A Google employee holds a sign during a walkout to protest how the tech giant handled sexual misconduct at Jackson Square Park in New York, Nov. 1, 2018.
Peter Foley/Bloomberg via Getty Images

Google may recently have stopped requiring arbitration for employee sexual harassment and assault claims, but mandatory arbitration clauses remain the standard for all other employment claims, the subsidiary told Bloomberg Law.

The use of arbitration agreements also is a popular trend for many other employers, with some 60 million workers currently covered by mandatory arbitration provisions.

“We use arbitration for most employment matters in the U.S. We believe this is most effective for all parties involved,” a Google spokesperson said.

Many major employers, including other tech companies that have done away with mandatory clauses on harassment, maintain arbitration agreements for most wage-and-hour and discrimination claims. The use of arbitration clauses to handle employment claims is becoming more prevalent in the workplace, sources told Bloomberg Law.

Plaintiffs’ attorneys and worker advocates are hoping employers will end the practice for all employment claims, saying it’s especially harmful for low-wage workers.

“It’s important for any reforms whether coming from companies or legislative reform to address all employment disputes,” Maya Raghu, director of workplace equality at the National Women’s Law Center, said. “Addressing them in isolation is not the most effective means in achieving reform.”

The Economic Policy Institute reports that 56 percent of nonunion private-sector employees are subject to mandatory individual arbitration procedures. That’s roughly 60 million American workers. Of those, 30 percent have signed agreements that include class-action waivers. A total of 1,530 establishments were surveyed, from which 728 responses were obtained, the report said. 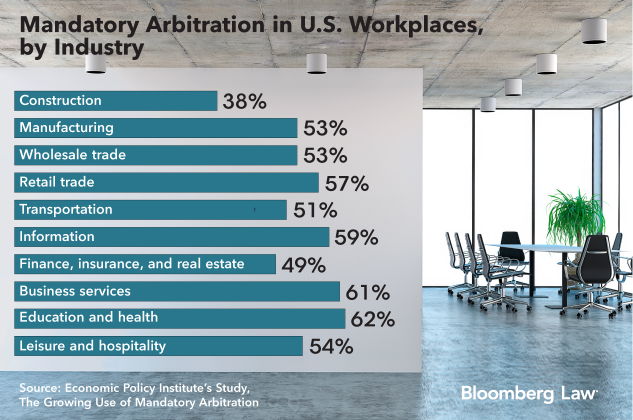 Bloomberg Law asked several major companies to respond to questions on whether they have mandatory arbitration agreements with their employees. 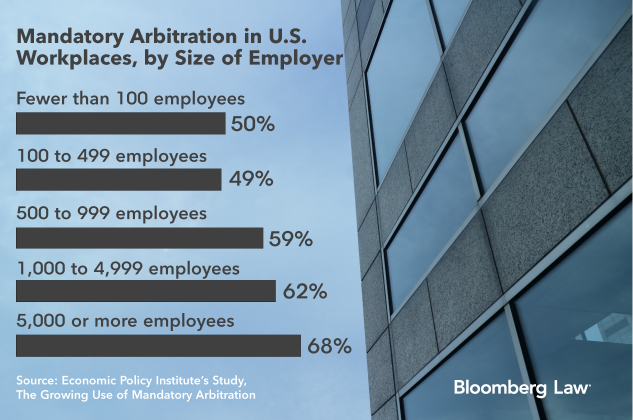 The U.S. Supreme Court case Epic Systems v. Lewis had a role in exacerbating the arbitration trend over the years. In that case, the court ruled that employers can enforce arbitration agreements signed by workers, even if they bar class-action claims.

David Garland, an attorney for Epstein Becker Green, noted there hasn’t been an increase in clauses for harassment and assault.

Employers and some management-side attorneys stand by the use of these agreements as a more convenient and occasionally faster way to handle employment disputes for both sides.

Google said those proceedings can allow the person who brought the complaint to remain anonymous.

Arbitration clauses are potentially problematic especially for lower-paid workers, Terri Gerstein, of the Harvard Law School Labor and Worklife Program, said. Finding a lawyer to take an arbitration case is difficult because the lower monetary returns make them less worthwhile than court cases.

“It’s not really an agreement in any meaningful sense of the word because people generally are told it’s a take it or leave it situation,” Gerstein said.

Many companies allow a short window of time for employees to opt out of an agreement, which could be as little as 30 days, before they’re stuck with it, she said.

Thirty days is a standard time limit, Ryan Bates, an attorney with Hunton Andrews Kurth, said. “I don’t see that as tricky or deceitful,” Bates said.

The nature of arbitration makes it less likely for a lower-paid worker to bring a claim, Justin Swartz, partner at Outten & Golden, said.

Many agreements require an employer to cover the cost of arbitration. When an agreement doesn’t explicitly prohibit a worker from pursuing a class action, workers may have to foot the bill, discouraging them from going forward.