Voters at a polling place in Madison, Wis., in April 2020
Photo by Andy Manis/Getty Images

Businesses in a majority of states have a legal duty to give workers time off to go to the polls next month, but the momentum for expanding voting leave laws has been limited, due partly to the pandemic-led growth of early and mail-in balloting.

Twenty-nine states plus the District of Columbia require employers to ensure workers have time off to vote on Election Day, and all but seven of those require that it be paid. That list of state mandates is largely unchanged in recent years, with the exceptions of the unpaid voting leave requirement Connecticut enacted in 2021 and Hawaii’s elimination of its voting leave law in 2019 when lawmakers created a statewide vote-by-mail system.

At the same time, a federal proposal to ensure workers have voting leave nationwide has stalled in Congress, where its sponsor said it’s still a priority for him but faces tough competition to get attention in the waning days of this congressional session.

The bill, H.R. 7489, hasn’t moved from the House committee where it was referred since it was introduced in April. Getting it attached to a larger legislative package could be one option for passage, said its lead sponsor, Rep. (D-Pa.).

“Voting is a sacred right for all—not a privilege for the wealthy few. And yet, too often hardworking Americans are forced to forgo this right because they simply cannot afford to take the time off from work needed to head to the polls,” he said via email. “There isn’t known organized opposition, but forward movement, as always, is a crowded path.” 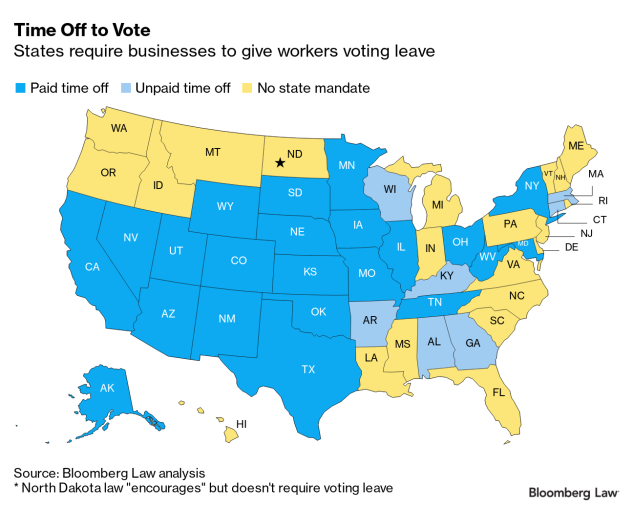 Cartwright has introduced the same bill in prior sessions but without success, including in 2017 and 2019. Congress has largely avoided passing any form of nationwide paid leave mandate on private employers—whether voting leave, paid sick time, or parental leave—although it came close in 2021 with a paid family and medical leave program that the House passed before it stalled in the Senate.

Unlike Congress, the executive branch expanded voting leave access for federal employees. The Office of Personnel Management announced in March that the four hours of paid voting leave offered to employees would apply to early voting, not just Election Day, and added four more hours annually of paid leave to serve as nonpartisan poll workers or election observers.

The legal requirements vary in states with voting leave laws. They often dictate that employers must provide two to four hours of leave. In some states, that mandate applies only if the worker doesn’t have an adequate block of time before or after work while polls are open.

Businesses have to navigate a variety of requirements in state voting leave laws, such as the number of hours mandated and notices to workers, said Chelsea Mesa, a labor and employment partner with Seyfarth Shaw LLP in Los Angeles.

“We do have a lot of clients that will take the best practices recommendation and do that nationwide everywhere they operate,” she said.

The states without voting leave laws include some of the most closely watched swing states such as Michigan, North Carolina, and Pennsylvania, while others such as Georgia and Wisconsin with notable US Senate races this year require voting leave but don’t require that it be paid.

Cartwright’s bill would require employers nationwide to provide at least two hours of paid time off to vote in any federal election.

Research suggests long wait times at polling places prevent some voters from casting their ballots, and that the problem disproportionately affects Black and Latino voters. In surveys cited by the Brennan Center for Justice, 7% of Black voters and 6.6% of Latino voters reported waiting 30 minutes or longer to vote, compared with 4.1% of White voters.

Providing voting leave is a relatively minor headache for employers, but it’s an important benefit that could make the difference between a busy working parent or caregiver going to vote or not, said Charles L. Thompson IV, a shareholder and co-chair of the leaves of absence practice at Ogletree, Deakins, Nash, Smoak & Stewart, P.C. in San Francisco.

The significance of voting leave has changed because of the pandemic and the heavier focus on voting by mail, said J.J. Huggins, a spokesman for Patagonia and project manager of the Time to Vote campaign that the company helped launch in 2018. Time to Vote is a business-led coalition aimed at getting companies to pledge they’ll provide their workers with voting leave, either paid or unpaid.

Nevertheless, the Time to Vote campaign and lawmakers such as Cartwright still see a pressing need to ensure workers have time off for casting their ballots—particularly hourly and service industry workers who might have less flexibility in their work schedules than office workers.

“We believe it is the hourly employees and the working class employees who need these programs the most,” Huggins said. “We’re still seeing a movement from a certain faction in this country that wants to make it more difficult for certain types of people to vote.”

“ and Carhartt are among the latest to join,” he said. “It runs the gamut from household brands like and down to local mom-and-pop coffee shops and everything in between.”

(Updated with comments from Charles Thompson IV and Chelsea Mesa)