Inflation-based minimum wage increases that are baked into many city and state laws cost businesses a few cents more per hour in a typical year, but this year’s unusually high inflation threatens to drive hourly wage jumps of $1 or more in some locales.

Automatic increases tied to inflation will take effect in about a dozen states in 2023, plus about twice as many cities and counties, most of them pegged to growth in the Consumer Price Index. Many of those states will make announcements in October or November of what new, inflation-based wage floors will be starting Jan. 1.

Large minimum wage increases could provide a boost to low-wage hourly workers, while putting an added financial strain on businesses that employ them. On the other hand, the steeper-than-usual increases might have limited impact in places where businesses already must pay above minimum wage to attract workers.

The annual inflation rate nationally stood at 8.5% in July, according to the latest CPI figures released by the US Bureau of Labor Statistics.

Denver is an early indicator of where minimum wages might be headed. The mayor announced the city’s minimum wage will rise to $17.29 per hour starting Jan. 1, up from $15.87 this year, an increase of 8.9%—more than triple a typical inflation-based increase, such as the 2.7% and 1.9% raises for Colorado’s statewide minimum in 2021 and 2022, respectively.

Cities and states included the automatic inflation-based increases in their minimum wage laws—mostly enacted over the past decade—with an eye toward helping workers keep up with the cost of living even if a future legislature or city council didn’t choose to set a higher wage rate, said Dori Goldstein, an employment law analyst at Bloomberg Law.

“I do not think they contemplated that inflation would be at the level that it is today,” she said. “As those numbers are announced, you should expect to see pretty big increases for every city and state that’s tied to inflation.”

For policymakers, the threat to small businesses’ budgets could inspire more cities and states to cap or otherwise revise their annual minimum wage increases, as with a recent ordinance passed by the city council in San Mateo, Calif. 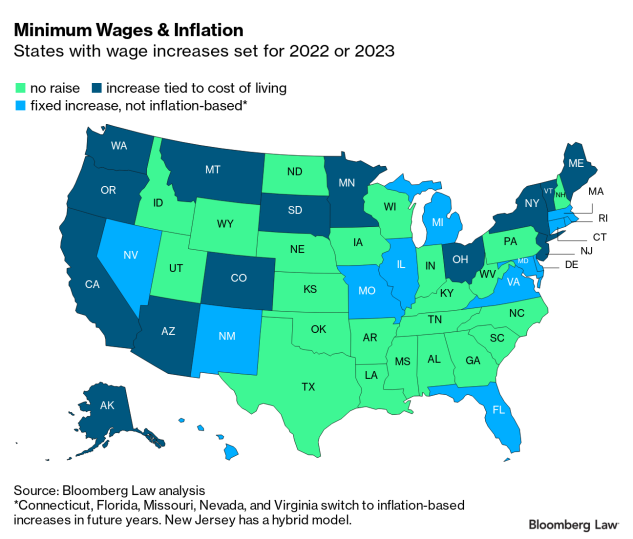 The amount of increases is likely to vary widely, said Sebastian Chilco, an employment lawyer with Littler Mendelson PC in California. That’s partly because some state and local wage laws call for using the consumer-focused CPI figures, instead of the urban workers figures, or CPI-W, that Denver used. Some look at a nationwide average of inflation for all major US cities, while others focus on a local or regional inflation rate.

Seattle; Flagstaff, Ariz.; and Mountain View, Calif., are a few of the cities set to announce inflation-based increases for Jan. 1.

“It’s hard to make an accurate prediction” on the size of increases for 2023, Chilco said, but it’s a safe bet they’ll be larger than in past years for many jurisdictions. Nevertheless, at least in the near term, the tight job market seems to be pinching employers on labor costs more than government-mandated wages.

“One of the common themes that I’m hearing at least in California, especially in northern California, as much as inflation is going up, it’s even more difficult to match the labor market,” he said. “That’s kind of a unique scenario because the job market is so tight.”

Any changes to minimum wages are likely to derive from state and local laws for the foreseeable future, as the federal minimum wage remains at $7.25 an hour, where it has been since 2009. A $15 minimum wage proposal by President Joe Biden and congressional Democrats failed to advance in early 2021, after the Senate parliamentarian ruled it didn’t satisfy Senate rules for inclusion in a budget reconciliation bill that would need only 51 votes, instead of the 60 votes needed for most legislation.

Several state and local laws include caps on inflation-based increases that can be applied in a single year—a feature that already has helped temper minimum wage increases in California and Minnesota, as well as Chicago and other cities.

Only California and Minnesota so far have announced new statewide minimum wage rates for 2023, since most states announce the rates closer to year-end. California caps the annual increases at 3.5%, and Minnesota caps them at 2.5%.

California’s law, however, includes a wrinkle for this year only that will force smaller employers to immediately catch up to the large-employer wage rate, which is rising to $15.50 on Jan. 1. For employers with 25 or fewer employees, that’s a jump of $1.50 per hour from their current statewide minimum wage of $14, or a 10.7% increase.

Those caps are relatively rare among the statewide laws, as not many state legislatures opted to include them when enacting higher minimum wages, Goldstein said.

“For the most part, they thought the inflation tie would be right on,” she said.

Employer size thresholds create another complexity for state and local minimum wage laws. In many cases, smaller employers might be subject to a lower minimum wage, Goldstein said.

Among the states to watch, 14 have minimum wage increases tied to inflation that are taking effect in 2023 (or Dec. 31, 2022, for regions of New York outside of New York City and Long Island). Another five states will begin inflation-based increases in future years, after finishing a schedule of fixed-rate increases.

Others with scheduled increases that aren’t tied to inflation include Illinois, Maryland, Massachusetts, Michigan, New Mexico, and Rhode Island. Likewise, Hawaii’s minimum wage rises to $12 an hour on Oct. 1, as part of a first-in-the-nation $18 minimum wage law the state enacted in June.

This year’s large inflation-based increases could motivate state legislatures and city councils to consider mitigation policies, such as capping the annual increases in cities and states that don’t already, Chilco said.

One unusual option that could inspire other policymakers recently surfaced in San Mateo, Calif., he noted.

Council members there approved a 3.5% cap on annual increases, but with a carry-forward or catch-up provision to allow excess levels of inflation beyond the 3.5% cap to be covered by future years’ increases.

“I’m wondering whether we might see something similar” in other cities or states, he said, “as kind of a compromise position for something that benefits employees but doesn’t make it unmanageable for employers to keep up with the increase in rates.”