“He’ll be able to do the job from the moment he walks in there,” said Communications Workers of America President . “I think there are lots of unions who would throw their support behind him.”

The president-elect, Shelton said, will “want a secretary of Labor who’s pro-labor, and I don’t know that he can find one that’s more pro-labor than Andy Levin.” 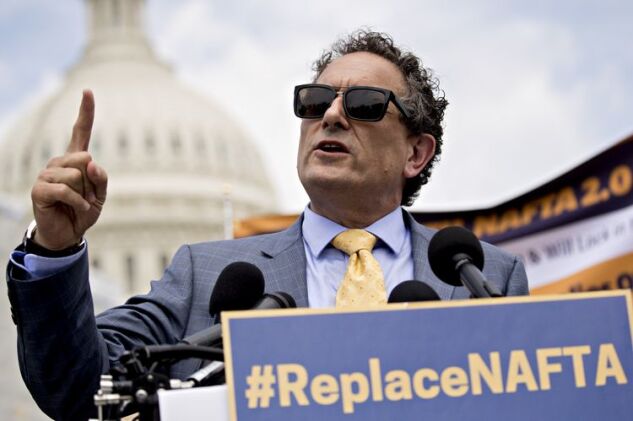 Shelton said he’s shared his support for Levin with the AFL-CIO, and will be making the case for him to the Biden transition team and to fellow labor leaders. After President chose management-side attorney to run the department, Shelton said, choosing a former organizer “would be a great contrast.”

The Biden transition didn’t immediately respond to a request for comment.

The AFL-CIO said Monday that it is not currently pushing any particular candidate. AFL-CIO President “wants a Labor secretary who will have clout with President-elect Biden, members of the cabinet, and leaders on the Hill so we are best positioned to move our agenda forward,” spokesperson Tim Schlittner said in an email.

Levin has been making the case for himself to labor leaders including Trumka, according to union officials. The congressman declined to divulge any such conversations, instead saying that he talks to union chiefs “all the time,” and that it’s “an honor to be mentioned” for the cabinet.

Biden “has an opportunity to create a legacy of lifting up the voice and power of working people in a way that can really be transformative for our country,” Levin said. “Whatever way I can help him do that, I’m going to put all of my heart and soul into it. I assume it’ll be in Congress.”

United Auto Workers Vice President said she encouraged Levin to pursue the position. “He’s from the labor movement,” said Estrada, who like Shelton sits on the AFL-CIO’s executive council. “He understands the fight that working people are up against.”

The UAW’s president Rory Gamble hasn’t yet surveyed the union’s board or recommended anyone to the Biden team, but “we highly respect Rep. Levin as well as others who have been mentioned publicly for the job,” UAW spokesperson Brian Rothenberg said in an emailed statement.

American Federation of Teachers president said last week that she’s been fielding calls from Levin supporters and from people advocating for other contenders including Vermont Senator and former acting U.S. Labor Secretary Seth Harris to get the top Labor Department post.

“I believe that a labor leader should lead the Labor Department,” Weingarten said, while declining to discuss the merits of particular contenders. She said it’s also important to pick someone who will have the president’s ear, and the “gravitas” to enact an agenda.

John Samuelsen, president of the Transport Workers Union, said he’d be thrilled to see either Levin or Sanders as labor secretary. “Andy’s a union organizer, and Bernie’s Bernie,” Samuelsen said. Still, he said, “almost any Democrat would be an upgrade.”

The National Skills Coalition, a group backed by business and worker advocates, also backed Levin for Labor in an Oct. 30 letter to the Transition Team, calling him a “champion” best-suited to help forge “a truly inclusive economic recovery.”

The Labor secretary oversees agencies responsible for key aspects of the Covid-19 response such as unemployment benefits and workplace safety enforcement, and handles hot-button issues like oversight of guest worker programs and whether gig workers are employees.

Others seen by some labor leaders as contenders for the post include , who leads California’s Labor and Workforce Development Agency, and , who directs Harvard Law School’s Labor and Worklife Program and served in the Labor Department during the Obama administration.

Levin is a former AFL-CIO assistant organizing director, Michigan chief workforce officer, and clean energy business owner. The AFL-CIO rated him at 90% on its legislative scorecard for last year, deducting points in part because he voted against Trump’s U.S.-Mexico-Canada-Agreement, which he said he feared would “perpetuate the harms of Nafta” for workers. While some labor leaders also opposed the deal, the AFL-CIO endorsed it, calling it “an agreement that working people can proudly support.”

International Association of Firefighters president , whose union was one of the first to endorse Biden when he announced his presidential campaign, said last week that he’s been sharing his thoughts on potential nominees with the leaders of the transition team, and that the former vice president has a “great depth of potential” appointees.

“Joe Biden will do what he did with his running mate,” Schaitberger said. “He will give it a lot of thought, not be pushed, not be hurried, and he’ll work his way through and then he’ll make the decision.”