A complicated legal landscape and changing attitudes toward marijuana use have employers have taking different approaches to testing employees. Some companies have stopped testing for cannabis, while others only test employees in safety-sensitive positions or provide job accommodations to medical marijuana users, attorneys say.
photo by BRENDAN SMIALOWSKI/AFP/Getty Images

A Delaware state court allowed a former employee to move forward with his lawsuit alleging the company violated the state’s medical marijuana law by sacking him for a positive drug test. That ruling, in December, followed decisions in three other states in favor of workers who either were fired or not hired because of their medical cannabis use.

The complicated patchwork of state requirements makes it difficult for multistate employers to adopt a single, nationwide approach, attorneys said.

The law and public opinion on marijuana have evolved significantly since 1996, when California became the first state to permit the use of the drug for medical purposes. Thirty-two states and Washington, D.C., now allow medical marijuana, and 10 states and the nation’s capital have legalized recreational use. Some 62 percent of Americans say cannabis should be legal, double the share who favored legalization in 2000, according to a 2018 Pew Research Center poll.

Prior to 2017, courts roundly rejected worker lawsuits challenging adverse employment decisions related to medical marijuana use, including state high courts in California, Washington, and Oregon. But that year, a Rhode Island state court ruled that a fabrics manufacturer couldn’t refuse to hire a paid intern who legally used medical cannabis, even though she wouldn’t pass a drug test. 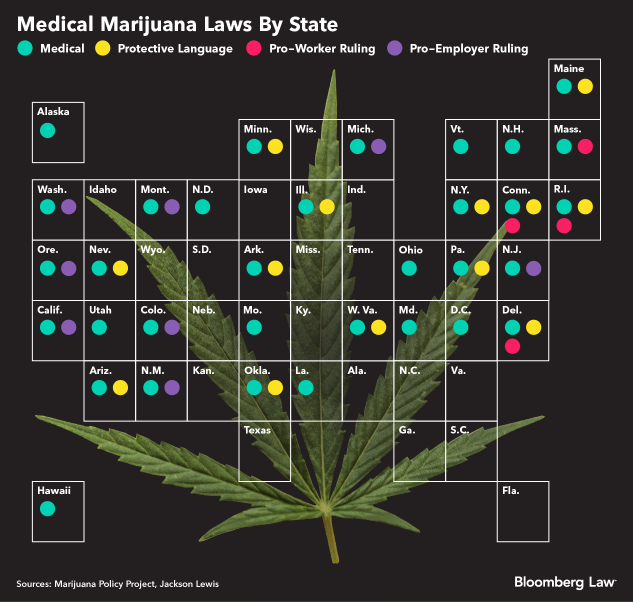 A federal court in Connecticut ruled in 2018 that the state’s medical marijuana law prohibited a health-care company from rejecting a job applicant who failed a pre-employment drug test.

Delaware, Rhode Island, and Connecticut are among the 13 states that have anti-discrimination protections in their laws specifically for medical marijuana patients. Some of the other states with such safeguards are New York, Pennsylvania, and Illinois.

The nature of the applicant or employee’s job is important when a company is deciding whether to test and if so, how, with safety being the key consideration, said , an attorney with Jackson Lewis. “Drug and alcohol testing is all about safety,” she told Bloomberg Law.

Given the complex legal landscape and the changing attitudes toward marijuana use, employers have taken different paths, attorneys said. Some companies have scrapped tests for cannabis altogether, while others only test employees in safety-sensitive positions or provide job accommodations to medical marijuana patients, they said.

Other factors can play into employers’ calculations. For example, a manufacturer in a state with legalized recreational marijuana found it couldn’t hire enough workers when it was screening for marijuana use, said an attorney with Ogletree Deakins Nash Smoak & Stewart. “My advice was to stop pre-employment testing and ratchet up testing for cause,” Clarkson told Bloomberg Law.


Evolution in the States

More legal safeguards for medical marijuana users could be on the way, said Faye Caldwell, an attorney with Caldwell Everson who specializes in workplace drug testing.

Early medical marijuana laws focused on compassionate use for terminal patients, but over time laws have shifted to broaden the conditions eligible for a prescription, allowing people to manage symptoms and remain in the workforce, said , director of government affairs for Americans for Safe Access, a pro-cannabis advocacy group.

Still, the legal protections are “somewhat limited,” Mangone told Bloomberg Law. Employers are still free to set up drug testing programs, and patients aren’t allowed to medicate on the job even if it doesn’t impair their performance, he said.

Worker attempts to find legal protections through other routes have thus far failed.

The Colorado Supreme Court, for example, ruled in 2015 that the state’s “lawful activities” statute didn’t prohibit Dish Network from firing a worker for failing a drug test. Medical marijuana doesn’t qualify as a lawful activity in that instance because it’s illegal under federal law, the court said.

However, other courts in states with similar protections for off-duty conduct might find that they protect medical cannabis use, said attorney Alisa Arnoff of Scalambrino & Arnoff. While many of those lifestyle laws specifically apply to tobacco use, statutes in states like Illinois and Minnesota are broader, Arnoff told Bloomberg Law.

In Arizona, a former sales director filed a lawsuit last year claiming the federal Americans with Disabilities Act protects medical marijuana use. But the plaintiff has abandoned the ADA claim and has focused on the anti-discrimination language in the state’s medical cannabis law, according to a January filing.