The meat-packing industry, a hotspot for the coronavirus and a flashpoint for the worker versus public safety argument, could soon explore new legal ground over when it’s appropriate to allow plaintiffs to sue anonymously.

Also known in the #MeToo context, anonymous legal claims can protect those who want to sue but need privacy. And that same shield could be used by meat and poultry employees, many of whom fear working at plants where more than 4,900 have been infected with Covid-19, according to the latest Centers for Disease Control and Prevention statistics.

Smithfield Foods is one of the latest companies to be accused in court of failing to protect its workers from the novel coronavirus. That case was dismissed before the court could rule on whether to grant anonymity to a worker in the suit, leaving unanswered questions about whether employees will be allowed to use pseudonyms for Covid-19 litigation.

Worker advocates say anonymous claims against meat companies will increase, as frightened employees sue over alleged negligence and seek safer workplaces. About a third of meatpacking employees are immigrants, including undocumented immigrants, another reason workers might want to protect their identities.

Management attorneys say allowing anonymous plaintiffs would complicate litigation. Without names, employers couldn’t trace Covid-19 through their warehouses, and an anonymous worker couldn’t be questioned in person during the legal process.

In fact, arguments from both sides mirror concerns brought during #MeToo litigation related to sexual harassment that has swept through courts in the past two years, where plaintiffs feared retaliation for stepping forward, or risked revealing information they wanted to keep private.

Litigation that involves an anonymous plaintiff is complex because different courts have different standards for when a pseudonym may be allowed, said Adam Pulver, an attorney at Public Citizen Litigation Group. “It’s a high burden to meet no matter where you are, and there must be a real showing that’s not just speculative, by showing past retaliation by the employer.”

In April, 19 states reported Covid-19 cases among U.S. workers across 115 meat and poultry processing facilities. Among approximately 130,000 workers at these facilities, 20 deaths have occurred as of May 1, according to CDC data. 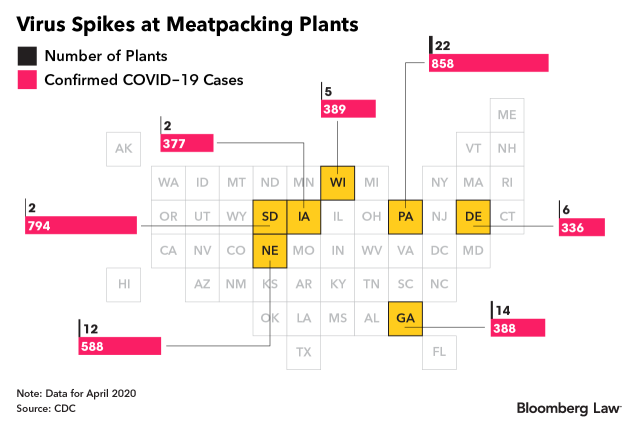 About 30 Jane and John Doe lawsuits across industries have been filed, as of May 17, with allegations tied to the pandemic, according to a search of Bloomberg Law’s court dockets database. They include employment, contracts, insurance, and other claims.

For instance, a Dallas restaurant worker brought a Covid-19 workplace safety related claim May 7 seeking an injunction against her employer, Hillstone Restaurant Group Inc., after the company refused to allow Doe to wear a mask while working. An attorney for the company declined to comment.

And on May 27, a fired John Doe with HIV/AIDS sued his employer, Dee Packaging Solutions Inc., claiming violations of the Family and Medical Leave Act and other coronavirus response laws. The plaintiff says once he notified his employer he was in a high-risk group for Covid-19, he was dismissed.

Anonymity during the Covid-19 pandemic will be particularly difficult to litigate because “occupational disease is much more difficult to correlate to a workplace,” Robert J. O’Hara, an employment attorney at Epstein Becker & Green P.C. in New York, told Bloomberg Law.

And performing discovery in a large meatpacking plant can be even more cumbersome, he said. “The challenge in a large factory is—where does that person work, can they speak with authority, or is there an isolated issue in the immediate space they’re working in.”

But meatpacking workers who have fallen ill, like Guadelupe Páez who works at JBS Packerland in Green Bay, Wisc., report difficulties getting tested, and slow company response to positive cases.

“They didn’t want to believe that I was sick, they just told me, ‘You have a cold,’” Páez said on a press call May 5. When he received his positive results, Páez told his daughter, who also works at the plant, that they had to let people know he had the coronavirus, because the company wasn’t communicating with workers about who was infected.

In the time since Páez tested positive for the coronavirus, workers’ demands have been met at the JBS Packerland plant, but advocates say safety measures are still evolving.

“There should be mandatory guidelines about higher-quality masks and significant improvement in essential workplaces before we even talk about putting everybody back to work,” said Christine Neumann-Ortiz, executive director of Voces de la Frontera.

Courts can consider different criteria when assessing whether a pseudonym is warranted, such as whether the person has a reasonable fear of danger if named, or if they’re at greater risk because the litigation involves a sensitive issue.

In the Smithfield dismissal, the judge said the public’s interest in Doe’s identity, and the prejudice to Smithfield in allowing her to proceed anonymously, was minimal.

“Courts have allowed, in various cases, immigrants to proceed under a pseudonym because they fear that using their real names in situations where they’re suing the government or an employer could expose them to a risk of harm,” said Michelle Lapointe, staff attorney at the National Immigration Law Center. “A fear of their immigration status being outed would put them at risk of arrest or deportation.”

There also is some precedent for allowing those plaintiffs to proceed under a pseudonym, Lapointe added. When several states passed “show me your papers"-style legislation aimed at cracking down on illegal immigration, such as SB 1070 in Arizona, undocumented immigrants challenging those laws were, in some cases, allowed to proceed anonymously, she said.

And before the Covid-19 pandemic hit the U.S., undocumented workers at meat packing plants already felt the pressure of staying invisible.

The Labor Department and the Occupational Safety and Health Administration have announced that they likely wouldn’t cite meat processing plants for health violations if those employers try in “good faith” to follow guidance from OSHA and the CDC. Increased regulatory focus on safety could mitigate the coming spike in worker safety lawsuits.

Rep. (R-Mo.) introduced legislation May 15 to further protect plants from future liability. “If our producers and processors are going to successfully weather the storm of the coronavirus pandemic, then meat processing facilities must have the ability to safely fulfill the federal government’s reopening mandate without fear of frivolous litigation that will cripple their operations,” she said in a statement.

Some employers fear that worker advocates and outside groups could further complicate Covid-19 complaints.

Charles P. Keller, an employment and safety attorney at Snell & Wilmer, said because these community activists usually aren’t collective bargaining representatives of the employees, they could “potentially try to impose their desires and beliefs of what is a safe working place with OSHA, and often call for “far greater safety measures that OSHA couldn’t necessarily enforce through the general duty clause citation.”

But according to David S. Muraskin of Public Justice, one of the groups representing the anonymous worker in the Smithfield case, “there’s this totally false belief that somehow they need to interrogate the worker to figure out if the worker has biases. It’s unclear to me how a worker’s love or hatred of the company could have anything to do with whether or not it’s spacing people apart.”

The decision in the Smithfield case isn’t the end of the road for workers trying to stay safe in the pandemic, NILC’s Lapointe said. But in a situation where OSHA has been slow to intervene, “I think we need to think creatively about other parts of our government that can be brought in.”

A search of Bloomberg Law’s federal and state court dockets for entries in which “work” or “safe” appear in the same paragraph as Covid-19 or coronavirus revealed 31 Jane and John Doe lawsuits tied to the pandemic, as of May 17.