Boston Mayor Marty Walsh’s working-class background and Everyman ethic may be his secret weapon if confirmed as U.S. labor secretary, giving him a way to relate to the average American in promoting President ‘s labor and jobs agenda.

Walsh, who awaits a confirmation vote by the full Senate after the chamber’s labor panel advanced his nomination last week, stands out among Biden’s Cabinet picks both for his lack of an Ivy League pedigree and his record of self-made accomplishments.

“He is, I think, a different figure than you tend to get in Washington,” said David Hopkins, a political science professor at Boston College. “He’s sort of a throwback to the days when the Democratic Party was full of people who came up through labor or through the working class.”

Walsh’s personal story of overcoming adversity sets him apart from the white-shoe lawyers who predominate in the Beltway. His image could make him a unique advocate for Biden’s policies, such as raising the minimum wage and strengthening union organizing rights, because he has the type of real-world credibility that no degree can confer.

Former Labor Secretary went to law school at the University of Chicago and had the benefit of a father who served on the U.S. Supreme Court, while his two predecessors, Alex Acosta and Tom Perez, boasted degrees from Harvard.

Walsh overcame cancer as a child, dropped out of college, battled alcoholism, worked his way up from laborer to a leader in Boston’s building trades unions, and then became a two-term mayor. He took night classes at Boston College to earn his degree at age 42, while also serving in the state legislature—and all along remained rooted in the working-class neighborhood where he grew up.

If confirmed, he’d be the first union member to lead DOL in nearly half a century.

Out of Biden’s 15 Cabinet nominees, only Walsh and Transportation Secretary Pete Buttigieg lack advanced degrees, but Buttigieg was a Rhodes Scholar who also attended Harvard.

Walsh as a politician is known as a consensus-builder who connects with people by listening to their concerns rather than pontificating about them—but those who know him warn against misinterpreting his accommodating nature.

“People have a tendency, particularly in an environment like Massachusetts—where there’s so much of the Ivy League highly educated—to underestimate what they’re walking into the room with,” said James Rooney, president of the Greater Boston Chamber of Commerce. “And that’s a mistake.”

Yet the same attributes that appealed to Biden when he was considering candidates for labor secretary also would raise the stakes for Walsh, if he gets the Senate’s blessing. He would have to form new alliances in a city where he’s never worked, avoid being seen as unfairly supportive of unions, and surround himself with sharp advisers to help him counter the workplace upheaval caused by the pandemic.

‘Back to Home Base’

Walsh’s trajectory was anything but linear. For example, by age 22, Scalia was already working as a speechwriter for William Bennett, education secretary under President Ronald Reagan. At the same age, Walsh was charged with disorderly conduct for arguing with a police officer and got shot in the leg after a night of drinking.

Walsh’s involvement in addiction recovery groups puts him in contact with a wider array of people in comparison to most politicians. As a state lawmaker, he was known for giving his cell phone number to homeless people struggling to get clean, and he regularly attends recovery meetings.

“It’s a big part of his identity,” said Mark Erlich, a former official for the New England Regional Council of Carpenters. 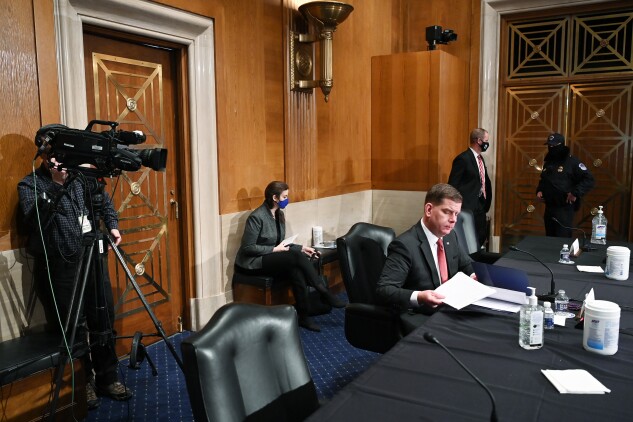 Marty Walsh packs up his notes after testifying at his confirmation hearing on Feb. 4.
Photographer: Mandel Ngan-Pool/Getty Images

Walsh’s upbringing was solidly blue-collar. His father, an Irish immigrant and member of Laborers’ Union Local 223 in Boston, was reduced to a fraction of normal lung function before his death due to years of inhaling asbestos and soot at work sites, Walsh recalled at his confirmation hearing Feb. 4.

It was one of several moments during the hearing when he connected his life experiences growing up in Boston’s hard-edged Dorchester neighborhood to issues he’d confront as labor secretary. At times, he previewed how he’d operate as Biden’s chief workforce adviser, such as pledging—after mentioning his father’s lung function—to “put rules and regulations in place that actually protect the worker up front.”

He said union-negotiated health care saved his life twice—once at age 7, when he was diagnosed with lymphoma, and in his 20s, when he sought addiction treatment.

Job safety requirements, a pension, and higher wages made possible by his father’s union membership helped his family live a middle-class life, he said, and informed his “deep belief” in the work of DOL.

“I was thinking about it last night as I was preparing for today, thinking about my role as the secretary of labor,” Walsh said in response to a question from Sen. Tim Kaine (D-Va.) on infrastructure. “And it went back to home base for me.

“I thought about my uncle and my father talking at the kitchen table on Sundays about fighting for the rights of workers, about making sure that jobs were there so that people wouldn’t be unemployed, making sure that they didn’t have to have benefit dances to support union brothers and sisters because their kids were sick or somebody died.”

Walsh spoke from personal experience when he discussed the need to strengthen vocational training, noting his lack of direction as a teenager. He discussed in passionate terms how substance abuse disorders are “held against workers their entire life,” and pledged to push for parity in treatment even if it makes people uncomfortable.

And he embraced increasing funding for community colleges, conceding that he was “not right” for a four-year school as a young man, dropping out after a year and a half.

“When you’ve grown up in that setting, you know what protections there are as workers—how important the union is in terms of having a voice at the table,” said Hilda Solis, President Barack Obama’s first labor secretary. “That’s a good combination to have when you’re going to deal with corporations or with management, and looking at regulations, how they impact workers’ everyday life.”

It’s hard to separate Walsh from Dorchester, a place where politics and unions were as revered as the Red Sox. Without that experience, he almost certainly wouldn’t have become the politician he is today, his associates say.

The neighborhood that shaped Walsh was “a tough place,” said John Tobin, an administrator at Northeastern University who’s known Walsh for years. “It was kind of gritty, like you would see in a depiction of a Ben Affleck movie about Boston in the ‘70s.”

Walsh relies on a network of informal advisers for advice, mostly people from his past who aren’t politicians and can keep him grounded, according to allies who speak to him regularly. He’s a prolific texter who responds almost instantly, even late at night, promising to call in the morning if he’s busy.

Even as Walsh rose though the ranks of Boston politics, he never really left Dorchester, where he owns a house with his longtime girlfriend and makes a point of patronizing local businesses—such as Doughboy Donuts & Deli in Dorchester, which he mentioned during his confirmation hearing (“Score one for the little guy,” the Boston Globe exulted).

As head of the building trades, he’d dine at least once a month with Erlich at a Dorchester bistro where his girlfriend once worked as a waitress. As she served them, the two would strategize about expanding unions’ reach in the city.

To Erlich, Walsh’s success was no shock. “It was very much in his blood,” he said. “He took to it, you know, very naturally.”