Labor Secretary recently said gig workers “in a lot of cases” should be treated as employees rather than independent contractors. But the real question is whether the Biden administration has the appetite for a high-stakes legal war with a gig-economy heavyweight, or whether it will opt for a more measured strategy.

While the U.S. Labor Department has had its fair share of strong-willed litigators, it has never felt compelled to take on the massive operational challenge of prosecuting a ride-share or delivery app behemoth for allegedly depriving workers of employee status, a designation that entitles them to minimum wage, overtime, and other workplace standards.

Digital platform companies label their workers as independent contractors, who don’t qualify for payroll protections under the Fair Labor Standards Act, and the distinction is a crucial element of their business structure at companies such as , Lyft Inc., DoorDash Inc., , and Instacart Inc.

Yet the Biden administration faces mounting pressure from the left to launch an enforcement investigation against a gig power, and if wage violations were found that would almost certainly lead to litigation accusing the company of misclassifying its workers. A victory would be a cornerstone in President ‘s pro-labor legacy, but litigation would entail a drawn-out struggle that could sap the department’s limited legal resources while subjecting the administration to an intense political and lobbying counterattack from the gig sector.

“Once they pick one of the big gig-economy companies to go after in litigation, that is a war. They’re not just starting a small battle,” said Tammy McCutchen, who was DOL’s top wage regulator under former President George W. Bush and recently retired as an attorney representing gig businesses. “They did not have the courage to start that type of war during the Obama administration. And is that something that Secretary Walsh wants to take on?” 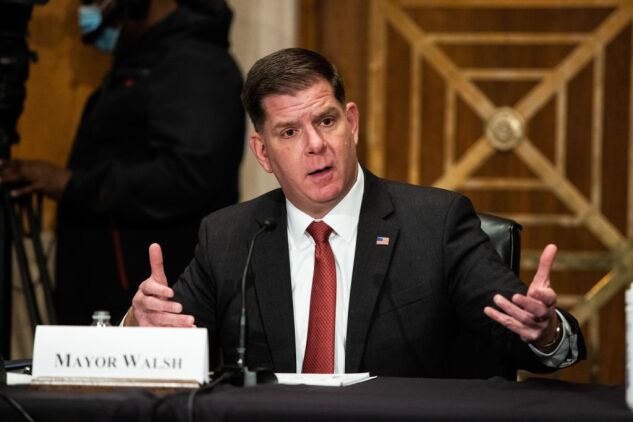 Walsh can choose from a playbook of other options that would have ripple effects on the gig economy without directly combating a major digital-platform brand. He could issue a regulation to impose a new, economy-wide interpretation of employment status, or investigate non-gig companies for employee misclassification.


Worker-rights attorneys are agitating for a bolder approach to halt gig companies’ state-level momentum. Walsh has authority to direct DOL’s Wage and Hour Division to begin a review of the gig sector without needing to first receive a worker’s complaint.

Thus far, the legal battle over gig-worker classification has been waged against Uber, Instacart, and others through litigation brought by private plaintiff attorneys and a few blue-state governments. A federal lawsuit, however, would have broader effects on the tech industry and other sectors that rely on independent contractors to reduce labor costs.

Several former veteran DOL attorneys said it would be admirable for the administration to challenge a gig company in court, but doubt it will happen. Congress, they say, is better situated to establish a boundary between employees and contractors.

“It strikes me that addressing these huge, huge gig-economy issues—it has to be done systemically, rather than by departmental litigation,” said Michael Felsen, a former DOL regional solicitor in Boston. “It’s not a realistic option, I don’t think.”

Walsh would need to decide if it’s worth committing enormous resources to a potentially yearslong lawsuit, given his limited litigation budget and staffing. He would have to weigh the political risk of taking on a company with a deep bench of high-powered lawyers and considerable popularity with consumers.

Litigation would involve investigators and attorneys in multiple DOL offices. That would detract from the agency’s ability to protect vulnerable workers in lower-profile sectors, such as agriculture and the garment industry, where use of independent contractors isn’t attracting nearly the same level of interest from the plaintiffs’ bar.

The Obama administration shied away from prosecuting an app-based company, preferring instead to target home health-care, trucking, construction, and other industries for misclassification claims. But the gig-worker landscape has shifted since then, spurred by state-level developments.

California voters last fall approved Proposition 22, a ballot initiative bankrolled by gig-economy giants that exempted ride-share and delivery drivers from a state law that would’ve converted them to employees. In return, independent contractors at those companies get a limited package of benefits.

A coalition of app-based corporations is now working to export that model to other states and, ultimately, the nation.

“This is a very urgent issue because the gig companies are not willing to wait for these issues to play out in the courts; they’re going out on the attack and they’re trying to aggressively change state laws,” said Shannon Liss-Riordan, a Massachusetts attorney who has built a nationwide practice out of suing gig corporations for worker misclassification. She advocates for Walsh to pursue litigation.

While worker advocates argue DOL has authority under existing law to accuse a gig company of misclassification, they concede the agency would have a better chance at prevailing in court if Democrats pass legislation to amend the federal wage-hour statute to adopt an “ABC test” for determining when a worker is an employee.

That would impose a strict three-part standard that assumes workers are employees unless the employer can prove the work falls outside the “usual course” of the company’s business.

But in a closely divided Congress, any overhaul of employment law would stall in the Senate as long as the filibuster is in place, which adds pressure on Walsh to take action in court.

Another factor that could influence DOL to take a more aggressive legal step is that class actions brought on behalf of gig workers have failed to gain traction due to the prevalence of mandatory arbitration agreements, in which workers waive their right to sue collectively. The federal government is immune to this restriction.

“The Department of Labor cannot just sit back and let this issue play out in private litigation when plaintiffs are blocked from even going to court to challenge their misclassification because of the ubiquity of arbitration agreements,” Liss-Riordan added.

If Walsh prefers to avoid a sweeping investigation of the gig sector, one of the department’s local wage-hour offices could still limit its scope by reviewing an individual delivery or ride-share driver’s complaint, and would very likely find that they’re an employee, said Catherine Ruckelshaus, general counsel at the National Employment Law Project.

The department teed up a broader reading of the term employee on May 5 when it withdrew a Trump-era regulation that would’ve made it easier for businesses to classify workers as contractors.

Walsh could replace that rule with a new regulation that would consider most workers as employees. That would adhere to a 2015 guidance document from David Weil, the Obama administration’s wage-hour chief. Weil, an ardent Uber critic, is Walsh’s choice to return to that post, and his nomination is pending White House clearance, Bloomberg Law reported in April.

Uber media representatives didn’t respond to a request for comment.

It’s up to Walsh to decide whether taking on Uber or one of its gig brethren is the best way for him to make his mark in Biden’s cabinet. Litigation against non-gig corporations to recover back pay and reclassify independent contractors remains a more conceivable, battle-tested route.

“It depends if the Department of Labor wants to spend the next few years trying to make its name directly affecting the gig economy or whether it wants to continue helping the entire economy,” said Dane Steffenson, who litigated wage cases at DOL for nearly two decades before joining management law firm Littler Mendelson last year. “I think it’ll be difficult to do both.”