Wall Street banks and the law firms that advise them are pushing to get employees back to the office.

Financial institutions like Goldman Sachs, Morgan Stanley and Credit Suisse are increasingly expecting their people to come in most of the week, lifting Covid-19 protocols and other hurdles for full-time in-person work. Most large New York law firms are sticking to three days of required in-office work, at least for now, save for a few fully remote outliers.

VIDEO: In December of 2021, leaders from some of the country’s biggest law firms shared their return to office plans and talked about whether hybrid work is here to stay.

“It wouldn’t shock me if law firms’ office attendance policies align more with those of their clients and in-office attendance requirements increase from where they are now,” said Neil Barr, chair and managing partner at Davis Polk & Wardwell. “But that’s more predictive for the industry than reflective of anything we’re thinking about right now.”

Davis Polk was one of the first Wall Street firms to bring its lawyers back, requiring employees to be in the office at least three days a week.

Firms vary in how strictly they’re policing employees’ schedules. Whether lawyers will face consequences for not showing up remains to be seen, particularly given the looming recession and growing rumors of layoffs, said Stephanie Biderman, a partner at legal recruiter Major, Lindsey & Africa.

“It’s going to be interesting to see how firms enforce the return to office in the next few months,” Biderman said.

Davis Polk first started bringing employees back to its Midtown Manhattan headquarters about a year ago, with a handful of trial periods and different configurations, Barr said.

The elite law firm, which has notched record profits over the last two years, eventually landed on having its lawyers and business personnel come into the office Tuesday through Thursday.

“In the context of what we’re coming out of, I think it’s going really well,” Barr said. “It’s not perfect, but the feedback that we get is overwhelmingly strong.”

“We’re able to observe much more by way of positive professional interactions on training, on mentorship, and, frankly, on the fun of the job,” Barr said.

“We wanted to do it in terms of thinking about how do we tailor it to the business needs, but also providing flexibility in a way that is constructive,” said Geline Midouin, Shearman’s chief people officer.

Shearman, like most New York firms, has employees commuting from all over the tri-state area, she said. “Being able to know that you have to be in the office Tuesday, Wednesday or Thursdays almost guarantees that you will have people in the office,” she said.

The legal industry’s workforce has consistently been returning to the office at a higher rate than others, according to Kastle’s Legal Industry Back to Work Barometer. The tool tracks anonymized activity of 341,000 unique office credential holders in major cities, nearly 32,000 of which are in the legal industry.

The average office occupancy for law firms nationally was 60.7% for the week of Sept. 21, compared to 47.3% average occupancy of all other industries for that week, marking the highest level of occupancy since the start of the pandemic. 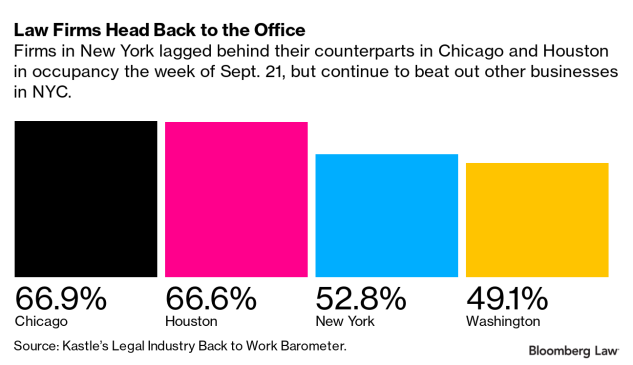 Law firms in New York had a 52.8% average occupancy during the same week, lower than in Chicago and Houston, but ahead of firms in Washington. Law firms were also slightly ahead of all other industries in the Big Apple, which averaged a 46.1% occupancy rate over the week.

“In New York, we’re all kind of living with [coronavirus] now,” Biderman said.

Shearman is encouraging employees to hit the office by providing opportunities for networking and training, including an all-associate happy hour, in-person mentoring circles, and live yoga and meditation sessions.

“We focus more on the carrot versus the stick and really thinking about how we can help our employees transition back into the marketplace,” she said.

But the firm also expects that lawyers will turn up more than three days a week when necessary to serve clients.

“There are times within our industry that, based on where we are in terms of the cycle of the matter, you do have to come in five days a week,” she said. “You can’t be so rigid with the three days a week at the expense of the client matters or the type of work that you’re doing.”

A top concern for law firm leaders has been training and development for junior lawyers who have worked remotely for all or most of their careers.

“We were beginning to get worried about it,” Barr said. “It was one of the reasons that we were so focused on getting people back in.”

Barr said Davis Polk has developed supplemental supporting training for the new associate classes that were fully remote. Beyond legal skill development, budding attorneys need to learn how to interact with one another in a professional setting, he said.

“Walking down the hall and asking someone how to do it or having to do it face-to-face rather than with a Zoom camera, that’s a skill set that needs to develop,” he said.

Office return plans stand in the shadow of rumored layoffs at several Big Law firms. Many firms that hired at a record pace in 2021 to match market demands now find work slowing.

Talks of cuts and scrutiny of billables may nudge people back to the office.

Partners want to see junior lawyers and other associates proactively take advantage of opportunities to make up for their lack of training over the past few years, said Jennifer Coffey, a New York-based legal recruiter for Macrae. Showing up in-person can be an important indicator to partners that those lawyers are committed to getting back up to speed.

“When associates start seeing their peers being laid off for performance reasons, they tend to double down on their work rather than look for another job,” Coffey said.