The fate of the Biden administration’s Covid-19 vaccination-or-testing rule may depend on the federal appeals court that hears the legal challenge to the emergency standard—and that tribunal will initially be chosen via a lottery, according to federal rules for multi-circuit litigation.

The emergency regulation issued by the Occupational Safety and Health Administration has already attracted four petitions for review from states with Republican attorneys general, which were filed in four circuits on Friday. Challengers have a 10-day window to file their petitions so they can be included in the lottery, which will determine which circuit court gets possession of the consolidated case.

The state petitions filed so far have landed in the Fifth, Sixth, Eighth, and Eleventh U.S. Circuit Courts of Appeal, each of which have majorities of Republican-appointed judges. Supporters of OSHA’s rule are expected to file in circuits that have more Democrat-appointed judges.

Where the case ultimately is heard could play a crucial role in whether OSHA’s rule survives review, given the inevitable variance in how judges view the proper scope of administrative agency power and the need for vaccine mandates. Favorable circuit precedent also could make a difference in litigation.

The regulation on vaccine mandates calls on employers with at least 100 workers to require their employees to get the shot or test regularly. The agency’s emergency authority allows it to issue temporary rules necessary to address a “grave danger.”

Partisanship is a rough proxy for how judges might react to OSHA’s vaccine mandate rule, with Republican-appointed jurists expected to be more skeptical than their colleagues who were selected by Democratic presidents, legal observers said.

Several circuits are dominated by Republicans, with none more than the Eighth Circuit, which has just one judge appointed by a Democrat. 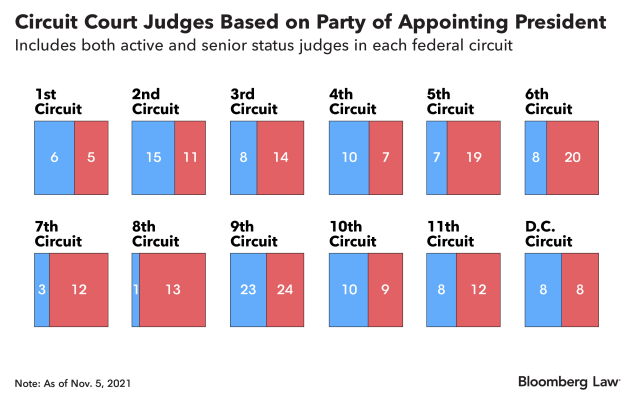 The randomness of panel selection and the differences in judicial philosophy among judges of the same party mean that the advantages to the case going to any one circuit are marginal, said Sidney Shapiro, an administrative law professor at Wake Forest University.

“Even though they’re marginal advantages, you don’t want to pass that up because the stakes are very high,” Shapiro said.

In terms of potentially useful precedent, OSHA has lost five of six challenges to its emergency rules.

Before Congress created the lottery system in 1988, parties raced to the courthouse to get their petitions for review stamped as early as possible under the rule that selected venues based on who filed first.

The Judicial Panel on Multidistrict Litigation manages the lottery process. In contrast to the procedure for trial court litigation filed in multiple districts, which gives the panel wide discretion and the parties a chance to make arguments, the panel randomly chooses the circuit that hosts litigation against an agency rule, said Elizabeth Chamblee Burch, a University of Georgia law professor who studies civil procedure and multidistrict litigation.

The panel’s rules call for selecting the court “from a drum containing an entry for each circuit wherein a constituent petition for review is pending.”

Litigants can’t sway the lottery by filing multiple petitions in the same circuit, as each circuit gets a single entry no matter how many petitions were filed there.

But the lottery doesn’t necessarily end the jousting over where a challenge will be heard, said Sean Marotta, an appellate attorney at Hogan Lovells. Parties can petition circuit courts to transfer the case elsewhere, he said.

Courts considering possible transfers weigh factors such as the location of parties and lawyers, whether a certain court has more familiarity with the issues, and court caseloads, Marotta said.

The lottery also doesn’t limit the power of circuit courts to stay the rule before the case is transferred away, he said.