In early 2018, members of the U.S. Department of Labor’s senior political staff arrived at work to discover their security codes to get into Secretary ‘s executive suite no longer worked.

Around the same time, some Trump appointees lost access to Acosta’s electronic calendar.

Most political employees within DOL previously enjoyed unfettered entry to the expansive chambers. In fact, the door was often left ajar. But from that winter day forward, no more than perhaps seven people—primarily members of Acosta’s inner circle whose offices are inside the suite—knew the new code. Anyone else had to ask an assistant stationed outside his door for permission to go in. Others started pulling favors to see what was Acosta’s schedule for a particular day.

“It is a fortress mentality. They don’t trust anyone else. Not just a senior career; they don’t trust anybody,” a current senior Trump official in the department said. “It seeps through the organization and that’s why the morale is low.”

A department spokesman said the codes were changed as a security protocol and that Acosta meets one-on-one with agency heads who request a sitdown.

Still, the limits on access symbolize Acosta’s moves over the last year to tighten control as much of his final authority on high-priority rulemaking has been usurped by acting White House Chief of Staff Mick Mulvaney, and as 19 House Democrats have called on him to resign over a decade-old plea deal he struck as a federal prosecutor with billionaire and accused sex trafficker Jeffrey Epstein.

An expanded policy office reporting to Acosta has consolidated power and effectively sidelined top lawyers and career civil servants at agencies that write rules and enforce laws protecting American workers, according to interviews with about 20 current and former Trump DOL employees, mostly senior executives in a mix of political and career roles. The details are substantiated by internal emails seen by Bloomberg Law, and by nine other sources who served in prior administrations and communicate with current staff. Most sources spoke on condition of anonymity out of fear of reprisal.

“With respect to rulemaking, Department of Labor agencies provide subject matter expertise and direction, the Solicitor’s Office provides the legal analysis, and the Assistant Secretary for Policy’s office advises on and coordinates policy development and departmental interagency process,” DOL spokeswoman Megan Sweeney said. “Therefore, it is common sense that the Assistant Secretary for Policy has a fundamental part in policy coordination.”

The department didn’t make Acosta available for an interview.

`Nobody Has Any Allies’

According to the current and former department employees:

The department didn’t directly respond to statements that Acosta conceals his rulemaking presence from underlings.

Officials close to Acosta said the policy office had to be expanded because delayed confirmations of key agency heads left critical decision-making gaps.

“Obviously that means that it takes additional resources” at the policy shop “to make sure the rulemakings that occur in those agencies that are without confirmed leadership get additional support,” said Nicholas Geale, who resigned as Acosta’s chief of staff last month.

The policy office’s empowerment and eight political hires under Berry also have coincided with a sharp uptick in senior staff turnover. 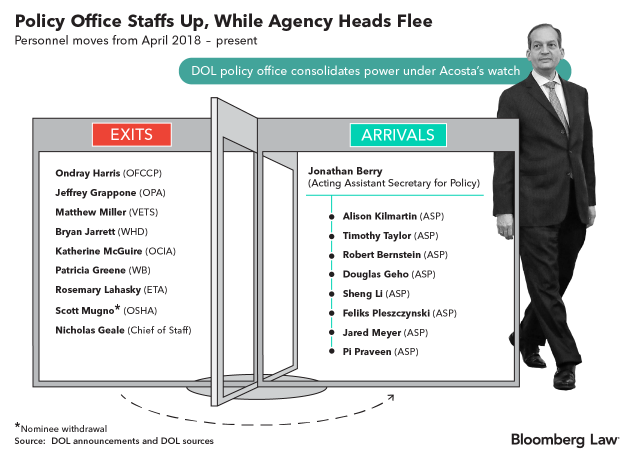 Geale left DOL on May 31 amid allegations by department colleagues that he was verbally abusive. This followed the departures of six permanent or acting agency heads and withdrawals of two nominees for department positions—all since January. Geale declined to discuss the circumstances of his departure.

A former law school dean who has demonstrated a career-long passion for the federal judiciary, Acosta came to Trump’s administration as a mainstream conservative and experienced public servant known for hearing out all sides of an issue before reaching a decision.

His pivot began, according to three current and former aides, when in February 2018 Bloomberg Law reported that he was personally responsible for removing data from the final draft of a proposed rule to make it easier for restaurants to distribute tips among employees, including to managers. The removed data projected the rule would lead to $640 million to several billion dollars in wages transferred from workers to their bosses.

The department’s inspector general launched an audit of the rulemaking and Democrats on Capitol Hill peppered Acosta with oversight requests. Eventually the secretary negotiated with Democrats on a revision to federal wage law that largely quelled the controversy. The audit is ongoing.

“He used to be a little less shy with respect to his micromanagement. He wasn’t trying to be so under the table about it,” a former Trump DOL official said. “But then when tips blew up, everything changed.”

About two months later, Berry transferred in from the Justice Department to take over the DOL policy office. Acosta chose Berry, who had clerked for Supreme Court Justice Samuel Alito, as did Acosta when Alito was a federal appeals court judge. 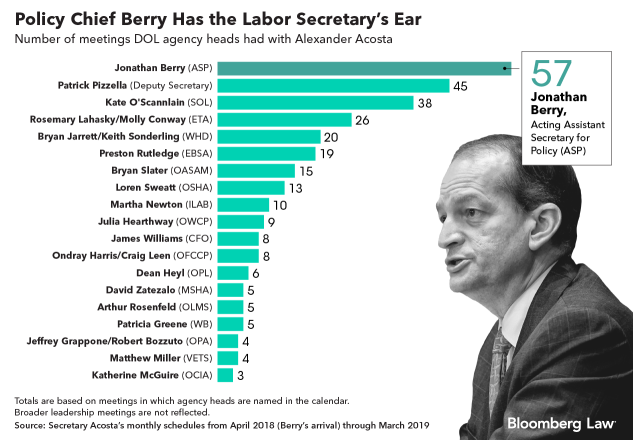 Berry and Acosta began staffing up the policy office with what Berry calls his “nerd squad:” conservative lawyers who, like them, tended to have Ivy League law degrees, Federalist Society memberships, prestigious court clerkships, and a few years as a big law associate, according to DOL sources and a review of their LinkedIn profiles and ethics disclosures. The new hires have little experience in labor law or writing rules and are mostly in their 20s and 30s.

“The nerd squad, as the title suggests, was my vision,” Berry said in an interview with Bloomberg Law. “I started in the role and came to appreciate in a new way the magnitude of the work that we’re trying to carry out. The Trump administration has a very aggressive deregulatory approach on its agenda. That means a tremendous amount of work in the rulemaking space. So I brought on additional attorneys ... to assist work alongside our fantastic career staff.”

Historically, the DOL policy office has an undefined role that varies depending on the secretary’s preferences. Generally, it has served as a regulatory hub to align subagencies with the White House, particularly on major rulemakings. Republican administrations have tended to give the office a more muscular stature, including some rule drafting, though several department veterans said Acosta’s policy office has assumed far more authority than in other GOP and Democratic administrations.

Berry’s office is now working on a so-called rule on rules that would enshrine the DOL’s process for interpreting and enforcing regulations. Three officials said they believe this regulation would formalize and further strengthen ASP’s clout. “We are looking at some kind of rule on rules, having to do with the proper use of subregulatory guidance,” Berry said.

Acosta uses the policy office to pass requests to agency heads and then to senior and lower-level career officials, sometimes causing his preferences and goals to be misconstrued in what one official called “a game of telephone.’'

The department and Berry didn’t respond to specific complaints of miscommunication.

“Everything goes through the policy shop and that’s how it’s channeled to the secretary; that’s his information conduit in terms of how he gets draft policies themselves and in terms of making his revisions and changes to the policies,” a former Trump official with direct knowledge said.

Acosta relays his feedback to Berry, agency heads or the solicitor, depending on the scenario, Berry said.

Berry didn’t address concerns that Acosta uses the policy office as a barrier but said, “It’s no secret that Secretary Acosta cares deeply about the rulemaking process or that he is a thoughtful lawyer who cares about getting things right. Yeah, he is seriously involved in the rulemaking process. Of course.”

Labor’s Solicitor’s Office, or SOL, is the government’s second largest legal staff, with more than 500 attorneys. An administrative order signed in 1940 by then-Secretary Frances Perkins, the namesake of the department’s headquarters building, declares, “All personnel of the Department of Labor employed in the capacity of attorneys or engaged in the performance of legal work in connection with any statute administered in the Department … shall hereafter perform their duties under the supervision of and subject to the direction of the Solicitor of Labor.”

The directive was designed to ensure the SOL can assess the feasibility and litigation risk of regulations or policy statements without feeling conflicted and pressured to advance an administration’s political goals.

But since Berry’s arrival, much of its regulatory work has been assumed by the policy office and advice from the solicitor’s office is frequently ignored, according to current and former department sources and other outsiders.

“We’re working very hard, spending huge amounts of time on weekends and evenings, and at the end of things,” the political leadership “would say we’re not taking your advice,” a former official said. “The workload is crushing and the fact that ASP is the one that usurps the legal advice space is very dispiriting as well.”

The SOL’s purpose is to engage in an attorney-client relationship with the regulatory agencies. But one former official said O’Scannlain saw her role as providing suggestions and less about being the final word on whether department policies can withstand legal scrutiny, opening the door for Berry to assume that role.

“Everyone has views, everyone has opinions,” Berry said of the SOL-ASP relationship. “At the end of the day, on legal matters, the Solicitor of Labor Kate O’Scannlain is the final word.”

Daniel Villao, who resigned last month as the department apprenticeship office’s deputy administrator, traces the sidelining of career and senior political employees to breakdowns that undermined a number of early policy initiatives, including an overhaul of apprenticeship programs ordered by Trump in 2017 that remains the centerpiece of the White House’s employment agenda.

The Office of Apprenticeship has rewritten the rule four times over the past two years, with career staff having limited say, Villao said. The proposal has still not been released.

According to Villao, the restrictions on information internally began after a few DOL regulatory plans leaked to the media in early 2018. Access to Acosta’s office and calendar were limited shortly thereafter.

“You have to rely on the internal knowledge. There is no agenda other than delivering the work that advances these programs for the American worker,” Villao said. “And I believe that there’s a failure to recognize that, and that’s what generates waste, miscommunication, and duplicated effort.”

— With contributions from Chris Opfer, Jaclyn Diaz, and Madison Alder