A member of a cleaning crew washes down a parking garage at a Vail Resorts Inc. property in Vail, Colo., amid an early coronavirus outbreak in March 2020.
Photographer: Michael Ciaglo/Bloomberg

In the Covid-19 pandemic’s first 12 months, only about 10% of federal workplace safety inspections were virus-related, and the likelihood of an employer being cited was well below the Occupational Safety and Health Administration’s typical rate for health-related reviews.

From the earliest days of the public health emergency last March through the end of February this year, OSHA had opened 1,771 virus-related inspections, out of a total of about 17,690 probes. The agency cited 370 employers for virus-related violations during that period, meaning an inspection resulted in a citation in only about 40% of those cases, agency numbers show. Historically, OSHA expects about 65% of health inspections to result in citations being issued.

For worker advocates, the numbers are proof that OSHA failed to respond decisively and that under the Biden administration the safety agency must be more active in targeting Covid-19 hot spots and issuing citations. Employer-side attorneys say the numbers demonstrate that most employers have tried to comply with non-binding safety recommendations issued by OSHA and the Centers for Disease Control and Prevention.

Underlying the contrasting opinions of OSHA’s performance is the bitter argument over the Trump administration’s refusal to issue an emergency rule that would have required employers to safeguard workers against on-the-job coronavirus infection.

As the one-year mark of the public health emergency declaration arrives this week, OSHA is expected to issue by March 15 its first Covid-19 emergency temporary standard. The rule is widely anticipated to mandate that employers treat CDC guidance as a requirement, not an option. 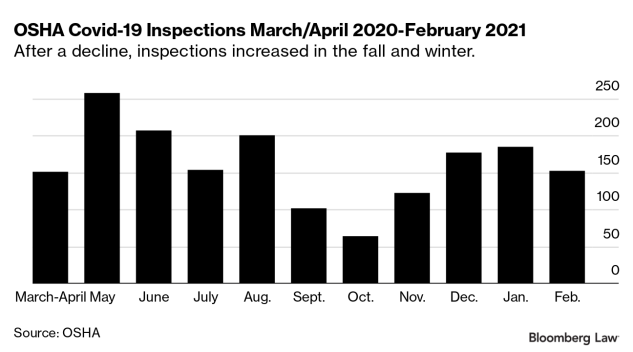 To be sure, the numbers aren’t a complete record of OSHA citations during the pandemic, and 28 states have their own occupational safety agencies.

Federal OSHA has by law six months to issue a citation after starting an inspection. The 370 employer figure, which is current through the end of February, doesn’t include pending inspections. For example, as of the end of August, OSHA had conducted 969 virus-related inspections, and any citations in those cases would have been due by early March. That means there are at least another 800 pending inspections related to virus enforcement for which citations may yet be issued, or not.

Among those that were issued, about 850 violations pertain to respiratory protection rules, and 145 are for violations of requirements to record worker deaths or illness. Tellingly, there were just four violations of the general duty clause, a provision of the Occupational Safety and Health Act that requires employers to provide a workplace free of known and correctable deadly hazards.

The Trump administration’s political leaders at OSHA and the Labor Department, which oversees the agency, argued an emergency rule specific to Covid-19 wasn’t necessary because inspectors could instead rely on that general duty clause. Former Labor Secretary also argued guidance was more effective because it could be adjusted as public health officials learned more about the virus.

Worker safety advocates maintain the Trump administration’s response was too business-friendly and put workers in danger.

“OSHA should have opened 10,000 Covid-19-related inspections, but they just went AWOL,” said Debbie Berkowitz, who was the agency’s chief of staff during the Obama administration’s first term and is now the National Employment Law Project’s worker health and safety program director.

A Department of Labor spokesman said in a written response that OSHA is reviewing its enforcement program and identifying changes that could better protect workers from infection.

“OSHA is doing everything it can now to re-affirm its commitment to worker safety and reestablish trust that it is advocating for workers,” the spokesperson said.

The 28 states that have their own worker safety agencies, including California, Michigan, and Washington, had opened 5,725 inspections through February, according to data collected by OSHA.

While up-to-date citation information wasn’t readily available for all those states, the California Division of Occupational Safety and Health reported it had issued citations in 161 cases as of Feb. 26, out of at least 2,233 on-site Covid-19 inspections.

OSHA citations have been comparatively low because employers are very aware of what the CDC and OSHA guidance calls for in regard to personal protective equipment, sanitation, and other workplace measures, said Gina Fonte, co-chair of management-side firm Holland & Knight LLP’s OSHA, workplace safety, and whistleblower claims team in Boston.

“There’s been a full-court press at the federal and state level on how to protect against this disease,” Fonte said.

There may also have been cases earlier in the pandemic when OSHA decided not to issue a citation because the employer had shown a “good faith” effort to comply with guidance and respiratory protection regulations, such as if shortages of N95 respirators were encountered, Fonte said.

Karen Tynan, a shareholder with Ogletree Deakins PC in Sacramento, Calif., said the workplace inspection numbers understate the scrutiny many employers are under, because the data doesn’t include visits and inspections by health departments. In California, local health departments receiving worker complaints are becoming more active in launching their own inquiries, she said.

Another compliance factor, Fonte said, was OSHA’s policy under the Trump administration to issue press releases listing all employers that had been cited for virus-related violations. Health-care employers, especially, don’t want the negative publicity or to have their reputations damaged by citations, she said. The Biden administration stopped updating the list in January.

A critical report from DOL’s Office of Inspector General last month faulted OSHA for conducting about 50% fewer inspections from February 2020 through October compared with the same period a year before, and for not making in-person visits for many of those inspections.

In response, OSHA pointed to development of a national emphasis program—requested by President Joe Biden and launched on Friday—that would target employers where large numbers of workers are at serious risk.

But Berkowitz, the Obama-era OSHA official, said the numbers also reflect the impact of a steady decline in the inspector ranks—a point that Biden’s nominee for labor secretary, Boston Mayor Marty Walsh, made during his confirmation hearing last month.

“You have a hollowed-out agency to begin with,” Berkowitz said.

OSHA numbers show that inspector headcount declined from 816 at the close of Fiscal 2014 to 752 at the end of Fiscal 2019. The agency had 790 inspectors when Fiscal 2020 ended in September. 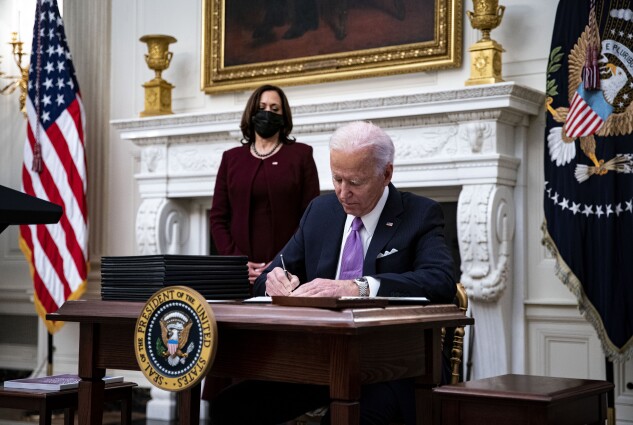 That attrition, Berkowitz said, was compounded by OSHA’s decision early in the pandemic for inspectors to do much of their work remotely. That meant virtual inspections were conducted in many cases when the agency received complaints about allegedly unsafe workplaces.

Berkowitz said numbers OSHA provided NELP showed about 20% of virus-related inspections in fiscal 2020 were done either fully or partially remotely.

“There is no such thing as a ‘virtual’ inspection,” she said. “Either the inspector goes on site and conducts an inspection, or they don’t.”

In announcing the national emphasis program Friday, the agency said it would adjust its enforcement strategy to conduct on-site inspections “where practical.” OSHA said some inspections would mix on-site and remote methods, adding that remote-only inspections would be conducted if a determination is made that it isn’t safe to send inspectors to a workplace.

OSHA’s statistics also showed that complaints and inspections have risen and fallen in parallel with national increases and decreases in Covid-19 cases.

After an initial surge through May, safety agency inspections declined each month until they hit a low of 64 in October, but then steadily increased as cases rose through January, when there were 185.

Monthly complaints peaked at a combined 3,030 for March and April 2020, and then declined until reaching 621 complaints in September; they averaged about 1,110 monthly for November, December, and January.

Altogether, OSHA received 13,791 virus-related complaints from April 20, 2020 to Feb. 28, resulting in 425 inspections. About 22% of the complaints involved health-care employers and 14% were for retail and food stores. Reports of employee deaths or hospitalizations of three or more workers were the most common reason for OSHA to open an inspection, leading to 949 cases.

(Updated with OSHA's announcement of national emphasis program in 22nd paragraph, and new protocol for on-site inspections in 29th paragraph. )