A woman walks with a sign supporting legalizing marijuana during the Democratic National Convention in Philadelphia on July 28, 2016.
Photographer: Spencer Platt/Getty Images

stopped testing for the presence of cannabis this summer, as did other companies facing a tight labor market and compliance challenges as more states legalize marijuana.

Amazon announced the change in its drug-use policy to the world. Other companies are keeping it quieter.

“In the past, like many employers, we’ve disqualified people from working at Amazon if they tested positive for marijuana use,” Dave Clark, Amazon worldwide consumer chief executive officer, said in a statement. “However, given where state laws are moving across the U.S., we’ve changed course.”

In Washington, the Senate’s proposed year fiscal 2022 general government appropriations bill that a committee summary said “encourages” the Office of Personnel Management, the federal agency managing government workers, to review its policies on hiring and firing individuals whose private use of cannabis is allowed under state law.

One state has already acted to ban testing employees for cannabis. New York’s labor department issued guidance Oct. 8 stating employers can’t test employees for cannabis use unless allowed to do so under an existing exemption. And New York employers “are prohibited from discriminating against employees based on the employee’s use of cannabis outside of the workplace, outside of work hours, and without use of the employer’s equipment or property,” the guidance said.

Continuing to test for cannabis use even when workers who test positive may not be impaired on the job could unnecessarily restrict labor pools at a time when many employers are challenged to find enough workers.

“Some of my clients that have removed marijuana from the testing panel, they’ve done so because they need workers and they don’t want to screen those people out” amid a tight labor market, said Denise Elliott, a McNees Wallace & Nurick LLC management-side employment lawyer. But those employers don’t necessarily want to advertise that they dropped drug testing, she said.

“I don’t think most employers want to broadcast their employment policies,” said Kimberly Kisner, a Pittsburgh-based Leech Tishman Fuscaldo & Lampl LLC employer labor lawyer. “They do go about it quietly,”

And since testing for cannabis can show someone ingested the drug weeks earlier, firing someone who tests positive might mean dismissing a worker who wasn’t impaired on the job.

“They’re faced with the problem of losing good employees and being unable, today in our current labor market, to hire good replacements,” said Jonathan Karmel, a Chicago-based lawyer representing labor unions. “Businesses can’t hire these days, like they used to do.”

Currently 36 states allow for the medical use of cannabis. An additional 18 states have enacted legislation to regulate cannabis for recreational use, according to the National Conference of State Legislatures. 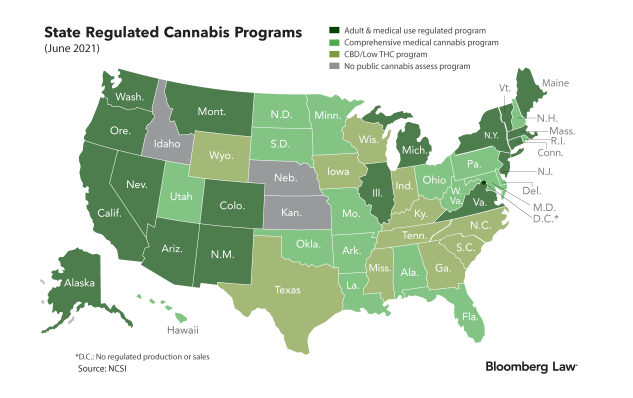 “I can see it makes sense for them,” Kisner said of Amazon’s decision to publicly announce the change in policy.

“They need the employees, they’re so large and in all these states, and they see the legal patchwork of state laws that make things more complicated for them in terms of having a policy regarding testing,” she said.

“They’re big enough, and bad enough, to come out and say that. Many smaller employers, they don’t want that type of publicity,” Kisner said.

About 10.4 million domestic jobs were unfilled as of Aug. 31, according to Bureau of Labor Statistics data. More than 40% of all of those jobs were in three sectors: leisure and hospitality (17%), health care and social assistance (16%), and retail trade (9%).

‘Focus on the Performance’

Companies like Amazon that employ workers in states where cannabis has been legalized and states that still outlaw the drug face additional challenges in trying to develop a consistent drug-use policy.

“The ones that are struggling are the ones that have multi-state operations,” said John Thomas, a McGuireWoods LLP associate in Tysons Corner, Va., who represents employers. “And they’re either having different policies for different states or they’re doing what I call ‘the least common denominator’” and “treat everyone like they live and work in the most permissive jurisdiction.”

Limits in knowing when a worker or applicant used cannabis is also an issue.

“We aren’t aware of any technology that does a great job” of distinguishing between “whether somebody has used a legal substance—or is currently impaired by it,” said Pat Devaney, Illinois AFL-CIO secretary treasurer. “I think that presents a challenge in tackling the issue in some of our collective bargaining agreements.”

Proskauer Rose LLP partner Allan Bloom said: “My general advice to clients is focus on the performance. Focus on the act, not the reason.”

“I hear anecdotally from our members that some employers are pulling THC from the panels and I hear that others are holding firm. This seems to largely depend upon whether or not employers feel their employees perform some type of safety-sensitive work,” she said.

Kisner said she recommends that corporate clients eliminate mandatory pre-employment and post-employment random testing for cannabis and only test those employees whose safety-sensitive job duties require it, when the company is a federal contractor, and when there’s an on-site accident.