The Biden administration has been mulling how bold it should be as it plans to overhaul the federal contracting process to provide greater protections for workers, resurrecting elements of a decades-long union crusade that fell short during the Obama era.

Through a series of executive actions that started Friday and are expected to continue in coming months, President will seek to fulfill his campaign promise to “ensure federal dollars do not flow to employers who engage in union-busting activities, participate in wage theft, or violate labor law.”

The plans, now under close review, were subject to debate inside the Biden camp since at least the start of the presidential transition, as aides and labor advisers weighed various policy drafts and proposals from unions and liberal advocates, according to five sources familiar with the process who requested anonymity because they weren’t authorized to discuss it publicly.

The discussions and analysis—customary in the review stage of any significant planned action—have centered largely on how the Biden administration can implement policies that deliver for workers and incorporate lessons from past failures, while girding against the potential for legal challenges, two of the sources said. For instance, some in the Biden transition were concerned that an overly union-friendly measure would be vulnerable to litigation, the sources added.

The directive Biden issued Friday to mandate a $15 minimum wage and emergency paid leave benefits for employees of government contractors was the administration’s opening move, and also one of the less legally complex actions being considered to leverage federal purchasing power.

The additional options in play include increasing transparency into companies’ past labor violations during the bidding for federal contracts; banning employers who obstruct union organizing drives from receiving federal dollars; pre-certifying firms as eligible to bid on contracts if they meet a base level of workplace wage, safety, and discrimination protections; and revising the contract bid evaluation process to eliminate unrealistically low offers from companies likely to exploit workers.

The outcome of the Biden administration’s procurement push—part of a broader initiative to use the federal contracting system to achieve climate goals and strengthen American manufacturing—may end up shaping the legacy of the new president’s labor agenda.

Some progressives remain hopeful that Biden’s ties to organized labor will lead to Congress enacting comprehensive changes to federal labor law. But others believe the president’s executive power to dole out roughly half a trillion dollars per year in contracts, from funds appropriated by Congress, presents a more realistic, shorter-term opportunity to lift union membership and protect workers on the job.

“One in every four workers is associated with a federal contractor. So one can make a tremendous impact on the lives of working men and women through improving the lot of federal contract workers,” said Lafe Solomon, a former Labor Department official who oversaw implementation during the Obama administration of a federal contracting executive order that was revoked when former President took office.

“It is an incredibly important thing to strive for, as far as I’m concerned,” Solomon added. “It’s just how you do it, is the issue.”

The politically powerful Service Employees International Union and the Communications Workers of America, along with left-leaning nonprofits such as the Center for American Progress and National Employment Law Project, are leading efforts to push Biden to pursue an ambitious program designed to enhance the lives of millions of workers on federal contracts.

The Biden administration is also facing progressive calls to launch a White House office that would be dedicated to promoting federal purchasing for the common good. The office would support agencies in prioritizing labor issues when awarding contracts. 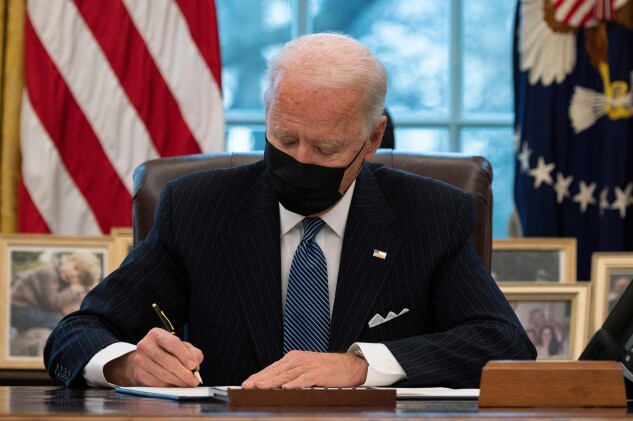 Yet after months of planning, it’s up to Biden to select from the vast playbook of options available to him.

But the Labor Department’s rule to implement that order took years to come to fruition and was summarily struck down by a federal judge. The Trump administration and Republican lawmakers then utilized the Congressional Review Act to overturn it in 2017, thereby foreclosing any future version in “substantially” the same form.

The question for Biden, given that history, is whether to take a bolder approach, including potentially revisiting the “high-road” strategy that former President Barack Obama’s labor advisers considered but ultimately rejected.

That model, which may be on the table, according to the sources interviewed for this article, would’ve certified employers as eligible to bid on federal contracts if they surpass a threshold level of workplace protections, such as paid leave, union neutrality, and bolstered job security.

“The devil’s in the details, and my guess would be that there’s some point system and maybe there’s even a ranking from an extraordinarily good employer down to a less good employer,” Solomon said. “There are many ways you could set it up.”

The National Women’s Law Center has urged the administration to ensure federal contractors don’t strip employees of their ability to enforce their rights in court by banning forced arbitration and nondisclosure agreements, said Emily Martin, the group’s vice president for education and workplace justice.

Anastasia Christman, director of the National Employment Law Project’s worker power program, said another Biden decree should mandate that companies bidding for federal work must “have in their employment contracts a just-cause standard for termination, which would just say that workers can’t be fired for capricious or discriminatory reasons.”

Even worker-rights attorneys acknowledge that such a union-neutrality clause could be struck down in court on the grounds that it’s preempted by the National Labor Relations Act.

The Biden administration has “a preemption problem on neutrality, as they are well aware, and they’re going to have a substantial hurdle to climb on any Administrative Procedures Act approach they take,” said Roger King, senior labor and employment counsel at the HR Policy Association, which represents Fortune 500 corporations. “They’re going to face almost certain litigation if they push the envelope inappropriately.”

The federal judiciary is also increasingly stocked with conservative Trump-appointed jurists, who’d be more inclined to agree with the business community’s preference for limited government intervention.

But Biden’s decision to fire a Trump-appointed National Labor Relations Board general counsel on his first day in office signaled a penchant for satisfying organized labor’s desires, regardless of legal risk.

In the eyes of the labor movement, how Biden will leverage his procurement authority is another pivotal test.

Martin, of the National Women’s Law Center, said the worker advocacy community is open to a range of approaches, but “most important is executive attention to the issues rather than thinking one relatively narrow solution is all that we need.”

“For example, increasing the minimum wage for federal contractor employees is critically important, and it’s also the case that if that were the only initiative, there would be a lot of pushback,” she added. “But I don’t see any reason to think that’s what they have in mind.”