Kerrie Campbell joined Chadbourne & Parke as a partner in Washington in 2014, and two years later a question emerged in her gender discrimination lawsuit against the firm: Did her role as a partner mean she was an employee or an owner at the firm?

The distinction is critical because only employees, not owners, have a right to file discrimination lawsuits under federal civil rights laws. The company argued Campbell, as a partner, couldn’t press the claim that women were paid and promoted unequally compared to their male counterparts. Campbell’s case isn’t unique. The question has continued to emerge in a spate of similar gender equity class actions filed against Big Law firms in recent years.

The answer remains elusive and hasn’t been fully vetted in the courts. The stakes are high, at a time of heightened scrutiny surrounding diversity and equality practices in the legal industry from both a string of private class action lawsuits and from federal regulators. Federal civil rights protections under Title VII of the 1964 Civil Rights Act and other federal statutes include a carve out for owners of companies.

Major law firms consist of hundreds of partners and often employ a top-down management structure, creating a legal gray area to determine who is a true owner. Attorneys pushing back against their firms have argued certain partners, both non-equity and equity, don’t have full control and should be considered employees. The defense side has argued that being a partner clearly strips an attorney of the right to file a lawsuit in court if they have an ownership role.

“The correct judicial or legislative clarification on this issue is key to turn the tide on deeply entrenched gender pay disparities and discriminatory practices in Big Law,” Campbell told Bloomberg Law. “No one should have to give up his or her rights to fair compensation, respectful treatment, and a safe workplace because they became an attorney and work in a law firm.”

The question of whether a law partner is an employee, and therefore whether she would be able to sue in court, wasn’t answered in Campbell’s case, but she reached a $1 million settlement with the firm, now Norton Fulbright Rose. 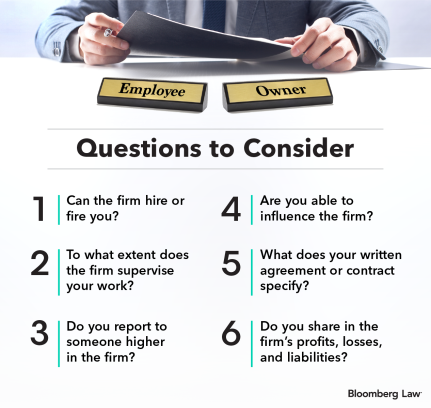 This probe comes at a time when women and people of color are underrepresented in equity positions at law firms, according to a 2018 study from the National Association for Law Placement. Craig Leen, director of the DOL’s Office of Federal Contract Compliance Programs, said at a recent event in New York that these numbers are glaring. He announced the agency would audit law firms that receive government contracts.

Leen said the agency would issue guidance on the question of partners as employees. He said in his view non-equity partners are employees. The agency, he said, would look closely at when associates are promoted to partner and what decisions go into that process.

“Generally, I do think we have a hook here, which is the promotion hook, and we are going to be pursuing that when we do look at firms,” Leen said. “As to whether an equity partner is an employee under OFCCP’s jurisdiction, we have not issued guidance on that point and I know there is substantial debate over that. We will be issuing some guidance at least so you will know our position and we can engage in a back and forth debate about that.”

A true partner, and therefore owner, must prove he or she has control, said Sanford Heisler Sharp chairman David Sanford. The real control, he said, is typically concentrated in a small number of people at major law firms. Sanford’s firm represented Campbell and her fellow partners, and has represented attorneys in class actions against major firms, including Morrison & Foerester, Ogletree Deakins, Proskauer Rose, and Jones Day.

The lawsuit the firm filed against Ogletree Deakins is in arbitration. The Morrison & Foerester and Jones Day lawsuits only represent associates, however.

“If firms have their way, very few people would be able to sue the firm as partners under the federal and state anti-discrimination statutes,” Sanford said. “That can’t be right given the reality of partner life.”

A 2003 Supreme Court case, Clackamas Gastroenterology Associates v. Wells, lays out a six-factor test to determine who is an employee a firm can hire or fire. While the court said no one factor in the test should be decisive, Sanford said those criteria provide a clear path to arguing for certain partners to file suits. Although Clackamas involved shareholders in a medical practice, it also has been applied in the law firm context, he said. These cases tend to be very fact-intensive.

In 2005, the Equal Employment Opportunity Commission brought a case against Sidley Austin Brown & Wood that took aim at the firm’s age-based retirement policy on behalf of 32 law firm partners. The U.S. Court of Appeals for the Seventh Circuit said the agency had the right to seek relief because they were employees and reinstate the partners who were demoted because of their age, but the U.S. Supreme Court declined to take up the case. The agency eventually settled for $27 million with the firm.

Since then, courts have had varying rulings on the question. In 2005, a federal courtin Detroit said an equity partnership didn’t necessarily mean a woman suing wasn’t an employee, but ultimately sent her case to arbitration. But in decisions from 2009 and 2011, courts sided with the firms in Pittsburgh and New York.

A California appeals court panel last year sided with Winston & Strawn partner Constance Ramos in a gender bias lawsuit. A San Francisco court had previously saidshe would have to fight her claim in arbitration, rather than court, because of a partnership agreement with the firm.

Most modern law firms don’t always operate in a manner in which all partners have equal control, said Joanna Grossman, professor at Southern Methodist University’s Dedman School of Law. Even equity partners can make a case, she said.

“The Supreme Court hasn’t answered the question for sure either way. What that leaves us from lower courts is room for argument, depending on the situation,” Grossman said. “It’s going to be a fact-intensive question.”

She said there are compensation disparities and representation differences at firms, even among equity partners. She said arguing for an equity partner to be an employee is a tougher argument, but not out of the question.

“A lot of what happens in discrimination is happening after people make partner,” she said. “It really matters. A lot of what is going on that is keeping the legal profession unfair and leading to entrenched problems of underrepresented of women and people of color and harassment is happening within the partnership.”

—With assistance from Chris Opfer