The gaming industry in Nevada could face a crackdown on workplace sexual harassment, which cocktail servers and housekeepers say is pervasive.

The Nevada Gaming Control Board is weighing policy changes in the wake of the #MeToo movement and misconduct accusations against Las Vegas casino mogul Steve Wynn, which he denies.

Regulators would require casinos to keep written sexual harassment prevention policies with reporting and investigation components and to report the number of harassment complaints against them annually.

Companies including and have supported the proposal. Others, such as Mesquite Gaming, say the regulations would duplicate existing worker protections.

Nearly 60 percent of cocktail servers and more than a quarter of housekeepers were sexually harassed on the job, including by guests, according to a survey of 10,000 Las Vegas casino workers released by the Culinary Workers Union Local 226 in May.

Union representatives called sexual harassment an “everyday indignity” in a letter to regulators. 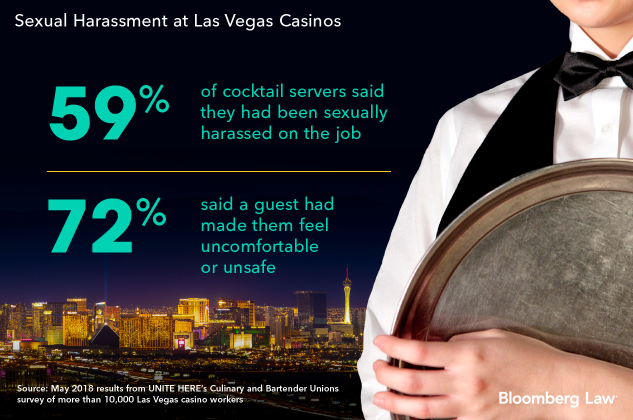 New reporting requirements would fall under existing rules that let regulators discipline casinos if they discredit the state or its gaming industry. The proposed policy would increase their oversight to mandate written policies that include elements such as descriptions of prohibited conduct and annual reviews of procedures. Licensees would have to submit a checklist each year that confirms they meet the minimum standards and includes data on valid complaints.

The requirements also would apply to gaming licensees with too few employees to be covered by federal law.

The board collected industry input for months and could provide a recommendation to the decision-making Nevada Gaming Commission soon, Chairwoman Becky Harris told Bloomberg Law, although she couldn’t provide an exact date.

Companies still would have to follow applicable state and federal anti-harassment and discrimination laws. The reporting would affirm to regulators that casinos are following laws that often are “not effective and not being complied with,” Harris said.

The changes under consideration by the gaming control board are a “big thing,” said Ann C. McGinley, professor at the University of Nevada, Las Vegas, Boyd School of Law. McGinley and her students have interviewed casino workers about sexual harassment in Las Vegas.

Regulators can give casinos extra incentive to address harassment above existing laws, McGinley said, because companies don’t want to jeopardize their gaming licenses.

“This can be used in a more powerful way,” McGinley said.

Sexual misconduct accusations by casino workers against Wynn, whose projects are credited with transforming the Las Vegas strip, rankled the gaming industry earlier this year. While Wynn denies the allegations, he stepped down in February as chairman and chief executive of Wynn Resorts, and the Nevada Gaming Control Board has an open investigation. 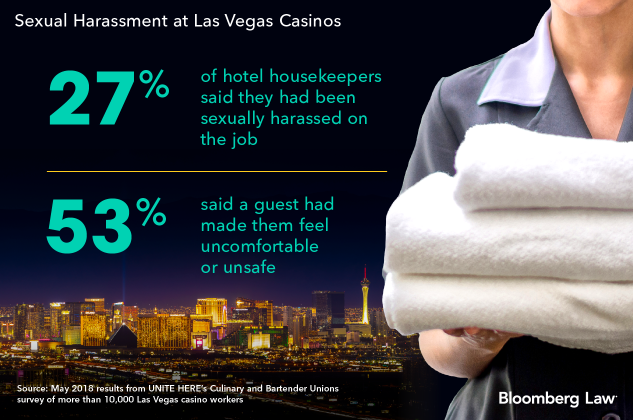 “We really want to know the reason for this,” Toti said.

Toti said Mesquite Gaming already reports the information under consideration by gaming regulators to the U.S. Equal Employment Opportunity Commission and Nevada Equal Rights Commission. She questions what gaming regulators do that those other agencies don’t.

South Point Hotel and Casino in Las Vegas also already has anti-discrimination and anti-harassment policies, Barry Lieberman, attorney for Gaughan South, which does business as South Point, told regulators at a September meeting, according to meeting minutes. The new sexual harassment proposal and checklist could go beyond the traditional role of gaming regulators, he said.

could implement new requirements quickly based on its existing policies, spokeswoman Kristin Koca told Bloomberg Law in an email.

The proposal by regulators also follows contract negotiations this year between casinos and Culinary Workers Union Local 226 that added sexual harassment prevention and worker safety provisions for tens of thousands of employees, union spokeswoman Bethany Khan told Bloomberg Law. The proposal by gaming regulators could offer workers an added layer of protection on top of an enforceable union contract, she said, although the union asked that guests and third-party contractors be included in sexual harassment prevention.

Those new contracts include language outlining zero tolerance for harassment by managers and coworkers as well as guests and VIPs, Khan said. Hotels also will be adding wireless safety buttons that housekeepers can wear and press to dispatch security to their location if they feel unsafe.

“The industry is going to have to deal with bad behavior by guests,” Khan said.

To contact the editors responsible for this story: at jcasuga@bloomberglaw.com; at jcoomes@bloombergenvironment.com