The three primary arbitral entities that resolve employment disputes have seen improvements in racial, ethnic, and gender diversity in recent years, but the vast majority of arbitrators remain white men. Moreover, the demand for diverse arbitrators to mediate disputes is often lacking.

The roster of arbitrators at JAMS is 28% women. The roster for the International Institute for Conflict Prevention & Resolution (CPR) is made up of 17% women, 13% of individuals who identify as ethnically or racially diverse; 31% of CPR panelists selected to serve as arbitrators are diverse. The American Arbitration Association said its roster consists of 25% women and people of color. The service providers didn’t further break down their diversity figures.

Employment arbitration claims reached an all-time high around 2015 and have been declining since, according to Bloomberg Law analysis, but many employers still include arbitration clauses in employment contracts.

Musician Jay-Z recently halted arbitration proceedings related to a dispute over his clothing line after he claimed there weren’t enough African-American arbitrators from AAA’s roster from which he could choose. 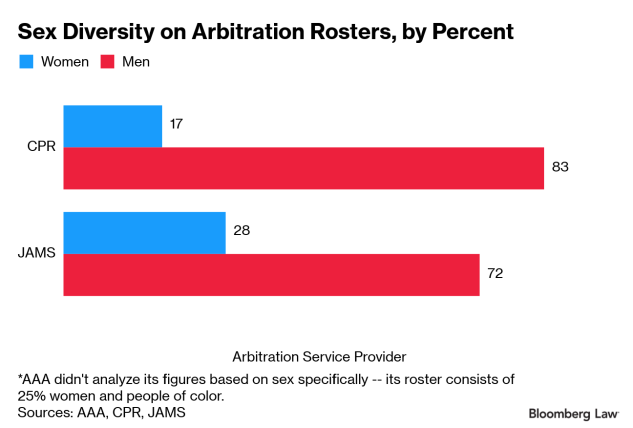 “We’re definitely looking at people who have reached partner level status or are retiring from the bench” and then become arbitrators, and the number of women, people of color, and women of color who reach that echelon is statistically small, Taylor said. “Our supply side starts to become more narrow,” she said.

About 2 percent of law firm partners are black, 4 percent are Asian, and 2 percent are Hispanic, according to a 2018 National Association for Law Placement diversity study.

Retired judges also commonly take on the role of arbitrator after departing the bench, Cole said, and that also isn’t a particularly diverse group.

The “pipeline is still a problem among the judges,” she said.

Arbitrator rosters are selected and curated by the arbitral entities, Taylor said, and they’re “very deliberate” about who makes the list.

“There’s not an application, there’s not a checklist,” she said. “We typically look for judges or lawyers who have excellent reputations in their communities.”

But the expectation of certain qualifications results in a cookie-cutter list of arbitrators, excluding women and people of color, according to Orna Artal, co-founder of dispute resolution firm Ramos & Artal.

“There is a kind of concept of who they think is a right fit for these spots,” she said. “We have to recognize that there are individuals that don’t have exactly” the education, professional experience, or professional organization memberships but would still make excellent arbitrators, she said.

Demand an Issue, Too

The supply side of the diversity issue is just one aspect, JAMS’ Taylor said. The demand side, or the process of both parties in selecting an arbitrator, more often than not results in the selection of a white, male mediator, she said.

JAMS tries to ensure that there’s a diverse list of arbitrators to select from, but beyond that, the final choice is made by the parties, she said.

“We really try to not have a list of all white men,” Taylor said, but sometimes the parties request specific qualifications, like a previous role as a federal court judge sitting in the Ninth Circuit, for example. “We do review those strike lists, and we do train our case managers to really make sure that we have a good cross-section of people,” she said.

Arbitrators are chosen by both parties from a list, which is compiled based on specific criteria. The parties then eliminate choices until a consensus is reached.

The parties are likely to select arbitrators who are known, and arbitrators’ reputations are built from either being selected often or from previous experience as a judge or partner, Cole said.

“It’s hard to select an arbitrator who’s not well-known,” Cole said. That might knock out women and people of color from being chosen, especially if they didn’t come from a background on the bench or at a well-known firm.

“To me, the burden is really on the lawyers who select arbitrators” to prioritize diverse candidates, Cole said. “At the moment of selection, be conscious of the issue,” she said.

Promoting women and people of color as arbitrators isn’t an impossible challenge, Artal said, offering a suggestion about how to do it. Highly complex cases might require a panel of three arbitrators instead of a sole mediator, and Artal wants to see the arbitral entities mandate that at least one of the seats on the panel be reserved for a diverse arbitrator.

Cole said that approach might work for massive cases, but that most employment disputes have only one arbitrator.

“There’s a presumption of a single arbitrator panel unless the claim is over a certain amount of money,” she said. “How often do you see a three arbitrator panel? I’ve only been on a couple in my life.”

Ultimately, it will be a heavy lift to level the arbitration playing field so that mediators more resemble the general population, Artal allowed. “The traditional biases that we have in society rear their heads in terms of selection of the dispute resolver,” she said.