Kathleen Kennedy Townsend during an event for her late father, Robert Kennedy, in 2018 in Arlington, Va. "So many people shy away from retirement, and that's not just individuals, but it's also social justice groups," she said in an interview.
Photo by Leigh Vogel/Getty Images for RFK Human Rights

U.S. Labor Department officials want to make retirement security a component of the social justice movement, tapping a distinguished policy advocate to deliver that message across the country.

Former Maryland Lt. Gov. will launch a speaking tour next week targeting advocacy groups and think tanks that can ensure affordable retirement policy solutions are included on their social-change agenda.

Millions of U.S. workers aren’t saving at all or aren’t saving enough for retirement, setting the stage for a generation of financially insecure retirees who could threaten to undermine future state and federal social safety nets. Those favoring a broad, federal approach to that problem were disheartened when a mandatory savings proposal died with President ‘s Build Back Better agenda last year.

“So many people shy away from retirement, and that’s not just individuals, but it’s also social justice groups,” she said. “So, one of the goals is to reengage social justice groups who have been talking about the $15 minimum wage, or paid sick leave, or that we need better health benefits, and to say, ‘Retirement should be part of that conversation as well.’”

Kennedy Townsend and Walsh will meet with American Federation of Teachers President , New York State Comptroller Tom DiNapoli, and U.S. Rep. (D-N.Y.) Monday to kick off the series of discussions. They will talk with other union leaders, the NAACP, and major retirement asset managers such as and , the U.S. Labor Department announced Friday.

In June, Kennedy Townsend plans to meet with Connecticut Treasurer and U.S. Rep. (D- Conn.) where she said she will emphasize the three-pronged approach to 401(k)-style saving amid waning pensions. 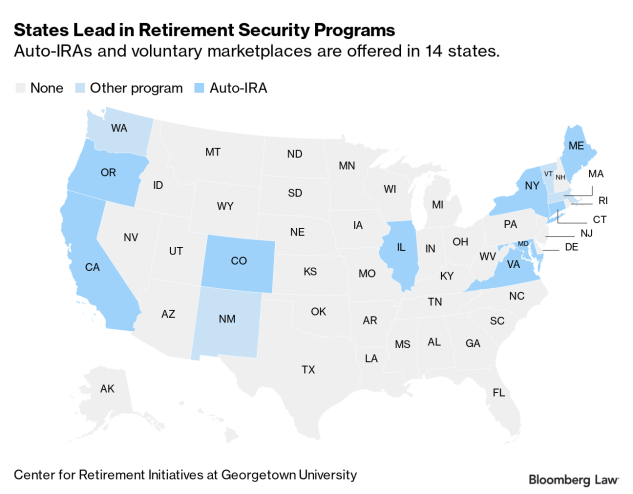 Only about half of American workers are participating in a retirement plan, and access to workplace savings is trending downward as companies make the switch from traditional, defined-benefit pensions to cheaper 401(k)s.

That evolution has highlighted disparities in the defined-contribution retirement market that disproportionately affect workers of color and women, who already earn lower wages on average and, in some cases, face discriminatory hiring practices.

Transforming lump-sum retirement benefits into lifetime income options should be top of mind, she added. “We want to make sure that everybody, wherever they work has the ability to get benefits.”

From State to Federal

After leaving state government in 2003, Kennedy Townsend spent much of her time focused on the U.S. retirement savings gap, particularly state-based initiatives that aim to help workers save when their employers don’t. She founded the Center for Retirement Initiatives to track those state-based strategies, and chaired a task force that established MarylandSaves, a workplace and emergency savings initiative slated to take effect later this year.

State automatic individual retirement account programs have blossomed since 2017, when OregonSaves launched the nation’s first pilot plan to capture workers who weren’t building nest eggs. Since then, 14 states have begun some form of government-sponsored auto-IRA or open marketplace savings plan.

Despite these efforts, Kennedy Townsend said, a federal retirement policy solution is still the best answer.

“My belief is that eventually it will be a federal program when you see the success of all these state programs,” she said. “It helps small businesses on one hand and it helps employees at small businesses save for retirement, which they weren’t able to do so easily before.”