Workers build the “Signature Bridge” replacement project at the junction of I-95 and I-395 in Miami in September.
Photographer: Joe Raedle/Getty Images

President , who is imminently expected to sign the $550 billion measure, will need to coordinate a government-wide effort to pay workers a prevailing wage on contracts financed by the legislation—an issue that plagued roll out of the American Recovery and Reinvestment Act, which then-Vice President Biden quarterbacked for the Obama administration.

The bipartisan infrastructure bill, Biden’s most significant legislative achievement as president, will require the U.S. Department of Labor to enforce a complex construction wage statute within the federal government as well as among the companies that land contracts to repair roads, rebuild airports, replace lead pipes, and erect broadband towers.

The task for DOL’s Wage and Hour Division will be to ensure that the federal agencies that write the contracts follow the 1931 Davis-Bacon Act, which requires a prevailing wage and fringe benefits for workers on federally funded construction projects. The law guarantees that workers on such projects are paid at least the local pay rates for similar work, as determined by WHD surveys.

The 2009 Recovery Act—the most recent major ramp-up of federal spending subject to Davis-Bacon requirements—showed compliance with the prevailing wage law can quickly turn into a nightmare for contractors and federal agencies.

Back then, WHD struggled to secure commitments on worker pay standards from government agencies that awarded contracts, such as the departments of Energy and Defense, in addition to companies that provided the services, according to Nancy Leppink, who was DOL’s acting wage chief at the time.

“If there isn’t buy-in, then you’re going to have a problem,” Leppink, now a senior adviser to Minnesota’s labor commissioner, said in a recent interview.

The agency ran into compliance woes stemming from companies and agencies having little background in the law’s intricate requirements, such as pay levels that vary depending on the type of project and job classification, she said. That was compounded by other problem areas, including limited availability of relevant or up-to-date wage surveys and shortcomings in agencies sharing wage data.

The problems fueled interagency breakdowns and debates over whether prevailing wage standards were applicable on particular projects. Ultimately, workers paid the price when Davis-Bacon wasn’t applied, lowering their pay.

Federal agencies outside the DOL that distributed contract funds and construction contractors often viewed Davis-Bacon as an obstacle, not a priority, Leppink said. This time around, getting contracting agencies on board “would be critical,” she added.

Today, the division’s ability to correct those flaws—while bolstering its traditionally limited bandwidth to investigate construction wage violations—will shape whether the infrastructure package Biden has championed is truly pro-labor. 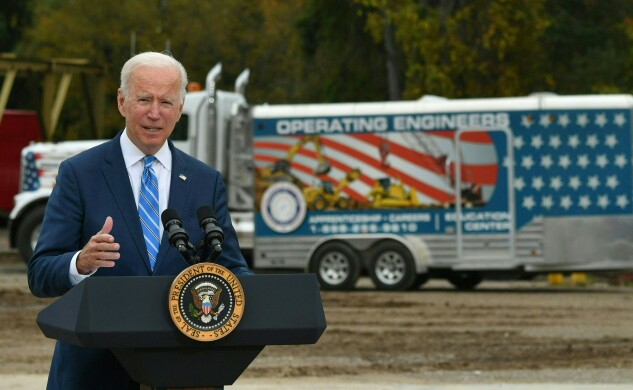 President Biden speaks about the bipartisan infrastructure bill and his Build Back Better agenda at the International Union of Operating Engineers’ training facility in Howell, Mich., on October 5.
Photographer: Nicholas Kamm /AFP via Getty Images

Building trades unions, an important organized labor constituency for the White House, have long viewed expansive application of Davis-Bacon and robust enforcement as a significant priority. Now, they see it as perhaps the element most critical to the bill’s success.

“For us, an infrastructure bill that doesn’t have Davis-Bacon is not a jobs bill, it is not a middle-class jobs bill,” Terry O’Sullivan, general president of Laborers’ International Union of North America, said in May, when Congress was negotiating the deal with the administration.

WHD has been preparing all year by learning from the systemic problems of a decade ago. That includes providing extra training for investigators on how to enforce Davis-Bacon; hosting a series of virtual seminars for companies, state and federal agencies, and unions; and improving how it works with outside agencies.

“We are shifting the way that we look at our interaction with our contracting agencies to really focus on them as a stakeholder,"Jessica Looman, WHD’s acting administrator, said in a recent interview. “If we can see them as an avenue to get it right on the front end, then we don’t have to come back in and do enforcement on the back end.”

Looman, an Inauguration Day hire who was formerly head of the Minnesota State Building & Construction Trades Council, is a Davis-Bacon specialist, but reforming attitudes in other agencies won’t come easy.

Looman said she’s focused on enhancing DOL’s rapport with labor liaisons at contracting agencies, to help them prioritize getting prevailing wages attached to federal projects from the beginning.

“We’re sort of re-investing and re-evaluating how we can make sure that we maximize that relationship,” she said. “The whole goal is to avoid crisis, concerns, emergencies.”

Leppink said that Looman, as she did, is implementing a massive infrastructure package early in a Democratic presidency after a Republican administration had allowed WHD’s investigator staffing to dwindle.

But Biden could be the crucial difference. While construction unions criticized former President Barack Obama’s dedication to organized labor, Biden has emphasized the need for all Cabinet members to appreciate the value of collective bargaining.

Another factor that could affect Davis-Bacon enforcement this time is that Labor Secretary Marty Walsh is a former Boston building trades leader, giving him first-hand experience of the law’s importance and shortcomings. 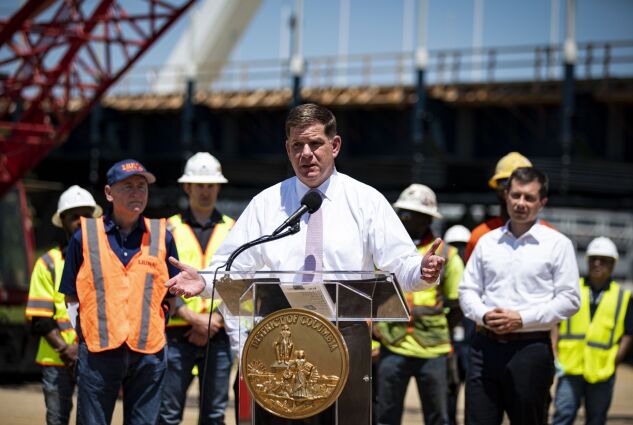 Conversations about Davis-Bacon standards took place with officials at other contracting agencies in 2009, and there was some communication from the White House about the issue, Leppink recalled. But the message wasn’t hammered home to agency contracting officers, who often disputed WHD’s assessments that contracts were subject to prevailing wage rules, she added.

Davis-Bacon problems and lack of available survey data delayed the start of some federal projects financed by the Recovery Act.

And, as a result of agency disagreements, some construction workers received lower hourly wages than the law would’ve provided, prompting administrative appeals and legal challenges from building unions. Meanwhile, contractors struggled with mixed signals on project labor costs as protracted litigation played out.

More often, contracting agencies and building companies got their way, said Terry Yellig, a former building trades attorney who retired in 2017. He recommended WHD lean on contracting agencies to a greater degree, noting that the complications experienced with the Recovery Act are endemic to Davis-Bacon, which has produced a “tug-of-war” between procurement agencies and DOL for decades.

“Most of the time, even when Wage and Hour makes a definitive determination” that Davis-Bacon applies, the contracting agency’s “attitude is, ‘Thank you very much, we’ll take it into consideration.’ That’s a built-in institutional problem,” Yellig said. “My criticism has been that Wage and Hour has sort of acquiesced to that arrangement.”

Looman is trying to win support as she navigates competing pressures from the building trades, construction industry, and agency partners at the same time that WHD is working on a regulation to update Davis-Bacon. That initiative could add clarity to the law’s application, but it’s also likely to ignite partisan controversy.

Looman didn’t convey exasperation when asked about the challenges ahead of her.

“We’re excited to make sure that the Davis Bacon requirements that are associated with this type of incredibly important infrastructure investment are both really understood by the entire contracting community, and then also implemented,” she said.

“So again, super excited,” she added.