Some vacancies follow the administration’s playbook, leaving major policy decisions up to Republican majorities or a small group of politically appointed leaders. But business and labor advocates said the personnel gaps have affected the pace and direction of policymaking and enforcement of workplace protections. They also could impact White House goals for deregulation.

The National Labor Relations Board, which enforces labor-relations law, will likely begin operating without Democratic members before the end of the year. Two seats remain open on the five-member Equal Employment Opportunity Commission, the agency that polices workplace discrimination and harassment.

At the Labor Department, the Occupational Safety and Health Administration, the main federal agency responsible for workplace safety, still lacks a nominee for its top official. The administration’s first choice, former FedEx official Scott Mugno, withdrew in May following 19 months in a Senate holding pattern.

Business and labor advocates said that when agencies are led by an acting leader or a half-full board, workplace protection investigations and regulatory moves are often limited. The vacancies come as the Trump administration is still trying to turn back a number of Obama-era policies and initiatives.

“The main consequence from not having a leader is the absence of change,” said Paul DeCamp, an Epstein Becker Green attorney who led the Labor Department’s Wage and Hour Division during the George W. Bush administration. DeCamp said agencies “can function just fine without a leader for a time by following the path” laid out by prior leadership, but acting leaders are less likely to push changes to policy or new legal interpretations.

The White House declined to comment on the vacancies.

Taken together, important positions at labor agencies are just 71 percent filled, according to a database maintained by The Washington Post and the Partnership for Public Service. 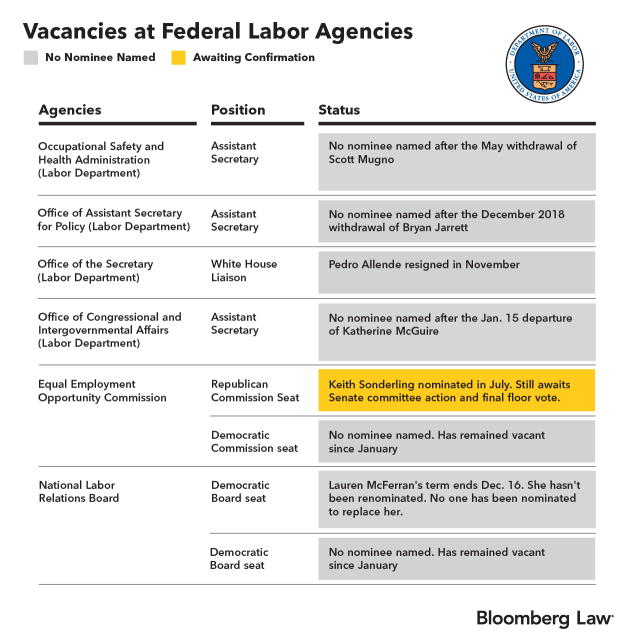 Some of the personnel hold-up comes from the White House.

Trump hasn’t nominated Lauren McFerran (D), whose term expires Dec. 16, for another stint on the NLRB, or tapped someone to replace her. The president also hasn’t picked anyone to fill another Democratic board seat and a similar vacancy at EEOC, both open since January.

Trump has made no secret of how he likes to handle agency-level staffing. Personnel is sparse because “we do not want or need as many people as past administrations,” he said in a Nov. 15 tweet in response to former U.S. ambassador to Ukraine Marie Yovanovitch, who had cited State Department vacancies during impeachment hearing testimony.

The Senate, where GOP leadership has instead prioritized judicial nominations, also has posed a bottleneck for some of the president’s nominations. Vacancies at labor agencies have persisted despite the Senate earlier this year approving a new process that shortened the amount of floor debate required before a final vote to confirm many types of nominees.

The Equal Employment Opportunity Commission is awaiting Senate approval of Republican nominee Keith Sonderling, who was tapped for the job in July and has yet to receive a confirmation hearing. The Senate will not tackle Sonderling’s nomination until next year.

There was rare movement to address labor nominations in the Senate last week, however, as a pair of nominees to serve on the Occupational Safety and Health Review Commission, which has lacked a quorum since the end of April, cleared committee on Dec. 3.

Business lobbyists are looking ahead to the 2020 elections. They want the White House and Senate to move quickly on nominations, especially Sonderling’s at the EEOC, where a Republican pick can finish out a five-year term, even if Trump isn’t reelected.

The EEOC has several significant policy decisions on its plate, including how to proceed with an initiative to require employers to submit equal pay data to the commission and what to do with information already submitted. It is also at the center of a Trump administration rift over LGBT discrimination policy. Those matters would be better handled with a full commission, said two business association lobbyists who spoke on condition of anonymity because of the sensitive nature of the issues.

Sen. Lamar Alexander (R-Tenn.), chairman of the Senate Committee on Health, Education, Labor, and Pensions, which handles most labor nominations, said previously he is “in talks” with the White House over the EEOC and NLRB vacancies. He declined to elaborate at the time.

“Whereas with labor secretaries and undersecretaries we probably approve too many of them anyway,” he said, adding that some of the open positions shouldn’t require Senate approval.

The Picture at DOL

The Labor Department, which operated with a skeleton crew earlier in the administration, is in a better place staffing-wise than it was in the beginning of the year. But it still suffers from openings in important posts, including the recent departure of Pedro Allende, who had been the department’s White House liaison.

New Labor Secretary Eugene Scalia, after two months in the department’s top job, will be taking stock in coming weeks of where to make personnel moves, a senior administration official told Bloomberg Law. The official declined to speak on the record because he was not authorized to discuss the matter.

In addition to the vacancy atop OSHA, other agencies within the Labor Department that have leadership openings include the Office of Assistant Secretary for Policy, Office of Congressional and Intergovernmental Affairs, and Office of Disability Employment Policy. ODEP has been without a leader since the Obama administration.

Veterans’ Employment & Training Services, a DOL agency that helps veterans, service members and their spouses find employment, had been without a Senate-confirmed leader since the Obama era until Nov. 21, when John Lowry III was confirmed. His nomination had been pending since 2018. The office is also without a deputy assistant secretary.

The process of filling personnel openings at DOL took a hit when Allende, the former liaison to the White House, left for the Energy Department last month. The White House liaison is typically instrumental in overseeing DOL nominations.

Business lawyers said the opening at OSHA has meant the agency has continued to focus on safety inspections as its primary enforcement tool, and that it has been slower than expected to cut regulatory red tape.

“I think in a Republican administration you’d see more focus on compliance assistance (as opposed to citations), but I don’t see that happening,” said Ed Foulke, an employer-side attorney with Fisher Phillips and former head of OSHA and the Occupational Safety and Health Review Commission, in reference to OSHA.

McFerran is likely to eventually be renominated for another five-year term at the NLRB, according to three sources from the labor and business community, granted anonymity to discuss the matter freely. The White House didn’t provide a comment when asked about possible renomination.

The five-member board will have just three Republican members after McFerran’s term ends. If the White House opts for an all-GOP board, it would have some recent precedent for support: The board made due with only three sitting members—all Democrats—for nearly eight months during the Obama administration.

The board is expected to continue overturning a slew of worker-friendly rulings from the Obama era, regardless of whether there are any Democrats to dissent. But former NLRB Chairman Mark Pearce (D) said those legal decisions are weaker when the board lacks its full complement of members.

“There is not going to be a molding of the opinion by the criticism of the dissent,” he said. “The dissent has value because the dissent raises issues and points out flaws in the majority’s rationale.”