Labor Secretary ’s longtime chief counsel when he was Boston mayor made his first foray into lobbying in late March and engaged the U.S. Department of Labor on behalf of more individual clients than any other federal lobbyist from April through June.

Eugene O’Flaherty is promoting a vast portfolio of business priorities before Walsh’s department—eight clients total, all heavyweight employers or industry groups, according to a review of second-quarter disclosure forms that his company, Ballard Partners, filed with Congress last week.

His contracts coincide with some of the most significant policy decisions Walsh faces as one of the Cabinet officials selling President ‘s plans for pandemic recovery and job creation, such as infrastructure financing and occupational safety.

Many of the business interests O’Flaherty represents promote an agenda that’s inclined to conflict with Walsh’s mandate from the White House to steer his agency in a pro-worker direction.

O’Flaherty, who was Walsh’s top attorney for all seven years of his Boston mayoralty, is working for delivery app DoorDash Inc., which deployed him to lobby DOL on “independent workers,” a classification that’s critical to the gig economy and that companies are counting on Walsh to maintain to limit their labor costs.

The second-quarter disclosures showed 393 reports as of this week describing outreach to DOL. O’Flaherty’s eight contracts lobbying DOL were two more than Josh Ulman and Andrew Siff, both established labor policy advocates in Washington, and Chris Andresen, who focuses on workforce development for Dutko Government Relations. 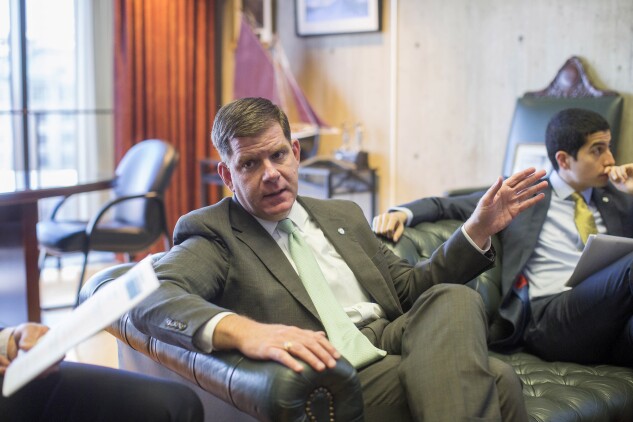 O’Flaherty’s connection to Walsh dates back to at least 1997, when they were part of the same freshman class in the Massachusetts House of Representatives. They served alongside each other in the legislature for 17 years, and the Boston Globe even reported that Walsh started dating Lorrie Higgins, his longtime live-in girlfriend, while she worked as an O’Flaherty aide.

Meredith McGehee, executive director of Issue One, a nonpartisan organization aimed at reducing big money in politics, said O’Flaherty and Walsh’s quarter-century of comradeship is problematic in the lobbying context.

Walsh and the department “need to bend over backwards to ensure—and assure the public—that there is no inside track here just because there was this prior relationship,” McGehee said. “Pawn him off on the assistant secretary who doesn’t know him.”

Yet there’s no evidence that Walsh or his department have given O’Flaherty’s clients undue influence. And it remains to be seen whether O’Flaherty’s established relationship with Walsh—and Dan Koh, who was Walsh’s chief of staff in Boston and now serves in the same role at DOL—will sway decisions at a department full of experienced leaders determined to improve workplace conditions.

The lobbying disclosures don’t specify which DOL officials have met with O’Flaherty, nor do they provide evidence that he’s lobbied Walsh directly.

Still, the onus is on the labor secretary, as the public official, to provide transparency, said Eleanor Eagan, a research assistant at the Revolving Door Project, which is run by the Center for Economic and Policy Research, a progressive think tank.

“It is not unreasonable to expect some acknowledgment” from Walsh “about the appearance of a conflict and some assurance that none exists,” Eagan added.

A DOL spokesman declined to provide an accounting of whether Walsh has had any meetings with O’Flaherty since he took office.

“Secretary Walsh and other members of the DOL team regularly engage with a wide variety of outside stakeholders and entities on a range of topics,” the spokesman said in a prepared response. “As part of that engagement, they work with the agency’s career ethics attorneys on how to appropriately interact with outside voices, so as to avoid conflicts both perceived or actual.”

O’Flaherty didn’t respond to three attempts to contact him via cell phone and email over the last week.

Most of O’Flaherty’s clients didn’t respond to requests for comment; two that did declined to say whether his ties to Walsh have furthered their lobbying agenda.

Ballard Partners—which is led by Brian Ballard, one of former President Donald Trump’s top fundraisers—announced O’Flaherty’s hire in March, promoting his relationship with Walsh. Six of O’Flaherty’s clients were signed after he was hired.

The company declined to comment on any contact O’Flaherty might have had with Walsh, but said his “stellar reputation and experience” make it “no surprise that he has been sought after by many public policy stakeholders to assist them with important matters before the new administration.”

Other clients that retained O’Flaherty on DOL issues in the second quarter include the American Road & Transportation Builders Association, to discuss how to pay for Biden’s infrastructure plan; the Association of Dental Support Organizations, for work related to DOL’s Occupational Safety and Health Administration; BCFS, which operates multiple detention centers for migrant children, concerning DOL’s application of wage protections for federal-contractor employees; and investment bank CSG Partners, to engage on employee stock ownership plans amid the firm’s legal battle with DOL on the same topic.