Labor secretary nominee Marty Walsh presented himself as a unifier during his Senate confirmation hearing, pledging to partner with Democrats to advance a robust worker advocacy agenda while also expressing an openness to collaborating with Republicans and respecting employer concerns.

The Boston mayor faced subdued questioning over the course of more than two hours of testimony before the Senate Health, Education, Labor, and Pensions Committee, earning commitments from the panel’s Democratic and Republican leaders to expedite his nomination.

Walsh, a former construction union leader, sought to forge alliances with Democrats on raising the minimum wage to $15, improving racial and gender disparities in the workplace, and bolstering the U.S. Labor Department’s enforcement presence to protect employees from contracting Covid-19 on the job. A few of the committee’s Republicans tried to knock Walsh on Biden administration policies and priorities that they felt would hurt the economy; but, overall, GOP members appeared pleased with the nominee’s efforts to work across the aisle despite their differences on union advocacy and regulation.

Walsh embraced an urgent response to the pandemic that would help all workers without short-circuiting business recovery. He backed regulations to protect workers from contaminants at job sites, additional federal investments to hire more workplace safety inspectors, federal procurement changes to benefit workers, and increased job training and re-skilling efforts.

Before Walsh delivered his opening statement, Sen. (R-N.C.), the committee’s top Republican, indicated Walsh has a promising path to confirmation.

“This is a job that needs to be filled today,” Burr said. “I expect by the end of this hearing I’ll be able to support your nomination. And I will encourage my colleagues on this side of the aisle to support you as well.”

Walsh presented himself as someone whose uphill personal journey and worker-oriented political career make him uniquely qualified to serve as U.S. labor secretary. A recovered alcoholic who first earned a college degree at age 42, Walsh said his life story informs a “deep belief in the work of the Department of Labor.”

Rattling off such DOL agenda items as fair pay, unemployment benefits, continuing career education, and retirement security, Walsh added: “These are not just policies to me. I’ve lived them. Millions of American families right now need them. And I’ve spent my entire career fighting for them.”

He espoused an inclusive vision for labor and employment policy. “I am committed to making sure that everyone—including veterans, LGBTQ Americans, immigrants, and people with disabilities—gets full access to economic opportunities and fair treatment in the workplace,” he said.

The two-term mayor, a former Boston building trades leader and Massachusetts state representative, must win majority approval from the Senate panel before he can advance to the floor for a full-chamber vote. The committee scheduled a vote for Feb. 11.

Walsh showed his skills in retail politics and turned the hearing into more of a running conversation than an interrogation. He struck a conciliatory tone at times while responding to questions.

Multiple Democratic senators advocated for the Occupational Safety and Health Administration to develop an emergency virus standard that would require employers to take steps to protect workers from infection. Walsh didn’t reject those calls but he made clear that OSHA should help employers in addition to protecting worker safety.

OSHA “is an agency that is there to help workers and help employers, and not be put in the middle of both,” he said.

In response to a question from Sen. (D-Wis.), Walsh pointed to Biden’s call for resources to hire additional OSHA inspectors. He said OSHA’s inspector ranks are down about 500 positions over the last four years, and argued that if the federal government imposes an enforceable workplace virus rule without boosting the number of inspectors,"we don’t protect the American worker.” 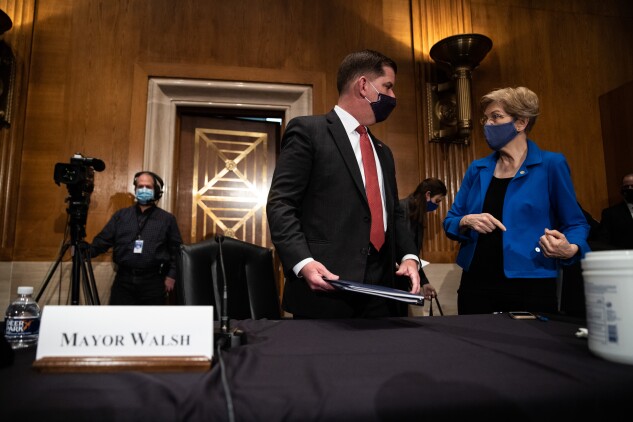 Marty Walsh and Sen. Elizabeth Warren (D-Mass.) confer during his confirmation hearing. Warren introduced Walsh to the Senate labor panel at the start of the hearing.
Photographer: Graeme Jennings-Pool/Getty Images

Walsh expressed openness to a range of options to raise the federal minimum wage, saying he supports Biden’s call to elevate it to $15 an hour but also acknowledging that the decision will be left largely to Congress.

Throughout the hearing, Walsh displayed the consensus-building approach that’s helped his nomination avoid an aggressive opposition campaign from Republicans.

“If confirmed, I pledge to lead this work in partnership with workers and businesses; states, cities, and tribal territories; employees in every agency of the Department of Labor; the Administration and members of Congress from all parties; and all the members of this Committee,” Walsh said in his opening remarks.

‘Stronger and Fairer for All’

Burr said he hopes Walsh remembers that, if confirmed, his role will be to confront labor unions when necessary and not succumb to the interests of trial attorneys.

“We cannot open the door of the Labor Department up to people who want to make enemies of job creators,” Burr said.

Committee Chair Sen. Patty Murray (D-Wash.) said she wants her panel to advance Walsh’s nomination as quickly as possible. Walsh’s presence at DOL is necessary to assist workers whose struggles during the pandemic have been exacerbated because the Trump administration was focused instead on catering to corporate interests, she said.

Workers “need a secretary of labor like Mayor Walsh who will act quickly to keep workers safe, defend and expand workers’ rights, and be a partner in helping our economy come back stronger and fairer for all workers,” she said.

Walsh committed to supporting states that are having difficulty meeting the pandemic-fueled surge in unemployment insurance claims, their troubles largely a result of antiquated processing systems.

“Not only do I support the federal government helping, it’s a necessary step,” Walsh said in response to a question from Sen. Susan Collins (R-Maine). “First of all, the money that goes to unemployed workers is taxpayers’ dollars so we need to make sure that every single dollar gets to an unemployed worker.”

In addition to rooting out criminal fraudsters, Walsh said, “We also need to make it easier for workers that are unemployed to access benefits.”

GOP senators such as Mike Braun (Ind.) and Tim Scott (S.C.) raised concerns about workplace policies Democrats support, such as the labor law overhaul bill known as the PRO Act and the proposed elimination of a lower minimum wage for tipped workers. But for the most part, GOP members didn’t interrupt Walsh’s responses and showed satisfaction in his pledge to listen to their arguments and meet with them if confirmed to head DOL.

Republicans Bill Cassidy (La.) and Roger Marshall (Kansas) asked pointed questions on Biden-backed policies that they said would cause job losses—specifically, on the new president’s move to close the Keystone XL Pipeline and his call to more than double the federal minimum wage.

Walsh avoided escalating the back-and-forth on those points, saying construction workers who’ve lost their jobs due to Biden’s Keystone move would transition to new opportunities created by the White House’s proposed recovery package. He was also open to discussing avenues to lift the federal wage floor.

He offered a preview of one major DOL initiative he’d take up as secretary when he responded to a question from Sen. Tina Smith (D-Minn.) about the need to improve workplace conditions at federally contracted job sites.

“I commit to working with you but working with the department, more importantly, to make sure that these contracts are appropriately carried out and that workers’ regulations are followed,” Walsh said. “Again, its taxpayers’ money in these contracts, we need to spend them the best way we can spend them.”

That’s in line with Biden’s campaign promise to revamp the federal procurement process by imposing new mandates on employers that want federal contracts.

Near the hearing’s close, Walsh made a personal reference while discussing safety regulations to protect workers “on the front end.” By the time his father died, he had only 25% lung capacity remaining from working on job sites, inhaling soot and other contaminants, Walsh said.

(Updated with date of committee vote.)