U.S. Labor Secretary nominee Marty Walsh speaks at a press conference in Boston on March 13, 2020, announcing the postponement of the Boston Marathon due to Covid-19 pandemic.
Photographer: Scott Eisen/Getty Images

Marty Walsh’s unlikely journey to U.S. labor secretary nominee is grounded in unions and construction work, but his political rise intersected with a range of employment issues facing vulnerable workers hit hard by the pandemic—factors that will figure prominently at his confirmation hearing Thursday.

The two-term Boston mayor will seek to demonstrate to the Senate labor committee that he’s capable of directing the U.S. Labor Department to support President ‘s goal of tackling the coronavirus-induced workforce crisis.

As he makes his case, Democratic lawmakers will be highlighting his record of fighting for marginalized workers and communities, said a Democratic aide on the Senate Health, Education, Labor, and Pensions Committee. Spotlighting his efforts to help female workers of color and others who’ve suffered disproportionately amid the pandemic could serve to distance Walsh from his deep ties to the building trades—a predominantly White, male, and politically moderate wing of organized labor.

It’s no coincidence that Walsh will be introduced by Sen. (D-Mass.), a home-state ally and progressive champion.

Republicans on the committee are sure to ask pointed questions, but they haven’t coordinated plans to launch a partisan attack designed to sink Walsh’s nomination, said a GOP aide for the panel. The opposing party sees Walsh as a reasonable candidate to head the U.S. Labor Department due to his reputation as a pragmatic dealmaker who’s won support among Boston’s business community.

While they’ll disagree with his policy preferences, some Republicans on the panel are “probably breathing a sigh of relief” that Biden chose Walsh and not a progressive stalwart to be his labor secretary, the aide added. Both aides were granted anonymity to share private conversations.

Some Republicans likely will probe Walsh on his coziness with unions and a federal prosecution of two of his former aides who were convicted by a jury of extortion but later had the charges thrown out by a judge.

Still, the hearing is shaping up as a chance for Democrats to seize on their slim edge in the Senate by framing Walsh as a fighter for all types of workers, and to preview the worker safety and wage protections he’d push, if confirmed. 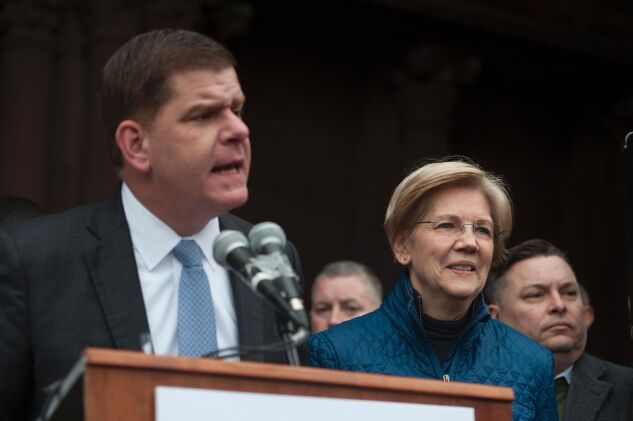 Marty Walsh delivers a speech in Boston in January 2017, with U.S. Sen. Elizabeth Warren (D-Mass.) at his side. Warren will introduce Walsh at his nomination hearing for U.S. labor secretary.
Photographer: Ryan McBride/AFP via Getty Images)

Protecting and expanding worker rights was a major focus of Walsh’s 24 years in Massachusetts politics, an agenda “informed by Marty actually taking the time to talk with and listen to unions and workers directly,” said Darlene Lombos, executive secretary-treasurer of the Greater Boston Labor Council. “This is one of his greatest skills, so we have no doubt he will operate in this same way at DOL.”

Lombos, who leads the Boston region’s AFL-CIO affiliate, cited Walsh’s embrace of a $15 minimum wage, safeguarding construction workers from on-the-job infection, and establishing a program to boost apprenticeship participation among women and people of color.

The Democratic mayor’s commitment to union organizing rights, stemming from his time as head of the Boston building trades union federation, will also be ripe for questions from both sides of the aisle.

HELP Committee Chair Sen. Patty Murray (D-Wash.) Thursday will reintroduce the PRO Act, a long-shot bill to overhaul labor law that would penalize employers who retaliate against unionizing drives and make it tougher to classify workers as independent contractors, among other union-backed provisions, the Democratic panel aide said.

If confirmed to head the Labor Department, Walsh wouldn’t have direct jurisdiction over that legislation, but unions and Democrats are hoping Walsh—a personal friend of Biden—can exert influence over the president’s Cabinet to make its passage a priority. Committee Democrats are planning to discuss the bill at the hearing and to seek Walsh’s help to promote it, the aide said.

Yet the potential for Republicans to weaponize Walsh’s origins in organized labor and endorsements from influential union leaders could serve as an impetus for him to showcase his history of advancing policies with appeal beyond the labor movement, such as on domestic- and immigrant-worker rights and paid parental leave.

“I think a question he needs to be able to answer is how someone with a union background is going to be a secretary of labor for all workers in the United States,” said Jonathan Wolfson, who ran DOL’s policy office under former President . “More than 90% of workers in the private sector are nonunionized. Other than providing unionization, what are his plans for workers who might not want to be members of a union?”

Biden has tasked the DOL with several urgent virus-response priorities. That includes writing a new emergency regulation to protect workers from on-the-job coronavirus infection, issuing guidance to clarify workers can remain on jobless benefits after declining a work offer they feel is unsafe, and guaranteeing that federal-contractor employees earn a $15 minimum wage and paid leave. 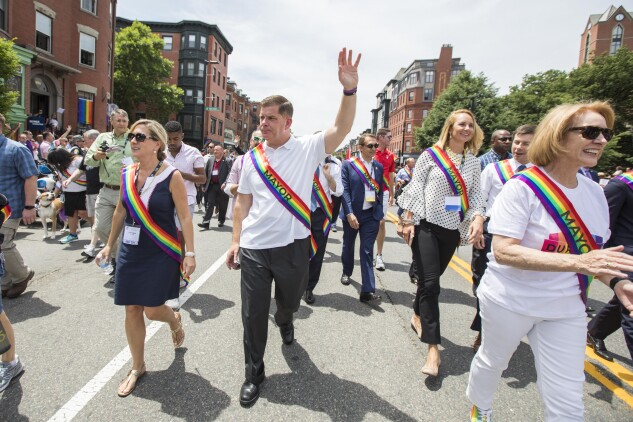 But to ensure smooth confirmation, Walsh likely will refrain from delving into technical specifics about how he’d implement those initiatives.

“Are they going to get into the nitty-gritty of certain policies? I’m not sure,” said James Plunkett, a senior government relations counsel with the management-side law firm Ogletree Deakins. “I think Republicans will have general questions about the role of regulations in the workplace, especially since the economy is on shaky grounds.”

When Murray adjourns the hearing, there will still be outstanding questions about exactly how Walsh would operate as labor secretary, including which Trump regulations he’d roll back.

With Vice President holding the tie-breaking vote in the divided Senate, Walsh has a promising path to confirmation, barring any unexpected revelations.

And even though he’ll push to show his appeal goes far beyond the building trades, Walsh is also certain to leverage his blue-collar roots to ease his chances of swift Senate approval.

“To be candid, I think that his affiliation with the building trades serves him well in the confirmation process because those nominees do tend to fare a little bit better than other labor-affiliated nominees,” said Celine McNicholas, director of government affairs at the left-leaning Economic Policy Institute. “It’s an area where Republicans are not automatically a ‘no.’”