The Labor Department is starting 2019 without confirmed officials in several key leadership posts, vacancies the business community fears could derail some policy initiatives.

The department doesn’t have confirmed leaders for seven sub-agencies after the Jan. 4 departure of Bryan Jarrett, who was serving as acting administrator for the Wage and Hour Division. The openings come as the DOL has yet to tackle some big policy questions, including on overtime pay and “joint employer” liability.

“The simple fact is anytime you have fewer people, it’s harder to get the work done,” a labor and employment attorney for Seyfarth Shaw, told Bloomberg Law. Passantino was the department’s acting wage and hour administrator under President .

Several government agencies have waited more than a year for their leaders to be confirmed by the Senate, which wrapped up the 115th Congress without advancing a slew of President labor picks. Trump will have to renominate them or make new selections and restart the confirmation process. More than 150 nominees were awaiting Senate confirmation as of Jan. 2, including federal judges.

Concern about the lack of confirmed DOL leadership is compounding the long-festering feeling of frustration from the business community and agency heads within the department. They’re still waiting for the department to update a wide range of policies, with a large share of the regulatory work standing to come out of the Wage and Hour Division.

“There’s definitely some feeling in the business community that they’d like to see these regulations more quickly,” Glenn Spencer, senior vice president at the U.S. Chamber of Commerce, told Bloomberg Law. 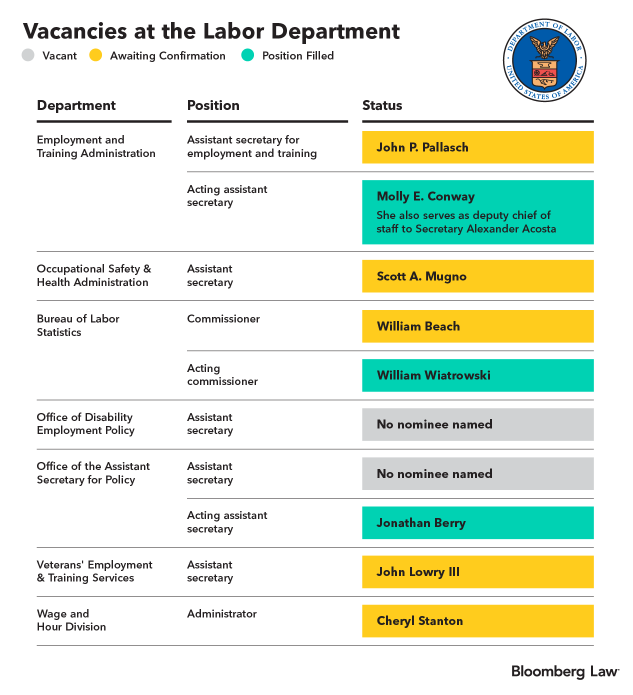 Labor Secretary supposed desire to avoid controversial policies and political turmoil has been blamed for friction with one policy staffer in the White House. Now Acosta’s cautious approach may also be causing problems within the department.

Jarrett, a former business lawyer who left to take a private sector job in California, was also awaiting confirmation as DOL’s assistant secretary for policy.

The WHD achieved two records under Jarrett’s leadership in Fiscal Year 2018, recovering more than $300 million in wages for workers and hosting more than 3,600 compliance events for employers.

But other personnel have been frustrated with the pace at which the department has been working to make labor policy more business friendly, sources familiar with the situation tell Bloomberg Law.

Katherine McGuire, the DOL’s assistant secretary for congressional and inter-governmental affairs, is the next political appointee heading toward the door, according to sources familiar with the situation.

A DOL spokeswoman referenced Acosta’s comments lauding Jarrett’s records in enforcement and compliance in response to Bloomberg Law’s request for comment on the reasons for Jarrett’s departure.

Jarrett’s departure has something of a domino effect. Acting Assistant Secretary Jonathan Berry is running the department’s policy shop until Trump nominates a news pick in place of Jarrett. Patricia Davidson, a career staffer, is now serving as the deputy administrator for the WHD.

“I can certainly say there was nothing like this during our time,” Sharon Block, a former DOL policy office head under President told Bloomberg Law. “These are not easy jobs. People learn how to do them and do them well. There’s huge value in having them stay. I can’t imagine doing the kind of work we did with the kind of vacancies they have.”

The department still has career staff who are relied on heavily, she said. The WHD operated without a Senate-confirmed leader for the first five years of the Obama administration and under acting leadership for stretches of the George W. Bush era.

“I don’t think the framers of the Constitution or Congress had intended for agencies to be run without confirmed leaders,” he said. “Is this the new normal? Then it indicates a huge change.”

“You can’t move someone from one place to another if you’re already thin in the first place,” Nayak, who served in various DOL roles in the Obama administration, said. “It’s like a leaky sink—you haven’t finished patching it up, and now the original patches are falling off.”

Going without political appointees makes it harder to direct the administration’s policy, especially for an administration that wants to roll back many of the initiatives put in place before Trump was elected, he added.

“Appointees can and should work closely with career folks for input and execution, but it’s not fair to leave the career leaders to shoulder the policy direction alone, especially if they’re asking their teams to undo policy they’ve worked on before,” Nayak said.

Sonderling Likely Up Next

While Jarrett’s departure leaves the business community without a friend in a top WHD position, a remaining political appointee would be a welcomed replacement.

Keith Sonderling, currently a senior policy adviser for WHD, is the most likely candidate to fill in as acting administrator, sources said.

“Keith would be a good choice,” Spencer said. “He is also very smart in these issues and thoughtful in his approach. We’d be happy with that. We’d even be happier to see a confirmed Wage and Hour leader.”