The U.S. Justice Department is pursuing allegations that companies and executives moved to fix wages or limit worker mobility as criminal rather than civil matters, an emerging strategy poised to test the legal bounds of antitrust enforcement in labor markets.

The previously untested approach is gaining traction now that a Texas federal court, in November, denied an attempt to halt an indictment against an executive and a director of a physical therapy staffing-agency who are accused of colluding with competitors to suppress wages. It marked the first time a criminal case of its kind was allowed to move forward.

A few weeks later, the Justice Department indicted a former executive at aircraft-engine maker for agreeing to not hire competitors’ employees, adding to the string of labor cases brought since late 2020 in at least five courts.

The increasing use of criminal charges puts executives in industries such as health care, engineering and technology at risk of jail time, and marks a new era in a Justice Department effort that began under President Barack Obama and continued through the Trump administration into President Joe Biden’s.

Department officials told Bloomberg Law that the agency expects multiple indictments for alleged criminal conspiracies in labor markets in the coming year and beyond, stemming from investigations across a variety of industries.

“Where the facts give rise to a chargeable case, we’re going to bring those cases,” Richard Powers, deputy assistant attorney general for criminal enforcement, said in a statement. “Rooting out employer collusion in labor markets will continue to be a priority.”

The criminal focus follows years of civil charges in private and government lawsuits, including a Justice Department case accusing technology giants including and ’s Google of agreeing not to solicit one another’s employees. It’s backed up by 2016 guidance from DOJ and the Federal Trade Commission that certain wage-fixing and no-poach agreements will be treated as criminal offenses under antitrust statutes.

The U.S. Chamber of Commerce and other business groups have pushed back, arguing in at least two federal courts that bringing criminal charges is an unprecedented and unlawful attempt to penalize businesses.

“DOJ is going to try to send people to jail for this; it’s a pretty big deal,” said Ben Sirota, an attorney with Kobre & Kim in New York who focuses on global competition. 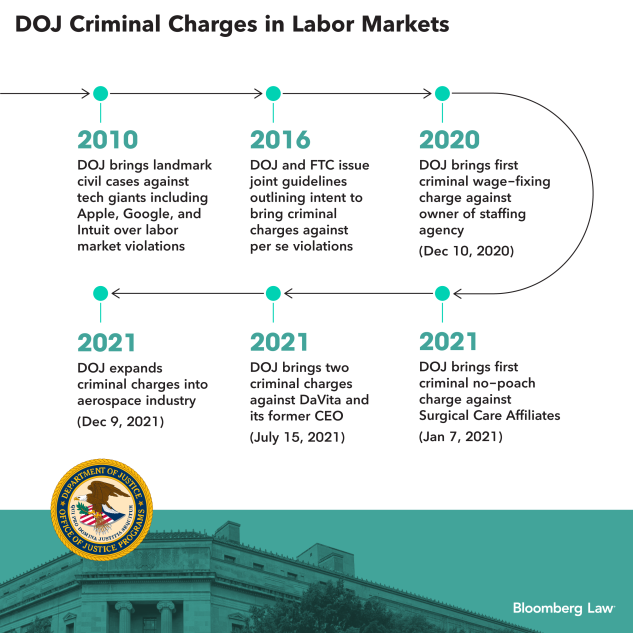 The Justice Department says efforts to fix wages or limit worker mobility violate the Sherman Act, the law famously used to break up the Standard Oil monopoly. The law is most commonly applied to activity that affects consumer goods, and the recent DOJ charges are noteworthy for equating wage fixing and non-compete agreements with price-fixing and market allocation, where competitors agree to divide geographic areas, products or customers.

“There has been plenty of evidence available to indict individuals, including big names like Steve Jobs,” Marshall Steinbaum, University of Utah assistant economics professor, said referring to the late founder of Apple.

“Going after the no-poach agreements in Silicon Valley didn’t go after criminal penalties,” added Steinbaum, who researches labor markets and their application to antitrust law. “They got a slap on the wrist.”

The DOJ cases ended with consent judgments against the tech companies in 2011. An ensuing class action brought by former tech-company employees resulted in a $415 million settlement in 2015 involving Google, Apple, Adobe and

“To get the attention of C-suite and corporate boards, antitrust law has to sometimes say this is not something where you can take a $50 million fine,” said Paul D. Swanson, a Denver-based partner at Holland and Hart who focuses on antitrust. “Once you have individuals who are facing criminal charges, you cease to be able to account for the loss and companies are going to try to ensure compliance to be safe.”

The Justice Department has also weighed in on how federal courts should evaluate private labor-market cases—a first for the agency that occurred twice under the Trump administration.

Agreements between franchisors and franchisees, for example, should be carefully reviewed for possible pro-competitive justifications, like reducing prices for customers.

By reinforcing that distinction to courts, the DOJ could pave a narrow—and potentially successful—path for courts to take when reviewing criminal charges in more clear-cut and blatant instances of conspiracies against workers.

“Historically, the DOJ has stayed out of private cases, but I think they feel so strongly about this new space where they’re building a narrative about why this is bad conduct and where the line is,” said Lisa Phelan, co-chair of Morrison & Foerster’s global antitrust practice.

“The goal is to help the case law develop in the way the DOJ thinks it should in terms of helping judges see the market and potential harm in the way the DOJ sees it,” added Phelan, who led the national criminal-enforcement section in the agency’s antitrust division for 16 years until 2018.

One hurdle to bringing criminal charges before may have been due process—meaning that individuals and companies need to be aware their conduct could result in jail time, Phelan said. Because the department hadn’t pursued labor cases criminally, there was a risk that defendants could get them dismissed on due process grounds.

That’s what Neeraj Jindal and John Rodgers—the first criminal defendants in a wage-fixing case— argued before the Texas federal court. The court, while noting the novel nature of the case, ruled that “the lack of criminal judicial decisions only indicates Defendants’ unlucky status as the first two individuals that the Government has prosecuted for this type of conduct.”

The 2016 guidance further boosts that argument by asserting the antitrust enforcers’ view on criminal activity.

The Chamber of Commerce, however, argued that the 2016 guidance is insufficient to provide notice to companies.

This type of conduct hadn’t previously “been clearly marked as unlawful by either a statute or judicial decision,” said Aaron Streett, an attorney with Baker Botts who drafted an amicus brief on due process for the Chamber.

“Criminal prosecutions, especially against individuals, have a major chilling effect,” Streett added, noting he wasn’t speaking on behalf of the Chamber. “That is a good thing when the charged conduct is plainly unlawful and the defendants have knowingly violated the law. But it is very troubling when the conduct has not previously been treated as per se unlawful by courts and the government begins criminal prosecutions without notice or warning other than informal and nonbinding guidance from DOJ.”

Business-interest groups could be keen to get the issue to appellate courts or the Supreme Court, several lawyers told Bloomberg Law.

“The Supreme Court has generally been quite skeptical in recent years of novel and expansive federal criminal prosecutions, reversing many convictions because the United States exceeded the scope of the statute or violated due process or anti-vagueness principles,” Streett said in an email.

“Companies and individuals should not be held in limbo for years without knowing whether the conduct they’ve been charged with is even prohibited by the law,” he added.

An alleged no-poach scheme between Surgical Care Affiliates and which both run outpatient medical clinics around the country, was targeted in separate indictments against the company and executives in 2021 in Texas and Colorado, respectively. The company executives were accused of agreeing not to hire each other’s senior executives.

A jury trial is scheduled in the DaVita case this March . The Chamber, including a Colorado affiliate, and the National Association of Criminal Defense Lawyers urged the court to dismiss the case.

In March 2021, a Las Vegas executive was indicted for fixing wages with competitors for nurses who worked for a staffing company then known as Advantage On Call LLC.

The latest indictment, against the former Pratt & Whitney executive, alleges among other things that aerospace companies threatened to take away access to projects from parts suppliers that didn’t comply with the agreement. The indictment brought a wave of private class actions against the companies involved.

Antitrust lawyers say they are watching to see if the DOJ pursues household-name, international companies—a move that would gain the attention of the broader business community.

“It will be interesting to see if the next phase of this trend nets a bigger conspiracy,” Sirota said.