Rideshare companies for children are rapidly expanding to serve K-12 schools, worrying labor union representatives who fear the tech-savvy, quicker, and often cheaper modes of transportation may arrive at the expense of bus drivers and kids.

Busy parents have long struggled with shuttling their kids back-and-forth between school, sports, and other activities. So a handful of tech entrepreneur moms created apps for that.

Zum Services Inc., HopSkipDrive, and Kango, along with similar now-defunct services, were launched over the past decade to fill a void that couldn’t be met by app-based rideshare giants and With the touch of a screen, transportation help from experienced, vetted caregivers would arrive to help parents stretched between their work and their kids.

Ritu Narayan launched Zum in 2015 with her two brothers. A mother and former manager at , she created the app for parents like her who didn’t want to sacrifice their careers to care for their kids—as her own schoolteacher mother had done years earlier.

The founders of HopSkipDrive and Kango created their startups with similar motivations.

Joanna McFarland of HopSkipDrive struggled to juggle a full-time job and take her children to school before she created the app six years ago alongside two other mothers. Sara Schaer’s commute through San Francisco’s traffic-clogged streets sparked the idea behind Kango, which arranges for sitters as well as drivers throughout California and Arizona.

Now thousands of K-12 schools and local government agencies nationally are paying these rideshare companies to take students to school and back. One of them, Zum, has contracted to expand its services to traditional students for two of California’s largest school districts.

“Our vision from day one was to create the largest and the safest platform for children’s mobility,” said Zum Chief Operating Officer Vivek Garg. Founded as an “Uber for kids,” as he put it, the company is now focused on bringing its services to the masses.

More than one-third of Oakland, Calif., Unified School District school buses ran late before the district started using Zum, district transportation director Kimberly Raney said. Zum took over some of its transit services in 2018, and last year secured a $53 million, five-year contract for all of the district’s home to school transportation.

Since the city’s schools reopened from the pandemic, nearly all of its buses arrive on time, Raney said.

“They promise shorter ride times, less kids on the vehicle,” said Stacy Murphy of Teamsters Local 853, which represents the Oakland Unified drivers. “It’s stuff that would take jobs away from our bus drivers, that’s the way I look at it.”

Oakland’s drivers are employed by Durham School Services, a subcontractor which maintains the labor conditions that existed under First Student Inc., the company that preceded Zum’s arrival, Murphy said. 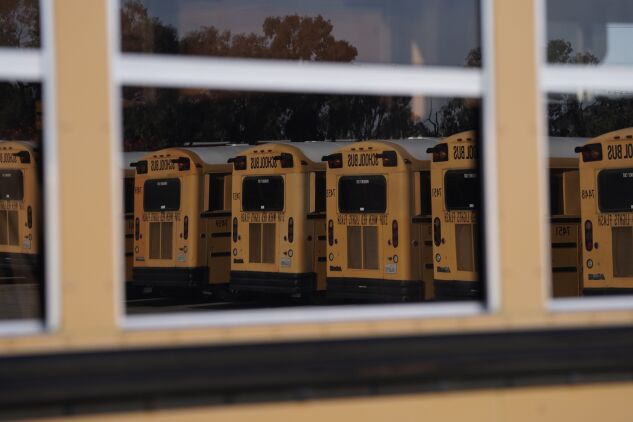 That won’t be the case for Zum’s next big takeover. On Aug. 1, the company will assume all bus transportation operations for the San Francisco Unified School District, a five-year, $150 million contract allowing for a mix of vehicles from small sedans to more than 200 leased yellow school buses to bring children back to school this fall. The drivers will be employees, not independent contractors, working directly for Zum.

Under his company’s model, buses, sedans, and SUVs all use the same technology platform, Garg said. Dispatchers are ditching walkie-talkies for smartphones and tablets. A vehicle can be rerouted to a different address in an instant. Telematics, the real-time communication of driver speed, ensures that risky drivers are identified before there’s an accident. Diesel-burning buses will be swapped for cleaner-running electric vehicles.

Zum is in the final stages of negotiations with SMART Local 1741, the union advocating for San Francisco’s school bus drivers and fleet maintenance workers who previously worked for First Student, one of the biggest bus transportation providers in North America.

San Francisco’s bus drivers have been critical of the district’s hiring of a rideshare company to handle student transit. At an Oct. 29, 2019 school board meeting, drivers implored the district to reconsider their choice to rely on the rideshare companies whose drivers aren’t required to meet the same strict safety and vehicle standards as the trained union drivers.

“Our members have seen drivers for these other companies leave children in a car and get out of it and have them cross the road by themselves, and these are things that we would lose our jobs over,” Local president Meghann Adams said recently. “There’s a lot of expectations that are put on us, that are to ensure that children are safe and we think that that same thing should be applied to other workers who are transporting children.”

Adams acknowledged that the drivers employed by Zum will be required to comply with safety regulations. But she is concerned that the proliferation of rideshare companies in school transportation could lead to an erosion of safeguards for workers and children.

“We’re definitely at ease as far as our own jobs go, but that’s doesn’t mean the fight is necessarily over,” she said.

Zum has focused on assuaging the union’s concerns since it won the contract, Garg said.

Unions “have been there for years and have been there for a reason,” he said. But the rideshare model that relies on independent contractors works well for deploying vehicles precisely when and where needed, he added, and satisfied a need for schools that was unfulfilled under the status quo.

From their homespun origins, Zum now has operations in five states, serving more than 4,000 schools. HopSkipDrive operates in eight states and the District of Columbia, and will soon begin serving the Milwaukee area, serving more than 250 schools and districts in total. About 60% of Kango’s operations are with schools, growing by 12 times over the last year, a Kango spokesperson said, though she declined to furnish specific figures.

The companies maintain their drivers are far different than those for general population ride-hailing apps: they are overwhelmingly women; their background checks are more extensive; they’re better paid; and the demand for their services is limited to the few hours before and after school.

“I think it’s safe to say that we do every bit [as much] of screening that you would do as a family,” said Kango’s Schaer.

But their arrival on the kiddie transit scene didn’t come without growing pains.

Drivers have filed at least three lawsuits against HopSkipDrive in California state courts, claiming the company misclassified them as independent contractors and failed to pay them their minimum hourly wages, overtime wages, expense reimbursements, and other benefits to which they are entitled as employees under state law. The drivers ultimately settled with the company for a total of $425,000 in two of the lawsuits. The third case, filed in February, is being resolved through arbitration.

Zum has been hauled into California court too, for allegedly misclassifying drivers as independent contractors.

Designating drivers who use their own vehicles as private contractors undercuts a part of the companies’ safety claims, said Veena Dubal, a labor law professor at the University of California Hastings College of the Law.

“Companies are going to be in a position where they cannot provide safety protocols for the workers because they can’t appear to be controlling the workers in any way,” Dubal said.

California rideshare services scored a victory last year when voters backed Proposition 22, a measure permanently exempting drivers from the employee classification while providing health-care subsidies, discrimination protection, and a minimum wage. But courts haven’t yet ruled on whether the new law is retroactive, meaning it would apply to any violations that occurred before it became law.

HopSkipDrive, Zum, and Kango, are covered by Proposition 22 too. The new law provides legal certainty to HopSkipDrive that future misclassification lawsuits won’t come, its CEO, McFarland, said, and it’s also compelled the company to provide accident insurance to all drivers.

Cash-strapped school districts have long struggled with declining numbers of bus drivers and rising costs. A 2015 federal law added pressure: the Every Student Succeeds Act (P.L. 114-95) set a new mandate that districts provide transportation for hundreds of thousands of youths in foster care, in addition to homeless and special-needs students, to their school of origin even if the students move out of the district. In some instances, the services are extended to pregnant minors, minors with children, or other students who face barriers in getting to school.

It’s these vulnerable students that are best served by services like HopSkipDrive, said McFarland. The company has no plans to serve traditional students. “I think we are a great complement to the yellow school bus, and that’s how we see ourselves,” she said.

But the potential for liability claims is a turn-off for some transportation directors. “It’s a great concept, don’t get me wrong, it’s an awesome concept,” said Tim Shannon, who oversees transportation for the Twin Rivers Unified School District in the Sacramento, Calif., region. “I just think it’s going to be the last resort for most school districts.”

To contact the editors responsible for this story: at csaenz@bloombergindustry.com; at aharris@bloomberglaw.com