More than 30,000 workers on the brink of a strike are motivated by a grievance that’s factored into much of the recent labor unrest nationwide—a proposed two-tier wage system that would pay starting workers less than their more experienced colleagues.

Kaiser’s plan would slash pay between 26% and 39% for new workers, union leaders say, making it all but impossible for the company to fill a void of personnel at its hospitals and clinics. Striking workers at John Deere similarly rejected a proposed contract that would have widened an existing two-tier system, and 1,400 Kellogg’s workers who also walked off the job want to eliminate a bifurcated structure for pay and benefits.

Kaiser’s proposal—which the company says will help contain costs for consumers—was a principal factor that pushed many of its West Coast workers to authorize a strike last week, with 96% support, according to the Alliance of Health Care Unions, an umbrella group for unions representing Kaiser workers. Tensions had been building for years, workers say, and a staffing shortage increased during the pandemic.

A member union of the alliance, the United Nurses Associations of California/Union of Health Care Professionals, announced Oct. 18 that another 1,500 Kaiser workers in northern California and Hawaii will vote later this month on whether to authorize a strike, the latest in a historic wave of labor battles across multiple industries.

“It comes to that breaking point where you don’t have anything else,” said Nikki Avey, a registered nurse for Kaiser in San Diego and an officer for the member union. “The proposals that Kaiser was bringing forth were just really disappointing. And I think the members were fired up; they were just tired of it.”

In a statement to Bloomberg Law, Arlene Peasnall, Kaiser’s senior vice president of human resources, said employees already earn 26% more than average market wages, and that the two-tiered proposal would address future costs and “ensure we continue to be affordable for our members.” Management has continued to meet with the union since the contract expired last month, she said, an has put forth an initial offer with wage increases and no benefit cuts.

“The challenge we face is that this is unsustainable,” Peasnall said. “If we continue to increase costs so high above the marketplace, we will become unaffordable and lose members. And the fact is: Health care is increasingly unaffordable, and escalating wages are half of the cost of health care.” 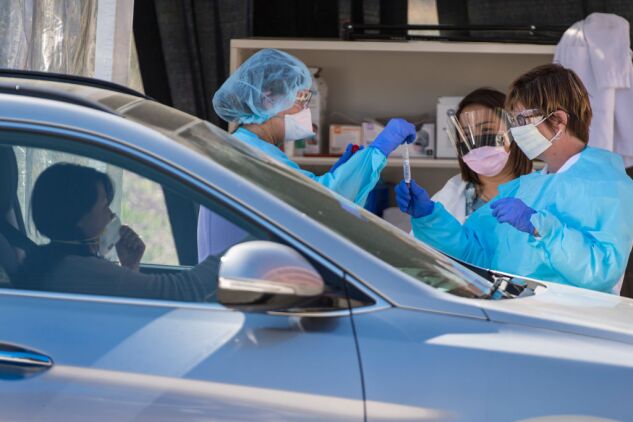 The two-tier proposal would apply to workers hired in 2023 and beyond, she said, and “will allow our new employees to be paid above market wages on average, enabling us to continue attracting and retaining top talent.”

While tiered wage systems have existed for decades, they’re usually reserved for recessions, when employers need to make deep cuts to stay solvent. For example, the United Auto Workers and agreed to a two-tier system in 2007 that allowed newer employees to be paid at half the rate of more seasoned workers. The UAW got the two-tier system scrapped after a six-week strike in 2019.

But the coronavirus pandemic has shifted leverage toward workers as employers struggle to find to labor in industries across the economy. And with corporate share prices rising and large bonuses being doled out to executives, unions are standing firm against proposals to create lower wage tiers.

has already reported record profits of $4.7 billion this year. CEO John May was awarded $15.6 million in 2020—including nearly $7 million from stock awards—compared to $6 million in 2019.

Kaiser’s annual operating revenue reached $88.7 billion in 2020, compared to $47.9 billion in 2011, according to its annual report. Union leaders say the health system earned $6 million a day in profit during the pandemic and has $44.5 billion in reserves but has offered a 1% increase each year through 2023, which in many areas won’t keep up with inflation.

The health-care unions continue to bargain with Kaiser management but little progress has been made, said Jane Carter, director of research, public policy, and regulatory affairs for United Nurses Associations of California/Union of Health Care ProfessionalsUNAC/UHCP.

“There’s been little to no movement,” Carter said Wednesday.

Workers could be given the signal to strike at any moment if union negotiators feel they’ve reached an impasse. Health-care unions typically have to give employers a 10-day notice to make accommodations for patients.

“They’re taking health-care workers, the most popular workers in the country that face losses and trauma, and telling them they should take wages—a cut in real wages—and that they should create a two-tiered system,” said Shane Burley, a communications organizer for the Kaiser union in Oregon. “I’m not sure exactly what’s happening in corporate boardrooms where they think this was going to fly, but it’s not.”

(Updated in paragraphs 14, 15 to add comment from union official on status of talks. An earlier version misidentified an umbrella group of unions representing Kaiser workers; it is the Alliance of Health Care Unions.)