The NLRB is taking another look at union election rules.
National Labor Relations Board

A legal test that business groups and Republican lawmakers said would hamper job growth, hurt small businesses, and wreck the franchising model has only been applied in handful of cases, a Bloomberg Law analysis of decisions in the three years since reveals.

Using the standard introduced in Browning-Ferris Industries—whether the employer has even indirect control over another’s workers—potentially makes it easier to hold big companies accountable for labor law violations by staffing firms, subcontractors, and other associated businesses that provide outsourced labor. The old test required employers to have direct control to be liable for another’s workers.

Companies like Subway Restaurants, and other chains could also be caught up in the rule, as they generally rely on franchisees to employ workers who conduct day-to-day operations at thousands of locations nationwide.

Since 2015, the test has been applied in just 14 cases before NLRB administrative law judges and regional directors. That represents only a tiny fraction of the nearly 1,100 cases those tribunals have decided while Browning-Ferris has been in effect.

The relative scarcity of rulings to decide whether two or more businesses are joint employers under federal labor law raises questions about how earth-shattering the 2015 decision really was, even as the NLRB proceeds with a rare administrative rulemaking to narrow the test following unsuccessful attempts to undo Browning-Ferris.

Legislation has stalled in Congress, the NLRB’s December 2017 ruling that overturned Browning-Ferris had to be withdrawn two months later, and a federal appeals court challenge remains pending. 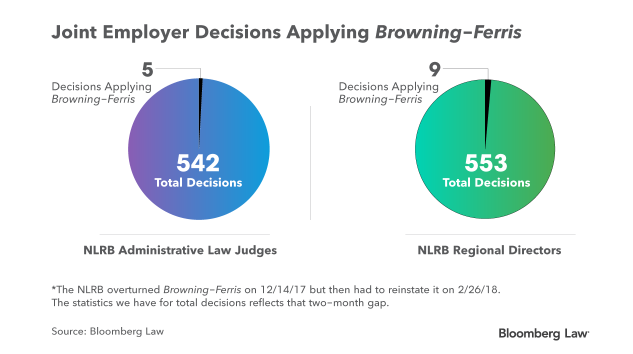 “The number of joint employer decisions indicates that Browning-Ferris is not some kind of radical reordering of the status quo,” William Gould, a Stanford University law professor emeritus and former NLRB chairman during the Clinton administration, told Bloomberg Law. “If that were the case, we would see much more litigation and many more findings of joint employment liability.”

Rulings that apply the Browning-Ferris test only arise when parties contest whether a company is a joint employer, so the low number of decisions shows that firms have adjusted to the “fairly minor changes to the law,” Craig Becker, the AFL-CIO’s general counsel and former NLRB member, told Bloomberg Law.

Critics said “it would destroy small business or franchising,” Michael Harper, a labor law professor at Boston University, told Bloomberg Law. “They have no basis to say that,” Harper said.

Employers: It’s Not Just the Rulings

But management attorneys say Browning-Ferris has had a major impact on businesses in ways that aren’t reflected by the number of decisions that applied the test.

The decision’s vague criteria for what constitutes a joint employment relationship have been a “major stumbling block” for businesses planning any projects or engagements where their workforces will interact, a partner at Morgan, Lewis & Bockius and former NLRB member who co-wrote the dissent in Browning-Ferris, told Bloomberg Law.

“It really did cause a large disruption, even if it wasn’t litigated as much as you’d expect,” Michael Mortensen, an attorney with Jackson Lewis, told Bloomberg Law.

In addition, few joint employment cases are litigated all the way to a decision, which also makes the overall number of decisions a poor measure of Browning-Ferris’ significance, Michael Lotito, a partner with Littler Mendelson, told Bloomberg Law.

Franchising, contracting and other business-to-business arrangements can insulate companies from the costs and complications of directly employing workers. But a ruling that says a company is a joint employer means it can be on the hook for labor law violations and union bargaining obligations related to contract labor.

The growing use of those arrangements in the modern economy in part drove the labor board to revisit and revamp its joint employment test, the then-Democratic board majority said in its Browning-Ferris decision.

That ruling expanded the criteria for joint employment from direct and immediate control over terms and conditions of employment to also consider indirect and unexercised control.

NLRB Regional Director Charles Posner handed down the first decision applying that new test in October 2015, ruling in favor of the employer. Posner rejected a Laborers’ International Union of North America affiliate’s argument that a demolition company jointly employed the laborers it obtained from a temporary staffing firm.

Regional directors, who rule on petitions seeking elections to determine whether workers want to be represented by unions, have decided nine cases that applied the Browning-Ferris test for joint employment. Two rulings found workers were jointly employed, five found no joint employment, and two were split, with some of the petitioned-for workers jointly employed. Regional directors have issued 553 decisions over the past three years, according to a Bloomberg Law review.

NLRB administrative law judges, who handle unfair labor practice cases, found a joint employment relationship in all five cases that used the Browning-Ferris test. Those judges have handed down 542 rulings over that time.

The full board affirmed two of those administrative law judge rulings. The board also applied Browning-Ferris to find joint employment in a case in which a regional director didn’t reach that issue.

The NLRB overturned the Browning-Ferris decision in its December ruling in Hy-Brand Industrial Contractors, returning the joint employment test’s focus to just direct and immediate control. But the board then withdrew that ruling in February after the NLRB inspector general said a Republican member, William Emanuel, shouldn’t have participated in the case because his former firm represented the staffing firm in Browning-Ferris.

Most of the joint employment cases decided under the Browning-Ferris standard involved companies that contracted or subcontracted labor from other business. None of the cases involved franchising, which is the industry widely viewed as having the most to lose by a broader test for joint employment. McDonald’s and the International Franchising Association have driven the opposition to Browning-Ferris, Charlotte Garden, a labor law professor at Seattle University, told Bloomberg Law.

The NLRB General Counsel’s Office brought a massive unfair labor practice case in 2014 alleging McDonald’s was jointly liable for firing and retaliating against franchise workers for participating in demonstrations demanding a minimum $15 hourly wage and other job improvements. That case, which was charged under the “direct and immediate” standard prior to Browning-Ferris, is ongoing.

But assuming the administrative law judge ever rules on McDonald’s joint liability, her decision would likely be reviewed by the NLRB under a narrowed standard. The board’s rulemaking proposal would largely turn the joint employment test back to what was in place before Browning-Ferris.

To contact the reporter on this story: in Washington at rIafolla@bloomberglaw.com