The first week of April marks what’s known as “H-1B season” in immigration circles. That’s when employers first can apply for the coveted skilled guestworker visas, and when the 85,000 available for the year usually run out.

Despite their popularity, the visas have drawn ire in recent years following high-profile reports that workers on H-1Bs replaced U.S. workers at companies such as Disney and Southern California Edison. President Donald Trump has been one of the biggest critics, singling out the H-1B program in his 2017 Buy American and Hire American executive order.

Some immigration advocates and employers have fought back, arguing that businesses need skilled foreign workers to keep the economy running.

But others say the key to obtaining that talent—and cutting down on U.S. worker displacement—could be increasing the number and accessibility of employment-based green cards.

There’s been a “concerted effort” to “muddy” the issues, Ron Hira, a professor of public policy at Howard University, told Bloomberg Law March 30. “We should be having a conversation about high-skilled immigration, and not just H-1B,” he said.

The goal of the H-1B program was to shift employers away from temporary foreign labor, Bruce Morrison, a lobbyist for the U.S. engineer organization IEEE-USA, told Bloomberg Law March 28. The Immigration Act of 1990, therefore, bumped up the number of available green cards and capped what had been an unlimited temporary visa program, said Morrison, who wrote the House version of the legislation.

But subsequent legislation to facilitate access to skilled foreign labor focused on the H-1B program, and employers are still using the visas in large numbers. 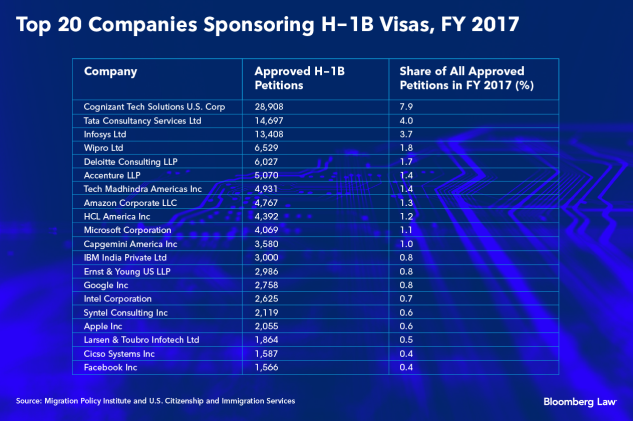 Over the past five years, U.S. Citizenship and Immigration Services has approved an average of 212,000 H-1B petitions a year over and above the 85,000 cap, according to a recent report from the Migration Policy Institute. The petitions are a combination of extensions of previously approved H-1Bs and petitions filed by employers that are exempt from the cap, such as universities and research organizations, the immigration-focused think tank said.

By contrast, only 140,000 total employment-based green cards are available each year, about 110,000 of which are for skilled workers, according to the Congressional Research Service. Only a fraction of those go to the actual workers because their dependents are counted against the cap.

With a chunk of H-1B holders also seeking green cards, there’s now a backlog causing many workers to wait years or decades to become lawful permanent residents. Per-country caps on the green cards have compounded that backlog for Indians, who make up the majority of H-1B visa holders.

“The problem right now is that the H-1B system is being used by two very different users,” Doug Rand, president and co-founder of Seattle immigration services company Boundless Inc., told Bloomberg Law March 28. Some just want access to the best talent, such as Microsoft, Facebook, and plenty of non-tech companies in banking, health care, manufacturing, and other industries, he said. Then there are those that really just want temporary workers, such as Tata Consultancy Services and Infosys Ltd., he said.

Instead of trying to draw a distinction through the “H-1B dependent” label, “let’s just make it easier for American employers to sponsor people they need for green cards right off the bat,” said Rand, who served as assistant director for entrepreneurship at the White House Office of Science and Technology Policy under the Obama administration. An employer is deemed “H-1B dependent” if a certain percentage of its workforce has an H-1B visa.

A number of employers prefer H-1B workers because “you have much more control” over workers with temporary visas, Hira said. H-1B workers are “indentured in a lot of ways” because leaving their employer risks losing their immigration status, he said.

That distinction also appears reflected in wage levels. In fiscal year 2017, the average salary provided by the top-20 H-1B employers was significantly lower among H-1B dependent employers ($82,788) than those that aren’t ($110,511), according to the MPI. The outlier was Facebook, an H-1B dependent employer that actually offered the highest salary—$144,812. 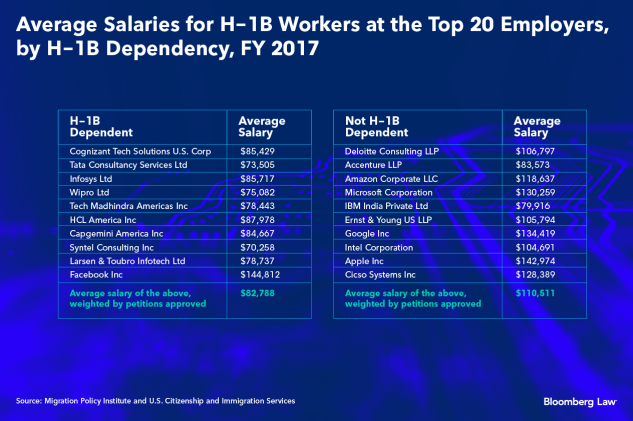 Increasing employment-based green cards is “not a magic fix to all of the problems,” Hira said. Changes still are needed to the H-1B program, including “much higher standards” for “your front-end screening process,” he said.

If employers can continue to hire H-1B workers cheaply, “are you getting really the best and brightest, or are you getting ordinary people?” Hira asked.

The “irony” is that the immigration system is backward: Employers have to jump through fewer hoops to get a temporary worker than to sponsor a worker for a green card, Rand said.

There’s only a “perfunctory labor market test” to sponsor an H-1B worker, whereas the requirements to sponsor someone for a green card are “crazy,” he said.

Even though you’re theoretically testing the labor market, “you know exactly who you want to sponsor,” and “it’s particularly unnecessary” because once the worker gets the green card, he or she can work anywhere just like a U.S. citizen.

“To the extent that the green card process could be made incredibly quick and responsive, that might be a viable solution” to moving employers away from temporary visas and more toward green cards, William Stock of Klasko Immigration Law Partners in Philadelphia told Bloomberg Law March 30.

“Another way to slice the onion” would be to adopt a system similar to that of the U.K.: perform a more rigorous labor market test when employers are seeking H-1B visas, and then ditch the test altogether when those same workers apply for their green cards, according to Stock, the immediate past president of the American Immigration Lawyers Association.

The fees required to sponsor someone for a green card, plus the knowledge that the employee will soon be able to negotiate on a level playing field with any other green card holder or U.S. citizen, are really the best labor market test, Rand said.

For Morrison, the key is to scrap the labor market test in favor of hiking employers’ green card fees. “How do you determine what’s needed? You make employers pay,” he said.

But at least some H-1B dependent companies “have a business model which involves providing a lot of their workforce from abroad,” Stock said. “To the extent you design a system which doesn’t allow them to fill those needs in the U.S. labor market,” they will fill those needs overseas, he said.

To that end, a possible solution might be to “provide them incentives to move people to green cards as fast as possible,” Stock said. For example, H-1Bs could be made exempt from the annual cap if those workers are on a path to permanent residence, he said.

There also could be separate H-1B visas for outsourcing companies that are “highly regulated” and that completely bar U.S. worker displacement, Stock said.

But “we have a successful history of taking people from around the world and making them Americans,” Morrison said. “We are not a nation of people here as guestworkers.”

“If you act like those distinctions don’t mean anything, you’ve done the American people a huge disservice,” he said.

(Story has been updated to add graphical information.)

To contact the reporter on this story: Laura D. Francis in Washington at lfrancis@bloomberglaw.com