Iranian citizen Ali Vayeghan (R) arrives at Los Angeles International Airport on Feb. 2, 2017, after being detained and sent back to Iran when he arrived in the U.S. on the day President Donald Trump's travel ban was implemented. Since then, Iranian applicants even for visas exempted from the ban have largely been denied or not acted upon.
Photographer: Justin Sullivan/Getty Images

President 2017 travel ban from seven countries exempted Iranians seeking student and exchange-visitor visas, but many of those applicants have been blocked as well.

The department is on track to approve only about one-third as many Iranians for student visas this fiscal year as in the year before Trump was elected, State Department data shows. And while the number of exchange visas is about on par with the pace of approval last year, the figure is well below numbers from previous years.

The department is denying about half of applications in both categories, and more commonly than being rejected, “people are entering into this visa limbo” where there’s no decision made and no way to check the status, said Adam Weinstein, a senior law and policy analyst with the National Iranian American Council.

The downward trend in visa approvals was apparent many months before long-simmering tensions peaked this week, with Iran closing off diplomatic talks following an imposition of additional sanctions. The new sanctions were imposed after Trump abruptly canceled planned airstrikes against Iran for shooting down a U.S. drone. The administration also has blamed Iran for recent attacks on oil tankers near the Persian Gulf, something the Iranian government denies.

The drop in J exchange-visitor visas may in time have a significant impact on health-care delivery, as they’re frequently used by medical school graduates from Iran and other countries who want to pursue residencies in the U.S.

There’s been a “very steady stream of Iranian physicians and dentists” up to this point, said Mahsa Khanbabai of Khanbabai Immigration Law in North Easton, Mass. But “we’re going to be seeing some drastic changes when it comes to medical professionals from overseas” because “more and more physicians in particular are interested in moving to other countries, and not to the U.S.” 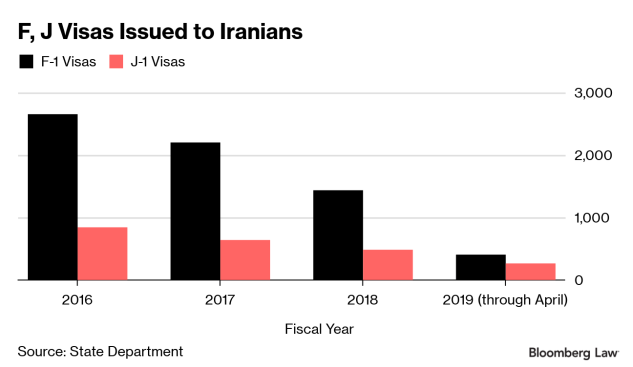 The J and F visas, which typically go to undergraduate and graduate students, are allowed for Iranians under the travel ban subject to “enhanced screening and vetting requirements.” Those requirements are likely what’s driving the decline in visa approvals.

There have been 413 F-1s issued to Iranians so far in fiscal year 2019, which over a full year would translate to less than half the 1,433 issued in fiscal 2018, before the travel ban went into effect, according to State Department data. There were 2,650 approved in fiscal 2016, President last full year in office.

Iranians also saw the biggest drop among nationals from the travel ban countries in J visa sponsorships by the Educational Commission for Foreign Medical Graduates, the sole sponsor of J-1 physicians in clinical training programs in the U.S.

There was a 34.8% dip in the number of residents sponsored between 2017 and 2018, according to ECFMG data. The next biggest drop was 31.6% for Sudanese residents.

Among majority-Muslim countries as a whole, Iran ranks fourth in terms of declining sponsorships behind Kuwait, Bahrain, and Malaysia.

“Student visa application numbers are subject to a wide variety of factors and are seasonal in nature,” a State Department spokeswoman said, adding, “Every visa decision is a national security decision.”

The State Department has no publicly available data on how many visa applications are mired in what it refers to as administrative processing. Its duration varies by individual circumstances, it says.

Weinstein says cases are being frozen for so long that they have the practical effect of a visa denial without the department actually issuing one.

“Time is of the essence” when someone applies for a graduate degree program in the U.S., especially if he or she is relying on scholarship funds that don’t roll over into subsequent academic years, he said. An Iranian graduate student whose visa application is still up in the air at the start of the school year is likely to lose that scholarship money, and potentially the chance to attend school in the U.S. at all, he said.

Iranians have always had a tougher time getting visas than nationals of many other countries, but now it’s “markedly worse,” said Chris Richardson, a former Foreign Service officer who now is general counsel and chief operating officer at BDV Solutions, an immigration consulting company.

Iranians seeking temporary visas are taking the biggest hit from the travel ban out of the other countries mentioned. They went from an average of 1,650 temporary visas per month in FY 2017 to 501 in FY 2018, according to the Migration Policy Institute.

There’s been an “unseen culture change” at the State Department that’s making it difficult to get visas, even if they’re not blocked by the travel ban, said immigration attorney Adam Cohen of Siskind Susser in Memphis, Tenn.

“We don’t see the impact now” of the visa delays, but they’re likely to be felt in the future, Richardson said. “You can see hospitals close” and “longer waits for medical care” as the physician shortage worsens because immigrants—not just from Iran—either can’t come to the U.S. or choose to go elsewhere, he said.

“You’re starting to hear Iranian students look more to Germany, the U.K., Canada as more viable options” for their education, Weinstein said. “The U.S. is the number one destination at this point,” but “they’re essentially being forced to go to their second choices.”