“Generation Z"—those born between 1996 and 2010—are entering the workforce and are more likely to seek financial security and spend a career at a single company. Baker McKenzie employment attorneys take a look at how workplaces will need to change to meet their expectations, including having robust inclusion and diversity programs and private working spaces.

Just as employers adjusted to the entrance of Millennials, those born between 1980 and 1995, into the workforce by offering more work-life balance, building an open workspace, and leveraging social media, a new Generation, “Generation Z,” evolved.

Generation Z have developed a collective outlook and characteristics based on their shared life experience in the early 2000s. Shaped by the ubiquity of technology, universal social media platforms, the “Great Recession,” and the rising costs of education, Generation Z are technologically sophisticated, radically inclusive, and search for financial security. 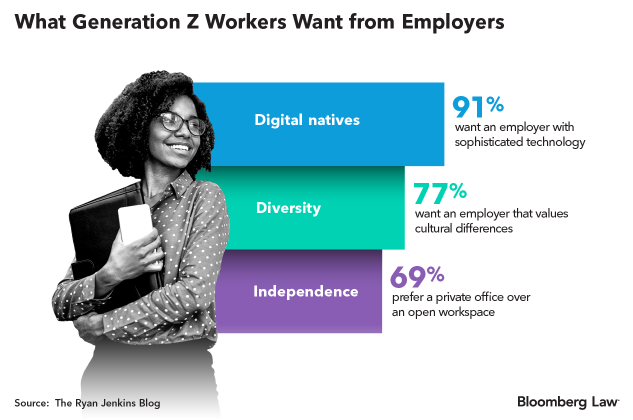 But how do these characteristics impact Generation Z in the workplace?

Generation Z Are True Digital Natives. While Millennials pioneered smartphones, the internet, and social media, Generation Z were raised in this digital world. The first smartphone debuted when Generation Z were infants, and they have not known a life without technology at their fingertips.

Generation Z spend a majority of their lives connected to a computer, smartphone, tablet, television or other electronic device. As the first true digital natives, Generation Z expect most communication to work within the context of their phone screen. In fact, 91% of Generation Z said technological sophistication would impact their interest in working at a company.

Generation Z Want Stable Careers and Will Work for It. Generation Z watched their parents struggle with financial challenges through the housing bubble, Great Recession, and soaring educational debt. As a result, they tend to be pragmatic and prioritize financial security when looking for jobs.

Not only are Generation Z more likely to spend their career at a single employer, but they are also interested in having a flexible career path within an organization as 75% expressed interest in taking on numerous roles within a company.

Like Millennials, Generation Z appreciate work-life balance and flexibility, but that doesn’t mean they aren’t willing to work hard. 77% of Generation Z believe they need to work harder compared to prior generations to have a fulfilling professional life, and 58% are open to working nights and weekends for a better salary, compared to 41% across all working generations.

Generation Z Are More Global and Diverse. Millennials are considered the first “global” generation with the development of the internet, but Generation Z grew up in the World Wide Web and are also the most diverse generation to date. As a result, Generation Z tend to take a more global approach to their thinking and interaction, and expect workplaces that reflect the growing diversity of their peer groups.

As 77% said that a company’s diversity will affect their decision to work there, employers should maintain robust diversity and inclusion initiatives.

Generation Z Are Independent and Self-Learners. 71% of Generation Z believe in the phrase “if you want it done right, then do it yourself.” After seeing the rising costs of higher education, Generation Z are also more wary of educational debt and are willing to consider a more efficient, non-traditional route to education. 75% said they don’t consider college the only path to strong education, and many are choosing to go directly into the workforce.

Even in the workplace, Generation Z tend to be more independent as 69% would rather have a private office space rather than the open, collaborative workspaces popular among Millennials.

Generation Z Want to Make a Difference. Generation Z are extremely plugged into a truly global economy and are hyperaware of the challenges facing the world. With information and a global network readily available at their fingertips, Generation Z are empowered to make informed decisions and a greater impact than prior generations.

They want to make a difference in the world and 93% said that a company’s impact on society affects their decision to work there.

The entrance of Generation Z into the workplace will only further add to the complexity of managing and integrating workers that cross generations of Baby Boomers, Generation X, Millennials, and now Generation Z.

While time will tell how Generation Z will impact the workforce, being aware of these common characteristics will enable employers to prepare for and predict the change that this new generation will bring to the workplace.

Benjamin Ho is an employment partner at Baker McKenzie in San Francisco. He is a trusted advisor to clients on a broad range of cross-border employment matters, including helping them enter into new jurisdictions, managing their existing workforces, and advising on global mergers and acquisitions and corporate reorganizations.

Caroline Pham is an employment associate at Baker McKenzie in San Francisco. She counsels clients on domestic and cross-border employment issues, advises on employment matters in global mergers and acquisitions, and litigates claims of wage/hour issues, wrongful termination, discrimination, harassment, and retaliation.