A century-plus of combined legal expertise is leaving the Labor Department, setting up four key vacancies in an office with unheralded influence on the administration’s workplace agenda.

The DOL’s associate solicitors for employment and training (Jeffrey Nesvet), occupational safety and health (Ann Rosenthal), and administrative law and ethics (Robert Shapiro), along with the New England regional solicitor (Michael Felsen), are either about to retire or recently did so—all after lengthy careers in the senior civil service.

The institutional knowledge vacuum created by the four retirements from the DOL solicitor’s office could put a short-term strain on the agency’s regulatory and policy progress. It may also provide political leaders with a chance to install outside counselors who are more aligned with the Trump philosophy. `

But the deep bench of current DOL attorneys eligible for promotions, the office’s historical duty to provide nonpartisan counsel, and the labor secretary’s past involvement in a politicized hiring controversy at the Justice Department may prevent this administration from turning exclusively to the private sector to fill the vacancies.

The outgoing officials can be replaced with internal or outside candidates, depending on the preference of Labor Secretary Alexander Acosta and his Solicitor Kate O’Scannlain.

Whether the department can reshape the solicitor’s office to its liking looms large for ongoing high-priority White House initiatives to expand apprenticeship, curtail guestworker program abuse, and roll back regulatory strains on businesses.

The quartet of retiring lawyers oversaw one of the largest legal departments in the federal government, with some 600 DOL attorneys crafting rules and guidance in Washington or enforcing and litigating more than 180 laws across the country.

“Those are four people who have been involved in every important decision in their areas for decades. It’s a tremendous loss,” Sharon Block, who was a senior counselor to Obama’s Labor Secretary Thomas Perez, told Bloomberg Law. “All of us who were there as politicals relied so heavily on the career leadership to provide just that straight up advice on what the law is and what the history of these issues has been, without being outcome-determined in how that information was presented.”

‘Federalist Society Resumes Only’? Probably Not

If history is any indication, O’Scannlain, who holds the DOL’s No. 3 overall position, will be presented with a list of several finalists that career civil servant lawyers below her have screened for consideration.

She could direct her subordinates to reject the finalists and reopen the process to consider more external attorneys. This would improve the odds that O’Scannlain selects a lawyer more closely resembling her own background as a big law management attorney. 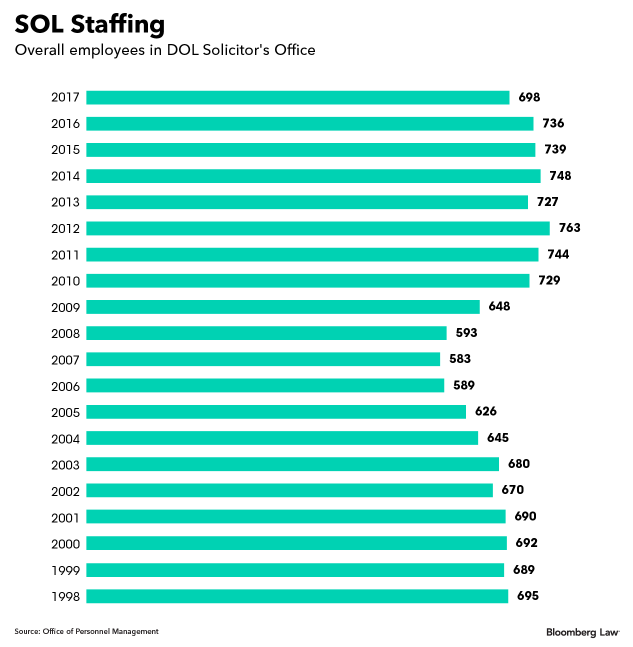 But there are a few reasons why that’s probably not how these hiring decisions will unfold, said Gregory Jacob, a DOL solicitor in the George W. Bush administration.

“I think the reality is that the government compensation is typically significantly lower than what is available to such lawyers in the private sector,” Jacob, now a partner at management firm O’Melveny & Myers in Washington, told Bloomberg Law.

Plus, Acosta might be extra cautious considering he’s only a decade removed from his personal involvement in the DOJ hiring fiasco. A 2008 Office of the Inspector General report concluded that then-Assistant Attorney General Acosta should have intervened to prevent a subordinate from intentionally hiring conservatives in politically neutral jobs.

That experience won’t necessarily preclude the labor secretary from considering some outside candidates, but it’s a process he’d need to navigate with caution.

“There’s a big difference between politicized hiring and making sure you hire someone who is going to do the job the way you believe it should be done,” Jacob added. “He certainly won’t be saying, ‘I want to see Federalist Society resumes only.’”

The DOL, in a prepared statement, did not indicate which direction it’s leaning for finding permanent successors.

“The department is moving quickly to fill these career positions through the standard career hiring process,” a DOL spokesman told Bloomberg Law. “Existing personnel are well-prepared to carry out the department’s mission until the hiring process is complete.”

The associate solicitors in the national office are responsible for offering legal advice to their client agencies on how to write rules and policies that stand the best chance of surviving a legal challenge. To the extent this administration hires DOL attorneys on ideological grounds, that would traditionally happen outside of the solicitor’s office, a former career DOL attorney said.

“The associate solicitors, at that level, they are true professionals,” Christopher Wilkinson, who was the DOL associate solicitor for civil rights and labor management through 2015, told Bloomberg Law. “They’ve worked often with both administrations, Republican and Democratic, and they understand their role as career folks. Any politicization doesn’t come at that level. It always comes at the agency level,” said Wilkinson, a partner with Orrick in Washington.

But that doesn’t mean the labor solicitor can’t hire a lawyer with whom she has a prior relationship. For instance, the Obama administration’s Solicitor Patricia Smith selected Jennifer Brand, the current associate solicitor for fair labor standards, in 2011. Brand and Smith had previously worked together enforcing labor and employment law for the state of New York.

O’Scannlain spent the past decade practicing with Kirkland & Ellis, a management firm that also employed a mid-20s Acosta in the 1990s.

Smith, now a senior counsel for the National Employment Law Project, told Bloomberg Law she’s concerned that a hiring freeze and budget cuts during the George W. Bush administration might make it tough to find seasoned candidates inside the solicitor’s office with enough experience to helm their divisions.

Smith said even though the Obama administration allowed her office to hire more attorneys, they were typically fresh out of law school. The inability to hire lawyers during the Bush years meant an age gap exists between the now-retiring associate solicitors and some of their direct reports.

“We were very concerned about the gap and how we would deal with the gap,” Smith said.

The potential for Acosta and O’Scannlain to turn to the management bar or other nongovernmental sectors to fill these jobs may hinge on the quality of the internal applicants, rather than their political preferences.

“We always would look for the best-qualified person to handle the job,” Jonathan Snare, who was a deputy labor solicitor from 2006 to 2007, told Bloomberg Law.

“Sometimes in a regional solicitor’s office, you have a highly-qualified deputy who is very experienced,” said Snare, who now represents businesses with Morgan Lewis in Washington. “But there are some regional offices where there is no deputy or the deputy retires, so where do you go to fill it?”

To contact the reporter on this story: Ben Penn in Washington at bpenn@bloomberglaw.com