Ozzie Albies of the Atlanta Braves hits during Game 6 of the World Series against the Houston Astros on Nov. 2. The Braves won the title, but now Major League Baseball is mired in a lockout.
Photographer: Carmen Mandato/Getty Images

The labor dispute threatening Major League Baseball’s season next year comes down to the same issue that’s roiled manufacturing unions in recent years: a pay structure where young workers may never make as much as those with more tenure.

The players’ union, the MLB Players Association, wants relief from a requirement that younger players serve in the major leagues for six years before they’re eligible for big-money contracts in free agency. The league maintains that doing away with that waiting period would make it impossible for teams to afford their rosters—one of the core areas of disagreement as the sides failed to reach a new collective bargaining agreement, prompting management to call a lockout on Thursday.

Under the agreement that expired last week, players promoted from the minor leagues are stuck with their starting salary during their prime years even if they perform among the league’s best players, allowing owners to short-change athletes, sports labor lawyers say. As players age and performance tends to decline, it is much harder to land a lucrative free-agent deal, making the six-year waiting period costly for the player.

While the system is unique to baseball, it’s not unlike the two-tier wage structures in manufacturing—a major sticking point in the monthlong strike that ended Nov. 17 and the 2019 strike. While the specifics differ, unions in all three cases said employers were profiting from a pay structure that limited younger workers’ lifetime earning potential.

“From the owners’ standpoint, they want to do anything to hold down salaries. Period,” said Jim Quinn, a veteran sports attorney who has represented players’ unions in professional leagues.

“In a sense, it’s like a two-tier structure,” Quinn added. “There’s before free agency and after free agency.”

The league chose to lock out the players—management’s version of a strike—after the collective bargaining agreement expired, arguing it was the best way to address the labor dispute and save the 2022 season.

“This defensive lockout was necessary because the Players Association’s vision for Major League Baseball would threaten the ability of most teams to be competitive,” MLB commissioner Robert Manfred Jr. wrote in a letter to fans. “It’s simply not a viable option.”

The players, who now are barred from accessing employer facilities, aren’t exactly flush with good options, aside from continuing to press at the bargaining table.

Max Scherzer, an ace pitcher who serves on the union’s executive subcommittee, said last week the players have “major problems” with the 2016 collective bargaining agreement. “First and foremost, we see a competition problem in how teams are behaving because of certain rules within that,” he said. “And so adjustments have to be made in order to bring up the competition.” 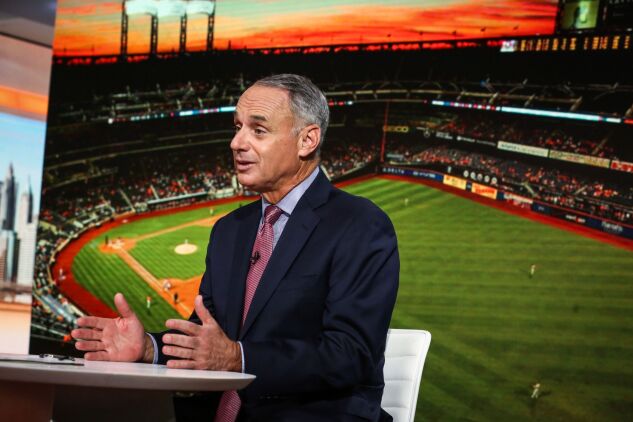 Outside of prevailing in collective bargaining—essentially, hoping that management will feel the pressure and compromise—the union has one option that sports lawyers and professors said they are unlikely to choose, and a last-ditch legal move.

The union could file an unfair labor practice charge with the National Labor Relations Board, arguing that the league refuses to negotiate in good faith. But that process would likely take months and do little to resolve the conflict before the season starts. An unfair labor practice charge was instrumental in ending the last major baseball strike in 1995, but not until after a World Series was canceled.

The other option would be for the players’ union to dissolve itself so it could file an anti-trust lawsuit.

In this scenario, the union would declare that it no longer represents the players, allowing the suddenly non-unionized athletes to file an anti-trust suit against the owners. That complaint would argue, in some form, that the lockout obstructs the free market of professional baseball.

Federal law prohibits unions from filing anti-trust lawsuits against employers, which is why the union would first have to dissolve, said Gabriel Feldman, director of the sports law program at Tulane University.

It’s been done before. In 1992, a federal jury found that the NFL had violated antitrust laws after the players’ union voluntarily disbanded to challenge free agency restrictions in court. The league returned to the bargaining table, which resulted in football salaries “becoming 10, 15 times higher than they were at the time,” said Quinn, who was the football players’ lead counsel in that case.

The union disbanded again in 2011 to allow Tom Brady, Peyton Manning, and nine other players to file an antitrust lawsuit after collective bargaining broke down. A federal judge ordered the league to end the lockout, and team owners ratified a new agreement while the case was pending appeal.

But, Quinn said, such a move is seen as the “ultimate bomb,” to be used only when negotiations fail.

The MLB Players Association declined to comment on its strategy. The league didn’t respond to calls and emails seeking comment.

In his letter, Manfred noted that MLB has no salary cap, as is common in other sports, and that teams had committed a record $1.7 billion in free agent deals in November—a good thing for those players but also a point that called attention to younger stars’ main gripe.

While free agency has existed in baseball for decades, sports lawyers say it’s become more of an issue for players due to the rise of advanced analytics.

Decades ago, where salaries were lower, star players would often play past their prime. But new data shows most players’ performance declines rapidly after age 30, making owners less likely to give lucrative free-agent contracts to older players, said Brad Snyder, a Georgetown Law School professor who specializes in sports contracts. Injuries can deny players a chance at ever reaching free agency.

And less-established younger players also can be relegated to the minors during rebuilding years, when owners of smaller teams sometimes intentionally tank their team’s record to get better draft picks. Keeping young, promising players in the minor leagues delays the start of the six-year clock, limiting their lifetime earning potential, Snyder said.

The standoff likely will continue until spring training in February, when players and owners will see the threat of lost revenue, sports experts said. The last significant labor dispute in professional baseball, in late 1994 and early 1995, lasted more than 200 days.

“Each side is trying to force the other to blink,” Snyder said in an email. “Nothing is going to happen until mid-February when pitchers and catchers report and the players and owners start to lose money.”