Immigration activists in front of the Supreme Court.
Photo by NICHOLAS KAMM/AFP via Getty Images

The Deferred Action for Childhood Arrivals program, launched in 2012 by the Obama administration, offers protection from deportation and the ability to work legally to some 600,000 undocumented people who came to the US as children. The Biden administration released a final rule Wednesday in hopes of bolstering a legal defense against an onslaught of opposition that has plagued DACA since its inception.

But the new rule, which takes effect Oct. 31, will apply only to DACA renewal requests, not to new applications, which are currently on hold amid litigation.

It also lacks permanent protection, putting the lives of tens of thousands DACA recipients and immigrant youth in the balance, Juliana Macedo do Nascimento, the deputy director of federal advocacy for United We Dream and a DACA recipient, said Thursday.

“Congress still must act to make sure that we can get permanent protection for undocumented young people,” she said. “President Biden cannot hide behind the courts or Congress. He must take bold action now and use all his power to make sure Congress finally takes action and passes the path to citizenship for millions.”

DACA has been under attack in Republican-led states even after a Trump administration effort to rescind the program was overturned by the US Supreme Court in 2020. Last year, Houston-based US District Judge Andrew Hanen ruled the program was unlawful. 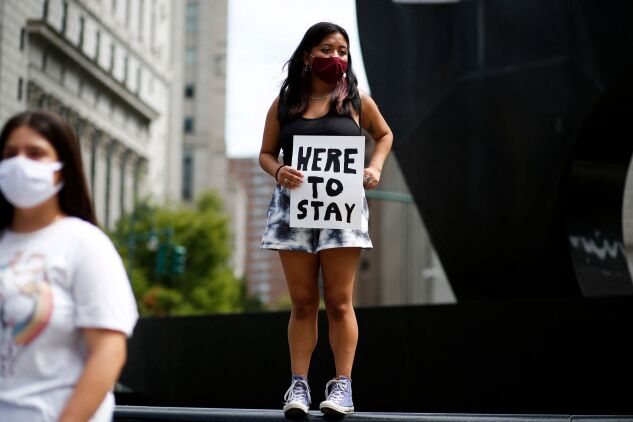 A woman joins a demonstration supporting DACA at Foley Square in New York, on Aug. 17, 2021.
Kena Betancur/AFP via Getty Images

The US Court of Appeals for the Fifth Circuit heard arguments in an appeal of that ruling in July and could issue a decision any day now.

The DACA rule was crafted in response to legal attacks but doesn’t make the program bulletproof in court. The Fifth Circuit is weighing whether DHS has authority to establish broad enforcement exceptions at all. New DACA applications are on ice while the litigation is pending, though renewals have continued.

The Fifth Circuit could decide to terminate DACA, and the US Supreme Court likely would have the final say on the program’s fate. While the new rule addresses several procedural criticisms of the program, it can’t inoculate it from constitutional challenges.

Only Congress can provide secure protections for young immigrants. The House passed a bill () to provide a pathway to citizenship for Dreamers last year, but the Senate — evenly divided between Democrats and Republicans —hasn’t taken it up amid increasingly polarized immigration politics.

Elected officials “were publicly open, stating that we support these young people, these DACA recipients,” said Carlos Vargas, supervising immigration navigator of Make the Road New York. “So, now our communities will have to hold them accountable and say, well, put your money where your mouth is. This is people’s lives at stake.”

The final rule also rejected requests from advocates to broaden the eligibility requirements set in the Obama-era policy. DACA will continue to apply only to approved young people who came to the US as children and have continuously lived in the country since 2007.

“The majority of undocumented immigrant youth who are graduating from high school this year are actually not even eligible because of arbitrary cutoff dates,” Macedo do Nascimento said. “With the issuing of this new rule, the Biden administration had an opportunity to be bold, but instead, they chose more of the same.”

The Biden administration acknowledged those concerns in its final rule but said changing the eligibility could undermine DHS’s “enforcement messaging.” Keeping the dates the same as they were in the original DACA policy makes clear that DHS “is not incentivizing future migration flows,” the regulation says.

Advocates maintain that the approach is a significant missed opportunity.

“Our opponents aren’t shy about their intent to detain and deport immigrants,” Macedo do Nascimento said. “And we need the Biden administration to take bold protective action to meet the urgency of this moment.”

To contact the editors responsible for this story: at jmartin@bloombergindustry.com; at rmeszoly@bgov.com