In case you missed it on “Good Morning Britain,” a new survey found that about two-thirds of U.K. workers are confused about how to greet co-workers and would appreciate some guidance from their employers.

On other fronts, it appears that mental health issues are being better understood in U.S workplaces these days, with less fear and stigma attached to them, although there’s still work to be done. And the youngest workers are storming into the workplace. Get the story in this week’s HR Buzz.

ABZs of Snagging the Youngest Workers

Be fair. Communicate often. And don’t keep them dangling: 20 percent of Gen Z said the right amount of time from interview to hiring is five days.

Most important, in fact the No. 1 factor in 44 percent of Gen Zers’ decision to join a company, is the recruiter, talent acquisition software provider Yello found in a new survey. So show them some TLC, early and often, says the Chicago-based company. 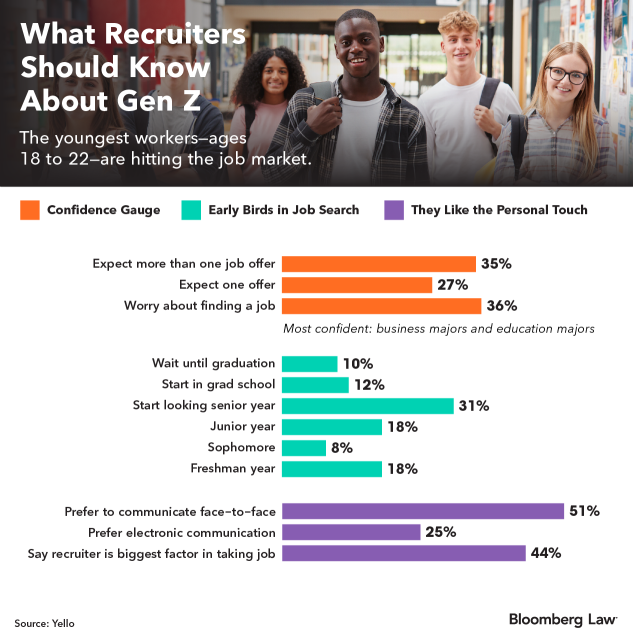 Gen Z doesn’t believe in letting the grass grow on their job searches. Only 10 percent wait until graduation to start looking; a fifth (18 percent) being searching freshman year.

These 18- to 22-year-olds might have been weaned on high-tech, but the personal touch is an essential element for them in choosing an employer. Fifty-one percent prefer to communicate face-to-face (versus 25 percent who favor digital means). But they still want an employer’s technology to be up-to-date. Forty-six percent have applied for a position on a mobile device.

Biggest turnoff for Gen Zers: being treated unfairly or disrespectfully. And a lack of communication can be taken as such.

“Your Gen Z candidate expected to hear from you yesterday,” Yello says in the report.

Also tying in with their fondness for the human touch, the highest percentage of Gen Z workers (62 percent) look for jobs via referrals from former employees of companies. Fifty-six percent use job boards, 55 percent use company websites, 55 percent use career centers, and 51 percent go to hiring events.

Oops, that air kiss wasn’t supposed to land. In a recent survey that’s gotten attention on both sides of the Atlantic, British jobs site Totaljobs discovered that over a third (38 percent) of U.K. workers find greetings at the office awkward, 76 percent want physical contact reduced, and 68 percent would like some guidance from their employers on the proper approach.

Need a hug? Probably not. Only 18 percent of employees in their 20s said it would be OK to get a hug at work, and a frostier 5 percent of those in their 40s and 50s said so.

Body language expert Jo Hemmings teamed up with Totaljobs to help interpret the survey in its Rules of Engagement report. How to greet co-workers is a “highly complex, embarrassing, and in some instances, even humiliating subject.” Things can go “horribly wrong, given that there are no formal ‘rules’ around workplace greetings,” she said.

So it’s not just you and stop going over that weird encounter in your head—37 percent of those surveyed had been caught up in “an awkward, toe-curling, confused handshake.” And 15 percent have agonized over it, losing productivity in the process.

It’s a matter of “proxemics,” Hemmings wrote, meaning the study of human space and how we react within it.

Hemmings advises that people greet colleagues and clients with an extended hand “so it is clear you are approaching for a handshake and it can’t be misread as a hug or potential air-kiss.” And don’t wave when you’re too close—it can mis-signal that you’re going for a high-five.

The report says it’s up to employers to provide clarity and that misfirings in communication can lead to loss of productivity and a less comfortable workforce.

The survey sparked lots of conversations, including being debated on “Good Morning Britain.”

Turning the Light On About Mental Health

Things are opening up in terms of how people understand mental health issues, according to a new survey from the American Psychological Association.

Psychologist David Ballard, director of the APA’s Office of Applied Psychology, said there are many things employers can do to “normalize” the issue, such as “modeling openness and communication,” offering good mental health benefits and EAPs, and being flexible about leave.

They also can train managers to “recognize when someone is struggling” and to know what resources are available. And given that people spend more of their waking hours at work than anywhere else, employers should establish a low-stress, respectful environment where workers feel safe and supported, he said.

The survey of 1,006 U.S. adults, 67 percent of them employed, was conducted for Washington, D.C.-based APA by The Harris Poll.

To contact the editor responsible for this story: at charasty@bloomberglaw.com