Chad Wolf, the acting secretary of homeland security, moved to ratify a slate of measures laid out by his predecessor, Kevin McAleenan, brushing aside recent court rulings that said it was likely that both men improperly served in that role.

A Department of Homeland Security notice, signed by Wolf Oct. 7 and scheduled for publication in Friday’s Federal Register, purports to affirm a number of previous actions by McAleenan, who served as acting secretary immediately after the April 2019 resignation of —the last Senate-confirmed person to lead the department—and one previous action by U. S. Citizenship and Immigration Services Deputy Director for Policy Joseph Edlow.

The notice lists ratification of the USCIS visa fee schedule rule, a July 28 memo altering the Deferred Action for Childhood Arrivals program, several rules governing asylum processes, and the “public charge” rule. Almost all have been challenged in court. 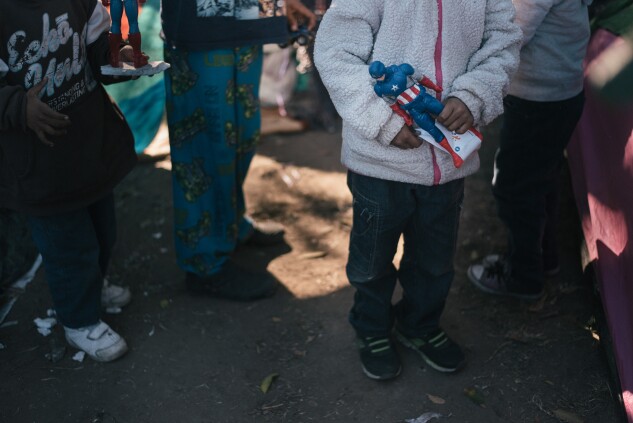 An asylum-seeking child near the Tijuana border crossing.
Photo by Luis Antonio Rojas/Bloomberg via Getty Images

Federal judges in Washington and in Oakland, Calif., have said immigration advocates likely will prevail in their arguments that neither Wolf nor McAleenan were properly elevated to the acting secretary slot after Nielsen stepped down, building on an August finding by the Government Accountability Office general counsel. President Donald Trump’s administration disputes those determinations.

“DHS lawyers declaring that the Department’s past actions are valid doesn’t make them so,” House Homeland Security Committee Chairman (D-Miss.) said in a statement to Bloomberg Law. “This is an admission that they have made a series of grave errors and are now trying to clean up their mess.”

Trump has formally nominated Wolf for the permanent position. While the Senate Committee on Homeland Security and Governmental Affairs approved his nomination, the full Senate has yet to vote on it.

“The Department continues to maintain that the prior succession order designating Kevin K. McAleenan as Acting Secretary was valid and that Acting Secretary McAleenan had the authority to take the actions being ratified in the appendix,” Ian Brekke, deputy general counsel at DHS, said in the notice. “The Department issued this ratification and is now publishing it in the Federal Register out of an abundance of caution.”

The DHS didn’t immediately respond to a request for comment on the ratification notice or recent court rulings questioning Wolf’s authority to act.

“It makes people more subject to the whims of the president, so they’re going to be less likely to tell him when he has a genuinely bad idea.”

Nielsen, before her resignation, had improperly amended the rules of succession to set up McAleenan as her temporary successor, according to the GAO. Subsequent changes made by McAleenan, leading to Wolf’s provisional appointment— and that of Kenneth Cuccinelli, who briefly led USCIS, were also invalid, the accountability office said.

This notice is the DHS’s latest attempt to “cure” the succession issue, said Jesse Bless, director of federal litigation for the American Immigration Lawyers Association and counsel for plaintiffs challenging Wolf’s authority.

“There’s a reason why Congress and the Constitution have tried to put a check on unconfirmed executive level, or secretary, people serving who are not confirmed,” Bless said. The rules listed in the notice are “changing the landscape of immigration law.”

In his Oct. 9 ruling that blocked the USCIS visa rule, Moss concluded that ratification of previous agency actions may not be the fix the government needs to legitimize McAleenan’s actions.

An acting secretary may not amend the agency’s order of succession, and because of that Wolf’s appointment was likely ineffective, the judge said, adding that because Wolf “acted without authority” when he approved the visa fee final rule and attempted to retroactively ratify the proposed rule and the final rule, both ratification actions were “not in accordance” with the Administrative Procedure Act.

Moss’s ruling came just 10 days after White found that a separate group of plaintiffs challenging the visa fee rule were likely to succeed on the merits of their claims that Wolf is unlawfully serving in his role. The Xinis decision predated both of those.

“The fact remains that Kevin McAleenan, Chad Wolf and Ken Cuccinelli were illegally appointed to their positions, and their policy actions should be invalid,” Thompson, the Homeland Security committee chairman, said.