A man wearing a mask walks past the New Museum in New York City during the Coronavirus Pandemic on Oct. 19, 2020.
Photo by Alexi Rosenfeld/Getty Images

Pandemic-induced layoffs, furloughs, and pay reductions have accelerated museum workers’ ambition to unionize, organizers and advocates said. The campaigns are a relatively new phenomena in a sector that’s historically eschewed such measures and look to be gaining momentum.

Conversations around equity and compensation spurred an upswell in organizing drives just before the Covid-19 pandemic. When museums shut down, in some places firing workers at the center of the unionization efforts, organizers worried the wider campaign was in peril.

Instead, the contagion’s impact on workers propelled more widespread support for organizing, said Maida Rosenstein, president of the United Automobile Workers Local 2110. The union has coordinated efforts to organize museum staff across New York City, including at the Museum of Modern Art and the New Museum of Contemporary Art.

One estimate puts the rate of unionization in the museum industry and similar professions at about 13.2% in 2020, the highest rate since 2013 when professors Barry Hirsch and David Macpherson of the Union Membership and Coverage Database estimated it to be 15.5%.

Those estimates have a wide margin of error due to a limited sample size, but the trend is certain.

Workers from at least a dozen museums successfully voted to unionize via a National Labor Relations Board election in the past three years, according to Bloomberg Law data, a relatively sharp spike in a realm where only one other group of museum staff had voted to unionize since 2011, not including those that were voluntarily recognized or those that never made it to an election.

While there were about 37,500 archivists, curators, and museum workers in the U.S. as of 2019, according to the Bureau of Labor Statistics, the employment footprint of those institutions is actually much larger: including desk receptionists, janitors, cafe workers, and more within those parts interacting with the public.

Inequality in an industry tied to some of the world’s wealthiest people is a strong incentive to unionize, organizers said. And because museum workers are likely to have master’s degrees or higher levels of education, the comparatively low pay creates barriers to entry.

The result is often a lack of diversity, and a perpetuated culture where workers are encouraged to feel lucky to have a job, academics said.

The pandemic revealed fissures in museum structures, said Anne Ackerson, a lecturer at Johns Hopkins University and independent consultant specializing in museum leadership and management topics. Combined with the ongoing conversations around social justice in America and following the #MeToo movement, now is a time for the public to look more closely at institutions, she said.

“The pandemic highlighted that without unionization, workers had no say in their employment,” the UAW’s Rosenstein said. “People felt very much that there was no accountability by museum leadership to their staff. There’s continuing interest among museum workers in unionization.” 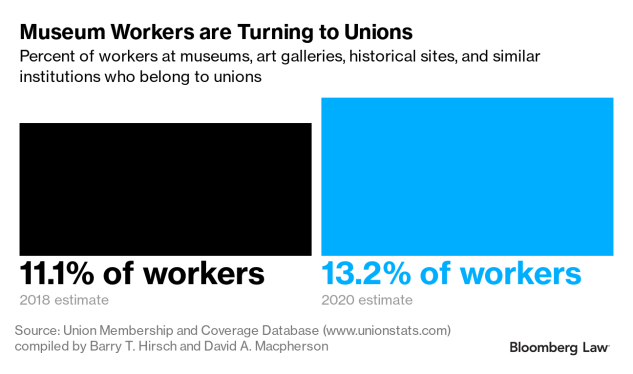 Dana Kopel, a former senior editor and publications coordinator at the New Museum, helped organize the union there. She was laid off in June 2020, more than two years after the staff voted to unionize. The chair and two delegates of the union’s organizing committee, along with most of the bargaining committee, also were laid off, she said.

“They were clearly targeting those of us who were involved,” she said. The union filed an unfair labor practice charge with the NLRB, but they’ve been forced into ongoing arbitration, Kopel said.

Kopel has since become an organizer for the Office and Professional Employees International Union Local 153.

“Like most museums, we had to make difficult decisions to ensure we could weather the storm, including staff reductions, salary and budget cuts, and program cancellations,” the spokesman said via email. “Our reduction in staffing was made across all departments, all staff levels, and included both union-represented and non-union employees whose work was drastically reduced or eliminated.”

Forty-three percent of U.S. museum staff lost income due to the pandemic, according to an April survey of 2,666 current and former museum employees, consultants, volunteers, and students conducted by the American Alliance of Museums. Nine percent were laid off at some point during the pandemic, with 5% still unemployed when surveyed.

Sarah Shaw, a former educator at the Philadelphia Museum of Art, also became an organizer when her job was eliminated by pandemic-induced cuts. She’s now part of Cultural Workers United, a department within the American Federation of State, County and Municipal Employees, created to assist cultural and museum workers with unionizing.

“There’s a lot of dynamics within the culture of workplaces like museums that were exacerbated and highlighted by pandemic,” Shaw said. “That has really encouraged workers to look to unionizing as a way to address problems that may not be the direct result of—but are at least related to—the incredible power imbalance within museums.”

The jury’s still out on how museums have responded to both internal and external pressures, said Johns Hopkins’ Ackerson.

“There have been some examples of some administrations really stepping up their game and being really intentional,” she said. “And then there are other examples of where it’s really just lip service.” 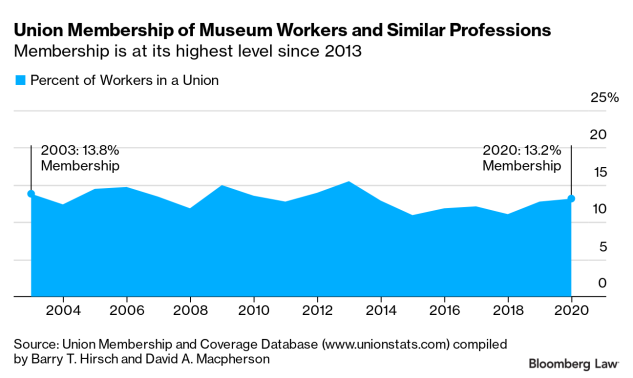 Collective action among museum workers is a new trend in a field that’s long been passed over by organized labor. That neglect is partially due to the professional nature of much of their work, experts said.

A certain sense of exceptionalism in the art world is also a factor, Kopel said.

“It’s heartening to see people organizing—it does something to undo the idea of art people not being workers,” she said. “We deserve rights like everyone else.”

“The broader unionization push in museums in recent years has brought to light inequities endemic in the field, and sends a strong message that we need to do better,” Mass MoCA interim director Tracy Moore said in an email. “We respect and value our employees and share a common goal to create an equitable and welcoming place to work and visit.”

The career path for professionals in the field is also a factor for why workers want to organize, said Laura-Edythe Coleman, director of the arts administration and museum leadership program at Drexel University. Unpaid internships and experience typically limited to a single museum mean that it’s hard to move laterally, and workers are scared to risk that status, she said.

“You enter the field unpaid and unvalued, and only learn how to function in a specific instance,” Coleman said. “That makes it hard to transfer and thrive.”

Other factors are endemic to the field and the wider labor market. Wage stagnation and rising income inequality has occurred for decades, according to Kate Bahn, the director of labor market policy and chief economist at the Washington Center for Equitable Growth.

That’s because the “college wage premium” has declined, she said. In other words, museum workers have college degrees that aren’t translating into higher wages. The median annual wage for archivists, curators, and museum workers was $52,140 in May 2020, according to the labor statistics bureau.

“People were paid low wages because they didn’t have a lot of labor market power,” Bahn said.

The perception of museums by workers has changed over the past 50 years, Johns Hopkins’ Ackerson said, away from them being “idyllic islands of beauty.”

“You felt as though you were honored to be working in a museum,” she said. “On the other hand, they are workplaces.”