Democratic lawmakers are largely passing on opportunities within their control to swiftly overturn Trump administration regulations they loathe, even as the easiest path to do so is about to expire.

Democrats have acted on just one of six resolutions they’ve introduced using the Congressional Review Act, a law that allows legislators to strike the previous administration’s last-minute regulations if both chambers approve it.

The Senate passed a repeal of former President ‘s relaxation of restrictions on methane emissions from oil and gas wells, but have yet to consider the other five. The full House has yet to vote on any of them.

Regulatory policy veterans attribute the hesitance to several factors. CRA resolutions eat up precious floor time that Democrats would rather use to advance legislative priorities while they have control of the White House and both chambers of Congress. The executive branch can rewrite rules without trying to corral its party’s swing voters in Congress.

And some Democrats are wary of limiting their ability to rewrite regulations. The law largely prevents agencies from issuing rules that are “substantially” similar to those that Congress cuts, though it’s not clear what that really means and courts have never weighed in.

Lawmakers’ hesitance to advance the CRA resolutions suggests “continued unease among Democrats with using what some perceive as an inherently deregulatory tool,” said James Broughel, a fellow at the Mercatus Center, a conservative think tank.

The window for Democrats to use the tool is closing. CRA resolutions can’t be filibustered in the Senate, meaning they can advance with a simple majority. Scholars estimate that will change in mid-May, when 60 votes would be required.

Republicans used the CRA after Trump’s election to repeal 14 Obama-era rules, including ones that limited the ability of the mentally ill to buy firearms and forced oil companies to disclose their payments to foreign governments.

Lawmakers are scheduled to return to Washington next week. Here’s where they stand on each resolution — and how the Biden administration is already working to repeal a few of the rules without Congress. 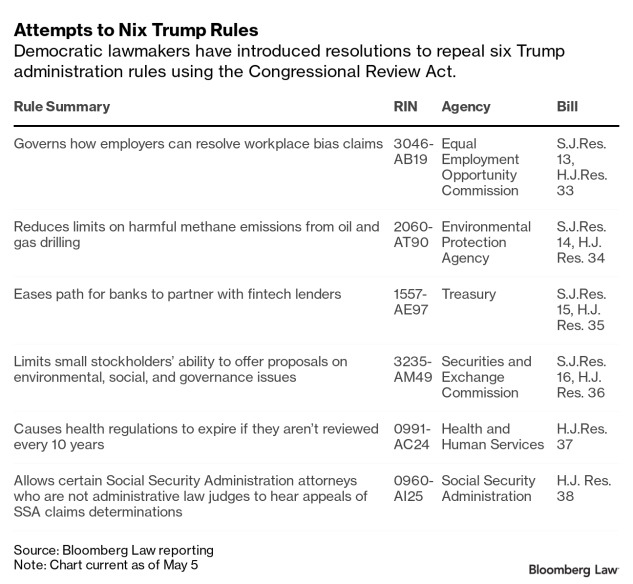 Sen. (I-Maine) and Sen. (D-W. Va.), whose backing would be essential on a party-line vote in the evenly divided Senate, haven’t decided whether they’ll support an effort to kill a rule governing how employers can resolve workplace bias claims, both senators’ spokesmen said by email Wednesday.

The Equal Employment Opportunity Commission’s so-called conciliation rule mandated the agency turn over more data to employers during a process used to resolve discrimination disputes as an alternative to litigation.

The rule is one of two that Senate Majority Leader (D-N.Y.) said in March that the chamber’s Democrats would vote to repeal using the CRA. But he has yet to put the measure on the floor for a vote—and if he did, it’s not clear that he’d have the votes to pass it.

This is the only CRA measure to receive a Senate vote so far.

It passed, 52-42, with support from three Republican senators— of Maine, of Ohio and of South Carolina—as well as some oil and gas producers including .

The House has yet to consider the resolution () to repeal the rule. House Majority Leader (D-Md.) backs the measure, as does President . Hoyer’s office didn’t respond to a request for comment about why the House hasn’t voted on the repeal yet.

Congressional action on a rule that would ease the path for banks to partner with financial technology lenders may not be necessary: the Treasury Department is expected to at least reconsider it.

Progressive Democrats introduced CRA resolutions (, ) targeting the Office of the Comptroller of the Currency rule known as “true lender.” They have the support of Senate Banking Committee Chairman (D-Ohio) and Sen. (D-Md.). Brown’s office told Bloomberg Law that he intends to push forward with a repeal of the rule, but if he is unsuccessful, the current version is unlikely to take effect.

Treasury Secretary is close to naming Michael Hsu, a top Federal Reserve bank examiner, to serve as the acting comptroller to replace Blake Paulson, the current acting comptroller who was appointed during the Trump administration. While Hsu’s views on the true lender rule aren’t known, “we have to assume that he is unlikely to defend the rule,” said Isaac Boltansky, a policy analyst at Compass Point Research & Trading.

Senate Democratic leadership has yet to back Brown’s effort to repeal a Securities and Exchange Commission rule that limits the power of small shareholders to submit proposals on environmental, social, and governance issues for votes at companies’ annual meetings.

The AFL-CIO, U.S. Presbyterian Church, and California State Teachers’ Retirement System are among dozens of pension funds, religious groups, trade unions, and other organizations that have urged lawmakers to approve Brown’s resolution.

The groups have argued that shareholders’ proposals help elevate matters that could prove costly to investors if management neglects the issues. An SEC representative didn’t immediately respond to a request for comment.

The bill to undo automatic expiration of health regulations is unlikely to move in the Senate.

Sen. , the top Democrat on the chamber’s Health Committee, wants to see the rule revised by the Department of Health and Human Services and not repealed by Congress, her spokeswoman said by email Wednesday.

The Biden administration has already begun undoing the rule. HHS in March delayed its effective date until 2022.

This is another effort that has the support of influential committee chairs but not necessarily the party’s congressional leadership.

The measure () would repeal a rule that allows certain Social Security Administration attorneys who are not administrative law judges to hear appeals of SSA claims determinations.

Eight Democratic committee leaders in both the House and Senate, including Ways and Means Chairman (Mass.) and now Senate Finance Chairman (Ore.), wrote last year that the regulation would make it harder for Americans to appeal a denial of Social Security benefits.

Neal and House Judiciary Chairman (D-N.Y.) back legislation to repeal the rule.