Members of National Nurses United read the names of registered nurses who've died during the pandemic while demonstrating for greater safety protections in Washington, D.C., on May 12.
Photographer: Win McNamee/Getty Images

Health-care workers in several states walked off the job during the darkest moments of the coronavirus pandemic to pressure employers for better pay and working conditions—a strategy that had decidedly mixed results.

While some unions were able to win significant raises and safety improvements at the mere threat of a strike, others remain deadlocked with management months after picketing. Nationally, the number of new collective bargaining agreements in health care has dropped by more than a third since the start of the pandemic, reaching 140 since March 2020, as strikes rose by 22%, to 28 total in that span, according to a Bloomberg Law database of union contracts and work stoppages.

The data, along with interviews with union leaders and workers in three states, revealed differences in the effectiveness of union strikes based on various factors, including circumstances specific to particular health-care industries or employers. The public health emergency elevated the struggle of low-income nursing home workers in the public consciousness, while nurses on the front lines at intensive care units found themselves overwhelmed by the pandemic but with little leverage to pursue their goals.

“It was a horrible time,” said Kathy Santoiemma, a registered nurse and chair of the New York State Nurses Association chapter at Montefiore New Rochelle Hospital near New York City, where nurses went on strike in December as cases soared. “I never want to live through that again. I mean, my hospital was entirely Covid at several points.”

The two-day strike sought to remedy staff shortages caused by an exodus of nurses to nearby hospitals that offered better pay and benefits. Little has changed since the strike, as the bargaining unit and Montefiore are still battling for a contract that expired in 2018.

Even in normal times, health-care workers have a harder time striking than unionized workers in other industries. The life-and-death nature of the work nurses provide makes it illegal for them to walk out without prior notice; the union must give management at least 10 days to find replacement workers and can only strike for a few days, at most.

That removes the uncertainty and limits the public relations exposure that often gives employers an incentive to cut a deal. In 2019, for example, it took the United Auto Workers 40 days of striking to reach an agreement with General Motors. 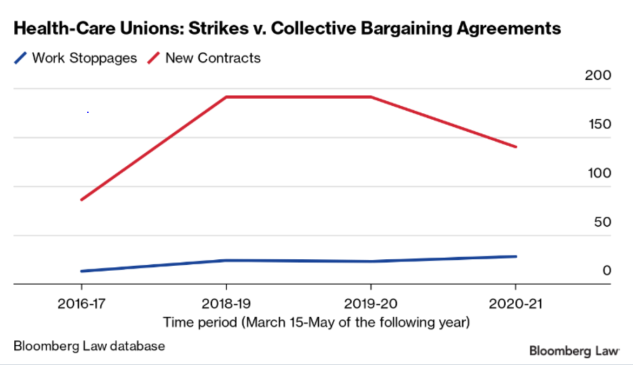 A Montefiore spokeswoman acknowledged an email inquiry from Bloomberg Law but didn’t respond by publication time.

A silver lining is possible: New York state lawmakers passed legislation this month to set higher staffing levels in nursing homes, inspired in part by the nursing strikes at Montefiore and elsewhere in the state. Gov. (D) hadn’t signed the bill as of May 18, and his office didn’t respond to requests for comment.

In the New York capital, a similar strike involved more than 1,500 nurses at Albany Medical Center. The NYSNA said one of the flashpoints was management’s requirement that nurses re-use N95 respirators as many as 20 times.

The strike didn’t accomplish much, however. The union and management remain locked in a contract fight, and management recently accused the union of joining with communists at a May Day rally.

In a statement, hospital spokesman Matthew Markham denied accusations of staffing shortages and said the union hasn’t responded to a contract proposal the hospital submitted in January. Management notified hospital staff of the local Communist Party appearance with the union “in the spirit of transparency and proper attribution,” he added.

In Illinois, things turned out favorably for a group of nursing homes affiliated with the Service Employees International Union. Workers at 70 nursing homes owned by multiple companies sent strike notices to their employers in May 2020 demanding stricter safety protocols, protective equipment, and higher pay—a risky gambit at the time, some believed.

“Everyone thought it was a very bad idea,” said Shaba Andrich, vice president of nursing homes for the SEIU Illinois health care division, referring to fellow union activists. “They were like ‘No, this is the wrong thing to do. People are going to see it as abandoning residents during a pandemic.’ … And, you know, we thought they were wrong.”

Before the strike took effect, SEIU was able to win a contract that provided $15 in base pay along with additional pay increases, three months of pandemic hazard pay, paid time off for Covid-19, and beefed-up safety protections. 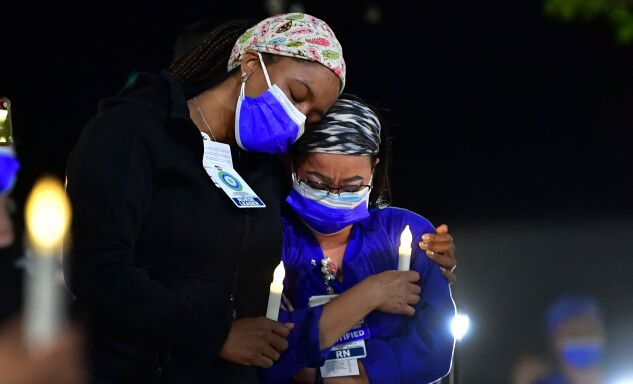 Nurses Theresa Austin (L) and Rosell Mahawan console one another during a candlelight vigil at a hospital in Panorama City, Calif., in April.
Photographer: Frederic J. Brown/AFP via Getty Images

Janine Schoen, vice president of policy for Alden Management Services Inc., one of the nursing home companies covered in the contract, said in an email that management followed public health guidance “well before the strike threat and will continue to follow their guidance.”

It was an important victory for SEIU, Andrich said, and the union sought to replicate the contract at other nursing homes through a process known as pattern bargaining.

In November, SEIU workers at 11 nursing homes in the Chicago area went on strike against Infinity Healthcare Management—pledging to picket as long as needed to secure pandemic pay raises. By day 12, they had an agreement.

Health-care workers scored another victory in Connecticut this week, signing onto a deal brokered by Gov. Ned Lamont (D) that lifts wages to $20 an hour, at least $5 more per hour than current rates. The agreement averts a strike at 26 facilities statewide.

And in Oregon, workers in nursing homes—which account for 53% of all Covid-19 deaths statewide—reached a deal last month with Avamere, a major operator, to raise wages to $18 an hour and reduce turnover through new training and other measures.

It’s likely that key elements will be repeated in contracts with at least three other providers in the state, said Vanessa Veselka, organizing director for SEIU Local 503.

“You had a lot of energy with workers who were just like, ‘I’m done. I am done. I’m not staying in this industry,’” Veselka said.