Hazard pay wouldn’t have crossed the minds of grocery store workers before the coronavirus came along.

No laws require hazard pay for private workers, and only one union contract negotiated in the past 12 months even mentions it, according to an analysis of collective bargaining agreements in Bloomberg Law’s database.

But now some retail workers and medical professionals want hazard pay to become a matter of law for workers deemed essential during pandemics, and the call is gaining bipartisan support. Senate Minority Leader (N.Y.) is among Democrats who last week called for legislation that would allow for “Pandemic Premium Pay” for both private and public-sector workers. President said he would be open to bonus pay for health care workers, and the conservative think tank American Action Forum supports the idea more broadly.

“Healthcare work is always hazardous, and we’ve never really gone down this path,’’ said Jane Hopkins, executive vice president of Service Employees International Union Healthcare 1199NW, which is seeking hazard pay of $5 an hour in contract negotiations with hospitals in Washington state. “But it’s becoming very, very obvious that our members need this.”

Private workers, who have no legally mandated hazard pay under any circumstances, have to look to government workers for what could be a model.

Guidance published by the Office of Personnel Management says hazard pay is warranted when an employee is exposed to a qualifying hazard on duty, and that hazardous duty wasn’t accounted for in the classification of the role. An example of this is a firefighter called to fight a wildfire. Law enforcement officers and members of the military are also eligible.

Also taken into account are various levels of risk workers are subjected to while working under hazardous conditions. The Occupational Safety and Health Administration delineates very high, medium, and lower exposure risks when determining which workplaces are covered under certain safety standards.

The “Pandemic Premium Pay” model backed by Democratic lawmakers would offer up to $25,000 in additional wages to a wide swath of employees, covering the start of the crisis to the end of the year. That could be coupled with a potential recruitment incentive of up to $15,000 for essential medical workers. Sen. Elizabeth Warren (D-Mass.) and Rep. Ro Khanna (D-Calif.) Monday also separately called for “robust premium pay” for essential workers in their proposed “Essential Workers Bill of Rights.”

Michigan Gov. (D) agreed to a pay premium for public-facing state employees whose duties require face-to-face interaction, like law enforcement personnel, and workers in state hospitals and veterans’ homes, a spokesperson said in an email. They’re eligible to receive up to $750 every two weeks.

The American Action Forum said hazard pay could be used as an incentive to keep workers on the job, as newly expanded unemployment benefits tempt workers.

Federal workers might not be eligible for hazard pay if businesses lower the risk for workers, by taking “safety precautions” consistent with generally accepted standards, according to OPM’s guidance. In the case of coronavirus, that could mean providing protective equipment, like masks and gloves.

That doesn’t mean workers won’t try to sue for more pay, especially if they’re not being provided with the necessary protective equipment. A Louisiana correctional officer and other federal workers are already trying to bring those claims in a coronavirus-related lawsuit against the government.

Health-care workers could be an example of workers whose claims might be viable, said Melissa Peters, special counsel with Littler Mendelson. They could claim that normally the hazard is controlled or abated by protective equipment, but since that equipment is widely not available, they should fall under the category of hazard pay.

The hazards faced by health-care workers are different from those of retail workers or gig economy workers, Peters said, because they’re potentially in direct contact with Covid-19 patients.

Retail and gig workers are essential to keeping the economy moving, she said. “But does it rise to the level of hazard pay? I don’t think so.”

Worker groups are advocating for hazard pay during the immediate demands of the coronavirus, and possibly establishing precedent and policies that could be used in future public health crises.

Of 132 collective bargaining agreements that have some mention of “hazard pay” within the Bloomberg Law database, 32 contracts in the past five years contain such a mention. Only one was forged in the past 12 months. Workers covered by these public- and private-sector pacts include nurses, various tradesworkers, and librarians. 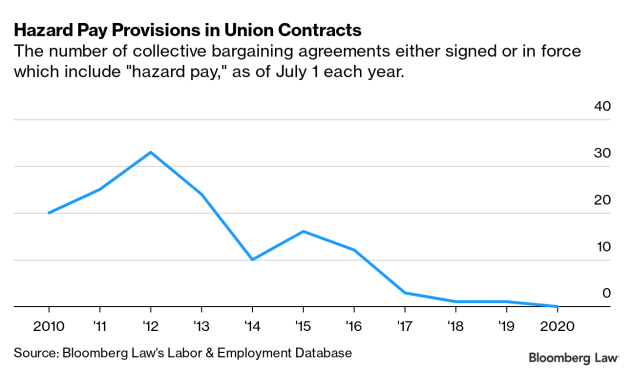 Several new bargaining units of the United Electrical, Radio and Machine Workers union have seen wages that typically hover around $7 an hour raised to $12 or $13 hourly rates during the pandemic, because the workers are still operating during the pandemic, UE President Carl Rosen said.

Hazard pay provisions are rarely negotiated in contracts anymore because the presumption is that the union would prefer its workers not be subjected to hazardous conditions in the first place, Rosen said. He’s even beginning to advocate for layoffs and furloughs for his members instead of pushing for them to keep working in the currently hazardous conditions. Furloughed or laid-off workers can collect the newly increased unemployment benefits, which is many times higher than employees’ day-to-day pay, while keeping them at home to flatten the curve.

Sara Kalis, who is of counsel with Paul Hastings, said she’s advising employers looking to implement hazard pay policies to turn to the federal model, but also “benchmark” based on what other steps businesses are taking.

Todd Logsdon, a partner in Fisher Phillip’s Louisville office, said the notion of hazard pay shouldn’t precede the importance of an employer maintaining a safe workplace.

“When it comes to hazard pay, you want to do something to mitigate and eliminate the hazard, not just paying someone more to deal with the hazard of employment,” Logsdon told Bloomberg Law.

Policies that are forged now could have a lasting effect, said Nicole Page, a partner with Reavis Page Jump LLP.

“I do think that because this will unfortunately not be the last time that workers may be exposed to a potentially deadly virus, that whatever policies are enacted now will be precedent setting for the future,” she said.

—With assistance from Genevieve Douglas