President Donald Trump signs an executive order to try to bring jobs back to American workers and revamp the H-1B visa guestworker program during an April 2017 visit to the headquarters of tool manufacturer Snap-On in Kenosha, Wis.
Photographer: Scott Olson/Getty Images

The Trump administration’s efforts to change the H-1B program and encourage hiring more U.S. workers don’t appear to be having much effect on demand for the skilled guestworker visas.

The number of petitions submitted for this year reached 201,011, about a 6 percent increase from the 190,098 submitted last year. The rise in petitions, the first in three years, came despite a dramatic uptick in the number of H-1B denials in recent months.

All employers seeking H-1B visas send in their petitions the first week of April, the soonest allowed under the law, because the visas run out so quickly.

Figures show that demand for the visas, a staple of the tech industry, remains high despite the administration’s attempt to scale back the program and encourage the hiring of U.S. workers. Employers such as and also continue to request the visas in massive numbers despite H-1B supply remaining at 85,000 visas per year.

“The H-1B program is still alive and well,” and the administration “hasn’t done anything to cut it back sharply,” said David North, a fellow with the Center for Immigration Studies and former official in the Johnson administration.

The H-1B lottery is the product of demand dwarfing supply of the visas. The law allows 65,000 visas each fiscal year, with an additional 20,000 set aside for workers with advanced degrees from U.S. institutions.

Most companies aren’t deterred by the increase in H-1B denials from U.S. Citizenship and Immigration Services, he said. A recent analysis of USCIS data found that 32 percent of initial H-1B petitions were denied in the first quarter of fiscal year 2019, up from 24 percent in FY 2018 and just 5 percent in FY 2012.

In fact, Pack said, last year’s extra denials likely spurred employers to try again for an H-1B, which could be a factor influencing this year’s increase in petitions. 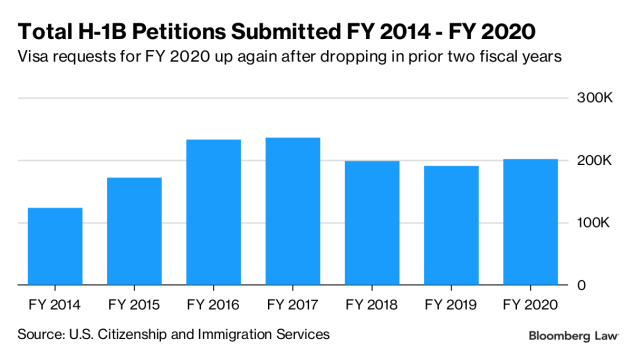 News of the uptick in H-1B demand comes as the Center for Immigration Studies and other advocates for lower immigration levels have been calling on President to keep USCIS Director L. Francis Cissna in his position.

Reports that Cissna may be on the chopping block began circulating after a Homeland Security Department shakeup, beginning with the withdrawal of Ronald Vitiello as the nominee to head Immigration and Customs Enforcement. DHS Secretary Kirstjen Nielsen resigned soon after, followed by acting Deputy Secretary Claire Grady. Vitiello also will be leaving the agency.

Cissna’s tenure has been characterized by policies, regulations, and adjudication patterns largely aimed at the H-1B visa program, an initial target of the president that manifested in an executive order requiring a hiring preference for U.S. workers.

But while Trump’s own focus has shifted to the Southern border, the USCIS has continued chipping away at the visas.

“The H-1B is not dramatic” and doesn’t lend itself to the same media imagery as the border situation, the CIS’s North said. “There isn’t a lot of pressure” to take more drastic action, he said.

“The hunger for cheap labor remains very high and the administration’s increased scrutiny of applications is no substitute for real reforms it should be doing,” Howard University Professor Ron Hira said. “Changes like the resequencing of the lottery help, but only at the margins.”

The USCIS issued a regulation in January that changed the H-1B lottery to maximize the number of advanced-degree holders who get selected.

“Under Director Cissna’s leadership, USCIS is laser-focused on implementing President Trump’s Buy American and Hire American executive order to ensure H-1B visas are awarded through a more meritorious selection process,” agency spokeswoman Jessica Collins said in an email. “Our efforts to improve the H-1B program are working and increasing the number of U.S. advanced degree holders who are selected for the limited number of visas subject to the annual H-1B cap.”

The percentage of petitions filed on behalf of workers with advanced degrees also appears to be rising independent of the new lottery process. Last year, about 50 percent of petitions were for advanced-degree holders, while this year it was 52 percent.

H-1B candidates with bachelor’s degrees tend to go back to school and earn a master’s degree after losing the lottery, Stock said. And employers are becoming less willing to sponsor workers with a bachelor’s degree because the chances of being selected already are higher for advanced-degree holders, he said.

The top employers seeking H-1B workers are outsourcing companies where a large percentage of their workforce is on the visa, Hira said. “Those firms have business models that are tailor-made for winning the lottery.”

But while information technology consulting companies seek approval for the largest number of H-1B workers overall, most petitions are for existing H-1B workers.

In fiscal year 2018, the most recent data available, the employers seeking the most H-1B workers were and Yet Amazon, Microsoft, and Google were the top companies seeking new H-1B workers that year.

Pack said the continued demand for H-1B visas is the product of several factors, including the economy and the “constant pipeline of graduates” of U.S. colleges and universities who need visa sponsorship. And there’s a growing number of employers whose petitions weren’t selected in prior lotteries, whose petitions were denied, or that are having trouble obtaining other temporary visas for critical employees, he said.

“For a lot of people, they just don’t have an option” of not seeking an H-1B, he said.