The United Auto Workers’ decision to extend its strike at least another week means the work stoppage soon will become one of the country’s most disruptive strikes since 1990.

GM will have lost up to 1.56 million potential workdays—including weekends—when the strike enters its 34th day on Oct. 19. That cracks the top 20 list for largest strikes by potential workdays lost, according to a Bloomberg Law analysis.

The UAW didn’t state a reason for extending the strike when it announced its decision late Oct. 17.

The last time the UAW went on strike at GM in 2007, the union immediately hit pause after a tentative agreement was reached in the early morning hours of the strike’s second day. A 67-day strike in 1970 continued after a deal was announced and lasted until the pact was ratified.

“We thank the public for their support during the strike and their continued support as UAW GM members review the tentative agreement,” UAW Vice President and GM department head Terry Dittes said in a statement announcing the strike continuation. “Ultimately, UAW members will make the decision to ratify the agreement. Their unity and solidarity brought us to this moment.”

The strike is set to continue until at least Oct. 25, when local unions are scheduled to conclude ratification votes.

The most disruptive strike by potential lost worker days in recent history was the 2000 commercials strike involving 135,000 workers. The Screen Actors Guild and the American Federation of Television and Radio Artists engaged in the 180-day strike against advertising agencies that resulted in up to 24.3 million lost workdays. 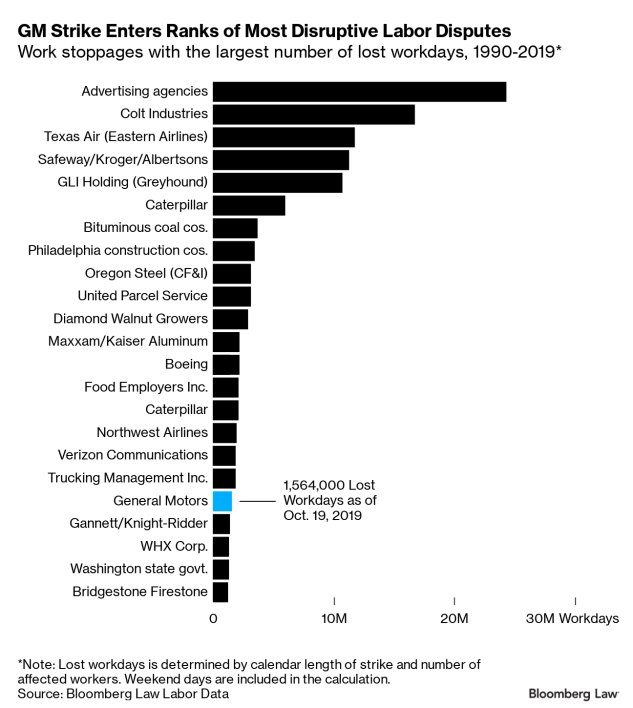 Any impact the GM strike is having on lost productivity is likely much larger than the 1.56 million—and counting—lost workdays.

Every UAW-represented GM job supports 10.5 other jobs in the U.S. economy, according to a study from the Michigan-based Center for Automotive Research. The idled GM plants are leading to slowdowns and subsequent idled plants at companies in GM’s supply lines.

A number of auto suppliers have temporarily laid off workers. At least 5,000 workers in Canada were placed on leave due to the strike.

The strike is costing GM $100 million of profit every day, Bank of America Merrill Lynch analyst John Murphy wrote in a recent report. The work action may now have led to more than $2 billion in missed earnings, according to the analyst.

If GM workers approve the tentative agreement, they may soon see some immediate monetary relief in the form of $11,000 ratification bonuses.

The union also would see a significant inflow of cash from the bonuses since lump-sum cash payments are subject to dues. Ratification bonuses could bring in about $4 million in UAW dues, according to Kristin Dziczek, vice president of the labor and economics group at the Center for Automotive Research.

But the union also has been without dues for more than a month from its GM members, making the potential ratification cash influx “not that big of a windfall,” Dziczek said by email.