The winning ballot initiative that carved out rideshare and delivery companies including and from California’s strict worker-status law hasn’t stopped crackdowns on other app-based businesses, raising questions about whether platforms for on-demand handymen, dog walkers and car mechanics have viable business models.

The San Francisco District Attorney last month sued Handy Technologies Inc. for allegedly misclassifying its workers as independent contractors, seeking civil penalties for each alleged labor code violation on behalf of the company’s more than 27,000 cleaners and handymen in the state.

Taskrabbit Inc., Rover Inc., and Lime scooters have also faced lawsuits seeking to force them to convert their contractors to employees, which carries a host of tax, wage, and job benefit costs.

“A lot of innovation happens here, but any service marketplace will have to consider whether they could continue operating with A.B. 5,” said Anthony Rodio, president and CEO of YourMechanic, an online marketplace for mobile auto mechanics.

“Proposition 22 points to movement in the other direction, but that was very much company driven. I don’t have the resources a public company does to create something like Proposition 22.”

More than two dozen misclassification lawsuits have been filed against gig companies in California since it passed Assembly Bill 5, according to a Bloomberg Law review of federal and state court dockets from September 2019 to present. The majority targeted rideshare and delivery companies, but other service-based gig companies comprised about 21 percent of those cases.

Many of those continue because Proposition 22, on which companies led by Uber and Lyft spent about $200 million, applied strictly to rideshare and delivery drivers. Some date to before A.B. 5, the California law that makes it harder to classify workers as independent contractors, went into effect. 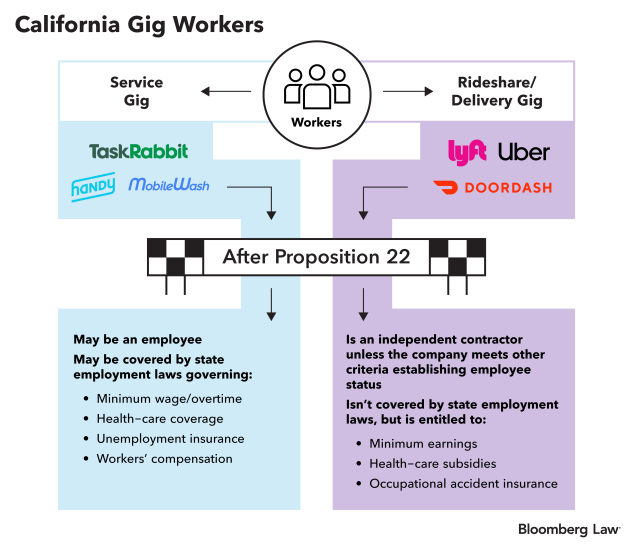 YourMechanic is still litigating a misclassification lawsuit filed in 2017. In February, TaskRabbit, a marketplace for household tasks, agreed to pay $1.8 million to a class of workers who, in 2018, said they, too, were misclassified.

Uber and Lyft didn’t directly respond to requests for comment as to why Proposition 22 only reached delivery and rideshare companies. The Protect App-Based Drivers & Services Coalition—formerly the Yes on Prop. 22 campaign—said in a statement it was because of the “unique nature” of the driving work, but provided no further explanation.

The surge in app-based service platforms aiming to be the “Uber of X” has slowed, in part because the classification question is at the front and center of people’s minds, said Shelly Steward, director of the Aspen Institute’s Future of Work Initiative.

In 2017 and 2018, a coalition of gig companies led by Handy authored legislation exempting app-based work from classification laws in various states. Those rules were essentially Proposition 22 for all apps, without the individualized version of benefits attached to the California rule, Steward said. They passed in several states, including Arizona, Indiana, Iowa, and Tennessee.

But not in California. A so-called “Handy Bill” that would have created “portable benefits” for gig workers in California died in 2018, and now Handy itself is being pursued for alleged misclassification.

The workers are Handy’s employees because the company unilaterally sets the costs of cleaning services and has specific eligibility requirements, San Francisco’s lawsuit said.

During the Covid-19 pandemic, Handy has exercised even more control over its workers by requiring that they wear personal protective equipment and follow detailed instructions set by the company on how to conduct themselves before, during, and after a job, the complaint alleges.

Attorney Michael Lotito of Littler Mendelson said the classification question could cost service-based gig companies outside of the courtroom, too.

“The constant flip-flip in [worker status] laws is creating enormous problems from an investment perspective,” he said.

Chantelle Hartshorne, creative director at Stylebee, an app for professional on-demand beauty services, said she isn’t worried about employee classification long-term, even though the company uses an independent contractor model.

The company hasn’t faced a misclassification suit. Like YourMechanic, the company’s workers are skilled tradespeople, and A.B. 5 wasn’t designed to target those workers, she said.

“Nobody in the hair and makeup world wants to be an employee because they make exponentially more running their own operations,” Hartshorne said. “That being said, there is a level of security and cohesiveness that’s really important, both for delivery drivers and skilled trade workers.”

A spokesperson for pet care platform Rover also said the broad scope of A.B. 5 doesn’t reach its sitters, due to an exemption in the law. Sitters using Rover are in control of their rate and schedules, select which services to offer, and pick their clients.

“We believe that the exemption granted to ‘referral agencies’ in A.B. 5 for certain types of pet care strikes the appropriate balance,” the spokesperson said.

YourMechanic is “collateral damage” in the conversation about worker status, in part because technicians on the platform provide skilled labor and set their own rates, Rodio said. These workers are more similar to a plumber or an electrician, both exempt from A.B. 5, than to a food-delivery agent, he said.

Rodio said he’s already seen the impact on business. “We had a business-to-business partner who was tagged in California for their practices with their own contractors, so after A.B. 5 they weren’t willing to work with contract labor in the state. We work with them in other states, but not here.”

That uncertainty might force Rodio to consider whether his business model works in California, he said.

But Steward, at the Aspen Institute, sees other paths forward for these companies and their workers that don’t require them to exit the state.

“Just because work is arranged via an app doesn’t make it meaningfully different from other types of work,” Steward said. The existing legal framework has shortcomings, particularly for vulnerable workers and workers of color, and those shortcomings need to be addressed rather than creating a new set of laws to regulate this work, she said.

Steward points to New York-based Hello Alfred, which uses an employment model to offer concierge services including grocery delivery and laundry to residents in luxury apartment buildings around the country.

While the decision to use employees over independent contractors increases the company’s operating costs and means growth may take longer, CEO and co-founder Marcela Sapone said her model offers a sustainable marketplace. In October, Hello Alfred announced it closed on around $42 million in its third round of funding.

“All of the current 1099 platform businesses can be change agents by coming to the table to figure out how to balance the need for great jobs with a business model that performs well on Wall Street,” Sapone said.

“I think everyone can get there,” Sapone said. “I think there’s a really sustainable business model within Uber, and hiding within companies like TaskRabbit.”

—With assistance from Erin Mulvaney