A Lyft decal is displayed on a car window in Los Angeles.
Photographer: Patrick T. Fallon/Bloomberg via Getty Images

Lawmakers are poised to use an upcoming Labor Department report as a springboard for legislation to provide portable benefits and other protections for the gig economy workforce, officials told Bloomberg Law.

“I think all of us in Congress, whether we are on the relevant committees or not, will need to take a close look at it because we are going to have to make some changes to our laws,” and the report would help inform those changes, said Rep. Bradley Byrne (R-Ala.), Chairman of the House Education and the Workforce Committee’s Workforce Protections Subcommittee.

Byrne and other lawmakers told Bloomberg Law that updated DOL data on the gig economy will propel efforts to provide protections for the burgeoning workforce that connects with customers through applications like Uber, Lyft, and DoorDash. Gig workers are often treated like independent contractors, therefore forgoing traditional employee protections, including minimum wages and overtime pay, benefits, and workers’ compensation. 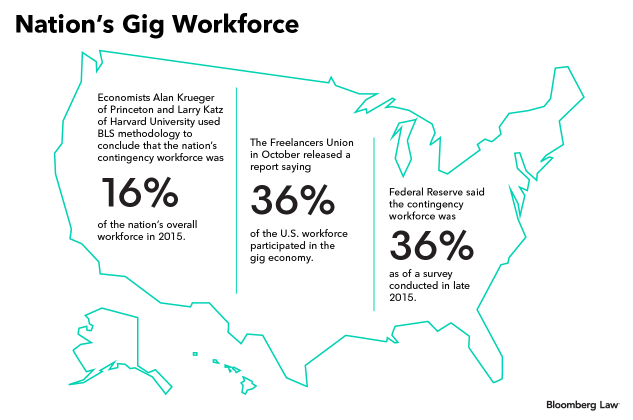 The DOL’s Bureau of Labor Statistics is set sometime toward the middle of this year to release its contingent worker survey results, a highly anticipated first update to the agency’s gig economy workforce survey from 2005. Previous plans to update the data were shelved due to congressional appropriation shortfalls.

The BLS report is expected to include workforce size, demographics, and foothold in industries. DOL Secretary Alexander Acosta recently told the House Ways and Means Committee that the data will help “measure and try to quantify how our economy is changing.”

Meanwhile, a growing number of Democrats and Republicans in Congress are touting a need to update federal laws like worker protections and tax codes. Federal and state lawmakers are already floating changes like adding a new worker classification and creating a portable benefits systems that gig workers can take with them job to job.

Acosta stopped short of previewing findings in the BLS report. “I personally believe there is a substantial change between 2005 and now,” he said during a House hearing.

A spokesman for Acosta didn’t respond to Bloomberg Law’s request for comment.

Acosta may have good reason for those expectations. Research by economists Alan Krueger of Princeton University and Larry Katz of Harvard University, using Bureau of Labor Statistics methodology, concluded 16 percent of workers were in gig jobs in 2015. That’s up from the 10.7 percent in the 2005 BLS report. A Federal Reserve study concluded a third of the nation’s workforce was involved in the gig economy in late 2015. That nearly mirrored findings in a Freelancers Union report saying about 36 percent of the workforce was freelancing.

Not all of those data sets are identical. Researchers often use varying methodology, such as whether to include full- and part-time involvement in the gig economy.

Nonetheless, the new BLS report—an update to the current population survey—is expected to be a key trigger for congressional action, former BLS Commissioner Erica Groshen told Bloomberg Law. The bureau defines contingent workers as those who do not expect their jobs to last or who report that their jobs are temporary. The update includes specific questions designed to better gauge whether a worker should be categorized as being in the contingent workforce and determine their satisfaction with their current work arrangement, earnings, health insurance coverage, and access to employer-provided retirement plans.

“It’s the gold standard. This is why you have a Bureau of Labor statistics so this data is more comprehensive than any other source,” said Groshen, who was the BLS head during the Obama administration, when the Labor Department announced it was reviving the survey. “This sourcing is more transparent than any other source and there is a history because BLS has been doing this survey on and off sine 1995.”

The gig economy isn’t necessarily new. Workers in a wide range of other, more traditional jobs are also often classified as independent contractors.The concept, which has commonly described consultants and even construction workers, has expanded in recent years in-part due to growth of mobile applications. The app technology has made it easier to tap people for short-terms tasks ranging from food delivery to car service.

Such a growth has increased calls for updated laws for the workers who are often considered independent contractors.

Many gig businesses have been hesitant to offer employee benefits, at least partly because they fear it would make courts and regulatory agencies more likely to find that the workers should be classified as employees.

Federal lawmakers have largely been hands off with the gig workforce. The approach has had both “good and bad” results, Steve King, owner of research firm Emergent Research and board member and research partner of MBO Partners.

“Misclassification is a big issue and so the hands off approach on one level has been good and it has encouraged all these platforms, and these alternative working arrangements and has given the individual room to experiment,” he said. “For the people who haven’t been abused it has been good.”

There are also growing calls for states to take up the gig economy issue. Service Employees International Union Local 775 in Seattle and Uber are lobbying Washington state lawmakers to help facilitate portable benefits for gig workers. Similar ideas are being mulled by state lawmakers in California, New York, and New Jersey.

The dynamics may change at the federal level if the GOP loses control of one or both chamber in the midterm elections.

“I hope that as we do this we don’t get into some partisan thing,” because we really need to look at this for “what is really best for the workplace and for the workers,” Byrne told Bloomberg Law.

Portable benefits appears to be a term echoed by both sides of the aisle, and something on the minds of business advocates.

“I think we will get legislation that may attempt to codify the status of sharing economy workers to enable them to obtain workplace protections such as unemployment and workers’ comp as well as some kind of portable benefit plan,” Michael Lotito, co-chair of Littler Mendelson’s Workplace Policy Institute, told Bloomberg Law.

“When this report is completed, Congress must carefully review it and consider policy options that strike the right balance between appropriately supporting innovation in the economy, while still ensuring workers maintain key federal labor and employment rights and benefits,” he said.

Political observers have told Bloomberg Law that Congress may not act until after the November elections.

“When you craft policy you really have to think about the unintended consequences, and you want to do this to avoid these ahead of time,” Paul Oyer, a labor economics professor at Stanford University, told Bloomberg Law.

Congressional Republicans have floated the idea of updating the Great Depression-era Fair Labor Standards Act to create a new classification covering workers who fall between traditional employees and independent contractors. Democrats have cautioned against any changes that could lessen worker protections and push more liability on workers.

Sen. John Thune (R-N.D) last year floated a provision that would shield some employers that wrongly classify workers as independent contractors from liability under federal tax law. The provision was removed from the Republican tax overhaul measure before President Donald Trump signed it into law.

“He believes the results of the survey will show that millions of Americans are participating in the labor force as part-time, independent, or contingent workers and would gain from access to portable benefits pilot programs provided by their cities, states, or local non-profits,” Cohen said in an email. “Better data can only help build common ground for bipartisan legislative action.”

To contact the reporter on this story: in Washington at trichardson@bloomberglaw.com