The Equal Employment Opportunity Commission has filed 12 lawsuits that include Genetic Information Nondiscrimination Act claims over the past decade.
Getty Images

The Genetic Information Nondiscrimination Act of 2008 established employee protections long before 23andMe and AncestryDNA made testing information available to the masses.

It was far enough ahead of its time, in fact, that there hasn’t been a single successful lawsuit alleging discrimination by an employer using genetic information in the more than 10 years since the law has been in effect, according to legal scholars. And only 12 GINA cases have been filed by the Equal Employment Opportunity Commission—none since 2017—according to a Bloomberg Law analysis of federal district court dockets.

But if that makes GINA a non-factor as an anti-discrimination statute, it’s worked effectively as a privacy law, according to University of Houston professor Jessica Roberts. The law made it illegal for employers to access employees’ private genetic information long before that became widely available, and serves as a deterrent to them using it as a tool to screen employees for possible future health risks.

“It may have more of an impact than it might seem,” said Elizabeth Pendo, a professor at the Saint Louis University School of Law.

Workers can voluntarily turn over genetic information, in the context of wellness plans or other scenarios, but employers are still prohibited from taking adverse employment actions against the worker based on that information.

The EEOC received 220 charges from workers alleging GINA violations in fiscal year 2018, the most recent set of data available. That’s less than 1% of the 76,418 charges the agency received that year. The number of claims has consistently hovered around 200 each year; with a high of 333 in both fiscal 2013 and 2014, according to EEOC enforcement statistics.

Of the lawsuits the commission has brought, none have alleged an employer used genetic information to make an adverse employment decision, according to EEOC lawyer and GINA expert Kerry Leibig.

Cases that are brought under GINA usually relate to employers improperly getting their hands on workers’ family medical histories, she said. 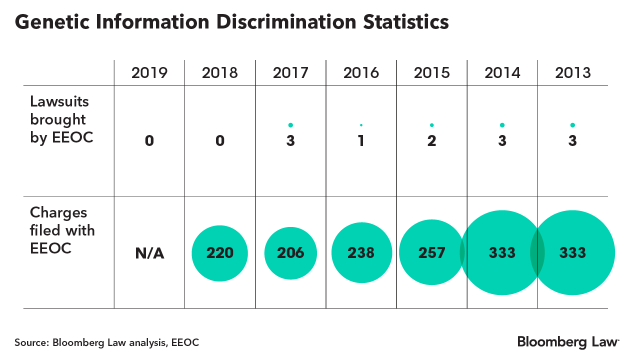 In September 2017, the EEOC sued for asking about workers’ family medical histories, and alleged separate violations of the Americans with Disabilities Act. A New York City-based home care service for seniors paid $125,000 in November 2016 to settle an EEOC lawsuit that alleged it was also asking for family medical history. Guardsmark, a security company, also paid more than $329,000 several months earlier to settle similar claims before they went to court.

Federal courts have also weighed in on GINA allegations from private plaintiffs—in a limited capacity.

A District of Arizona judge recently found that a former FIS Management Services LLC administrator couldn’t prove that his employer fired him because of biometric test results, administered as part of a voluntary employee wellness program, which indicated his elevated cancer risk.

“One of the reasons why we don’t have many GINA claims at all, and certainly not very many strong ones, is that the employer would have to know about an employee’s genetic predisposition to an illness, but that illness is not expressed,” said Mark Rothstein, founding director of the Institute for Bioethics, Health Policy and Law within the University of Louisville’s School of Medicine. “When you think about it, there just aren’t that many instances when that comes up.”

Another reason many genetic information cases aren’t successful is that plaintiffs often confuse GINA claims with what should instead be a disability discrimination claim.

Claims related to un-manifested conditions fall under GINA, while indications of an already-existing condition would fall under the ADA, Rothstein said. For example, an individual with breast cancer who claims bias under GINA isn’t a correct application of the law because the cancer is already present, he said.

ADA claims are also more all-encompassing than GINA claims. For example, if an employee believes a negative action was taken against her because her employer “regarded her as” being disabled, then she could potentially sue under the ADA, Pendo said. 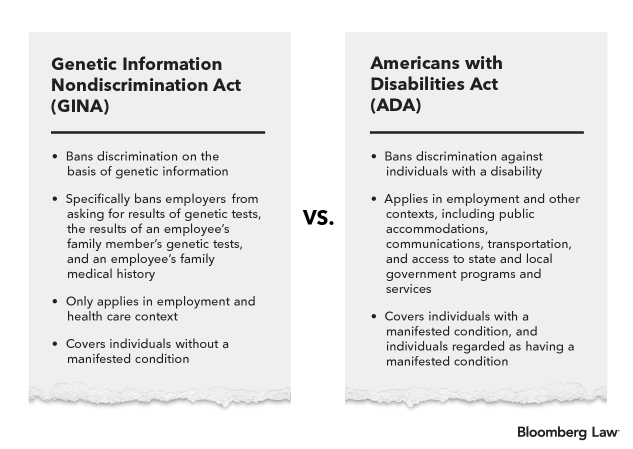 U.S. District Judge Michael Barrett, of the Southern District of Ohio, recently ruled that a woman who was fired after learning that she tested positive for the BRCA1 gene, and then pursued a double mastectomy, couldn’t pursue ADA claims. Though a worker must learn of a genetic abnormality through genetic testing, the woman opted to file under the ADA, framing her bias claims as being based on an actual disability—even though she didn’t yet have cancer.

Barrett wrote in the opinion that the fired worker didn’t provide support for her conclusion “that the BRCA1 gene, like cancer itself, is a physical impairment that substantially limits normal cell growth. And the Court’s own research has found none.”

“To expand the definition of physical impairment to include a condition that might lead to a disability in the future effectively puts every employee under” ADA protection, Barrett wrote. “That choice belongs to Congress.”

Advancements in medical technology could also further clarify whether a worker has, or doesn’t have, a manifested condition, which could more effectively sort worker claims into the ADA or GINA camps. But it comes with a catch, Rothstein said. He used the example of indications of pre-diabetes.

“You’ve got something, so you’re out as far as GINA’s concerned, but it’s not serious enough to be covered by the ADA,” he said.

To qualify as having a disability under the ADA, a major life activity must be limited. Rothstein says that pre-diabetes markers wouldn’t meet that threshold, essentially stranding the worker between the two statutes.

GINA Not a Failure

For all of its limits as an anti-discrimination statute, GINA has helped prevent genetic bias because employers can’t misuse information they don’t have, Roberts said. Employers can track potential employee pregnancies and Google can access patient data, but GINA prevents employers from seeing some sensitive and private worker data.

In one such case, an employer demanded two workers turn over saliva for testing, to compare the DNA in it to that found in feces repeatedly discovered in the business’s warehouse. Judge Amy Totenberg of the U.S. District Court for the Northern District of Georgia ruled for the employees, declaring it unlawful for the employer to have requested and obtained the genetic information.

That’s why GINA should be viewed instead as a “blueprint” for further privacy protections, which are needed “more than ever before,” Roberts said.

“Employers have the interest and have these tools, and if anything, GINA’s first 10 years demonstrate that we need better protections for employee privacy.”