Together they’ve argued almost 90 cases at the U.S. Supreme Court, spent a combined three decades as assistants to the U.S. solicitor general, and meet for lunch on a regular basis.

All five women left their positions at the solicitor general’s office to join private practice in Washington, with four of them leaving in the past year. The solicitor general’s office represents the federal government at the Supreme Court, and is sometimes called the “tenth justice” because the office participates in so many cases before the court.

The women are determined not to let the bond they created working in the SG’s office fade in the private sector, so the women formed a small “unofficial alliance”—an informal networking group of sorts—to support each other in their new positions and undertakings.

Bloomberg Law sat down with the women in the Washington office of Munger Tolles & Olson LLP, a mere four blocks away from the SG’s office, to talk about their public sector careers and goals moving forward. The conference room setting was a bit more formal than their typical lunch date, but the rapport and camaraderie among the group members was evident.

“We wanted to stay in touch, and it’s easier to do that if you put something on the calendar,” Harrington told Bloomberg Law. Harrington was an assistant to the solicitor general for eight years before joining Supreme Court and appellate litigation powerhouse Goldstein & Russell PC, Bethesda, Md., in October.

Supporting each other is just a part of their friendship, Harrington said.

“I think the collegiality in the SG’s office has made us all better lawyers as well as friends,” said Saharsky, a 10-year solicitor general’s office veteran who joined Gibson Dunn & Crutcher LLP’s Washington office as co-chair of the firm’s appellate and constitutional law practice group in November. “That’s something that we wanted to continue, especially being able to be a network for each other—a network of women who support each other.”

Sherry, deputy managing partner at Latham & Watkins LLP in Washington who left the solicitor general’s office in 2014, told Bloomberg Law the group could potentially be a resource when amicus briefs are needed for a case.

“If you’re in the Supreme Court, for example, with a case and you’re looking for amicus support, having a network of lawyers you trust and know are really good to recommend as potential authors for amicus briefs—that’s something that’s really useful,” Sherry said.

Goldenberg, a partner with Munger, Tolles & Olson LLP, told Bloomberg Law that the group could potentially judge a moot court, share business with one another if there is a conflict of interest, or work together on pro bono issues.

“Because we are friends and because we network together, that’s something that we could anticipate happening in the future in the same way that happens with other loose networks of people,” Goldenberg, who worked in the solicitor general’s office for five years, said. 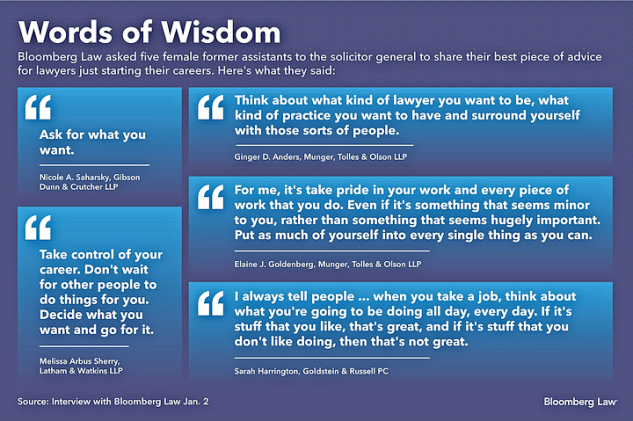 The women said their departures from the solicitor general’s office were a result of realizing it was the right time for a change in their careers.

“There has historically in the office been these waves of departures which are just a little bit of a chain reaction,” Harrington said.

Sherry, who was the first of the five to leave, said she stayed in the solicitor general’s office longer than she anticipated and moved on because she was “ready for a different challenge.”

Having colleagues like Sherry leave and seeing what work they were doing in private practice made Saharsky more interested in making the change.

Anders, who works at Munger Tolles with Goldenberg and was promoted to partner at the firm Jan. 1, said departures can also be beneficial for the the SG’s office because it can introduce “fresh perspectives.”

“After a certain point, you realize it’s time to make room for people who want to do this job,” Anders, who worked at the SG’s office for nearly eight years, said.

Anders knew she wanted to work for the SG’s office after watching lawyers from the office argue when she was a clerk for Justice Ruth Bader Ginsburg.

Likewise, the women said they bring a new perspective with them to their firms after having experience in the SG’s office. Goldenberg said those who work for the solicitor general typically emerge with a strong understanding about how the government functions and refined oral advocacy and writing skills.

The government also prepares advocates to be strategic thinkers, Anders said. “You’re not just thinking. ‘How do I win this case?’ You’re thinking ‘What can I say that will be OK down the road?’”

Anders said that mentality translates well to private practice where an attorney may be dealing with businesses that have their own institutional interests.

The group would also like to focus on sharing their knowledge and helping out young lawyers the way others helped them, Harrington said.

Several of the women pointed to former Solicitor General Donald B. Verrilli, who is currently a partner at Munger Tolles, as an example of someone who helped them early in their career.

Verrilli stepped down as SG in June 2016 and promptly opened the Washington office of the California-based firm. Goldenberg and Anders joined Munger Tolles in November and March of the following year, respectively.

Harrington said there were an equal number of male and female assistants to the solicitor general under Verrilli’s leadership.

“I don’t think he set out to do that, but I think he was happy that it happened,” Harrington said. “It was a great milestone.”

Sherry said one of her early mentors was Maureen E. Mahoney, a retired partner at Latham and a former deputy solicitor general. Sherry said she went to Mahoney and several others with government experience when she was considering the solicitor general’s office position. When they all encouraged her to try for the position, she said “that was all I needed to hear.”

Similarly, Harrington said the group also benefited from the women who came before them in the solicitor general’s office who were mentors to them.

One of Harrington’s mentors was Patricia A. Millett, an 11-year solicitor general’s office veteran who is currently a judge on the U.S. Court of Appeals for the D.C. Circuit. Harrington said Millett helped her in her career and she hopes to do the same for other women who are just starting out in the legal profession.

Although Harrington is the only woman partner at her small firm, her firm has one female associate. She also said she’s hopeful about opportunities to help women in the appellate law community in Washington advance their careers.

Harrington said it’s important to realize that “once you’ve reached a certain level of success, then you should share the wealth in terms of work.” Part of this comes with sharing arguments, which she said are “sort of the currency for appellate lawyers.”

Anders said the women are “all very conscious of our mentoring responsibilities” after holding a position as coveted as their former government role. Anders and Goldenberg have plenty of opportunities to help women lawyers in their office as there are seven women in the 12-person office.

Over at Gibson Dunn, Saharsky has taken on a similar mentoring role for associates in her firm who are interested in appellate practice. Saharsky said the associates she’s worked with are typically interested in arguing a case at the appellate level, so she uses her expertise to help them find an argument and guide them through the process.

Echoing Saharsky, Sherry said having someone in an office who has followed a certain career path can help younger lawyers “realize that it’s something that can be done.”

To contact the reporter on this story: Madison Alder in Washington at malder@bloomberglaw.com