A mother gives a bottle to her baby.
FRED DUFOUR/AFP/Getty Images

Sunday is Mother’s Day. Many of us will send flowers, gifts, and cards, some of which will be delivered to mom at the office.

The majority of modern mothers will have worked while raising their children. Seventy percent of women with children under age 18 held jobs in 2013, according to the most recent data from the Labor Department’s Bureau of Labor Statistics. Fifty-nine percent of mothers who worked full time during their pregnancy returned to work within three months of giving birth, the National Partnership for Women and Families reported in 2016.

What was once considered a private family matter is now a matter of public policy and legislation. States are becoming increasingly active in this arena, with many providing additional protections for pregnant workers that go beyond federal requirements in the federal Pregnancy Discrimination Act and Family and Medical Leave Act.

That means expectant mothers, and employers with mothers-to-be on the payroll, can face a wide array of legal protections and requirements depending on the state in which they live.

For example, Massachusetts earlier this year became the latest state to enact a maternity leave law. Shortly thereafter and just a bit over the state line to the north, New Hampshire’s Senate killed a bill that would have created a state insurance program to financially support mothers on maternity leave.

Certain federal laws apply directly to pregnant workers. For maternity leave, the FMLA allows for 12 weeks of unpaid leave to qualified new parents and guarantees a job will be held open for them.

As for discrimination, the PDA amended a portion of one of the nation’s major civil rights laws, Title VII of the 1964 Civil Rights Act. That amendment clarified that pregnancy discrimination is a form of sex discrimination and that any woman rendered unable to perform her work due to a pregnancy- or childbirth-related medical condition must be treated by her employer the same as they would treat any worker considered to be temporarily disabled.

Individual states have enacted legislation to cover pregnant workers, too. They’re free to do so as long as their laws don’t limit federal law. Some states mirror federal legislation while others provide extra protections.

For example, reinstatement to the same or a similar job upon a worker’s return from maternity leave is already guaranteed to workers who take leave under the FMLA. But the FMLA only covers about 60 percent of the workforce, Vicki Shabo, vice president for workplace policies and strategies at the National Partnership for Women and Families, told Bloomberg Law. That’s because the FMLA only applies to employers with at least 50 employees and to employees who have worked at least 1,250 hours over a 12-month period.

Twenty-nine states, Puerto Rico, and the District of Columbia provide some degree of their own protections to pregnant workers that run alongside federal laws, according to Bloomberg Law data. Fourteen of those jurisdictions provide pregnant workers an explicit right to reinstatement. 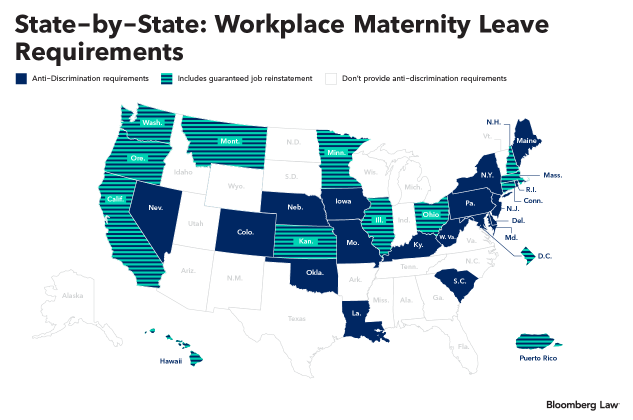 Two notable state laws have gone into effect in 2018. California’s New Parent Leave Act, which entered into force Jan. 1, adopts the FMLA’s 1,250-hour requirement for employees to become eligible. But it ropes in more employers than the FMLA because it applies to workplaces with at least 20 employees.

Across the continent, Massachusetts’ new Pregnant Worker Fairness Act applies to employers with as few as six employees.

Arizona, Maryland, and Virginia also have pending family leave bills working their way through their legislatures, according to Bloomberg data.

Some employers go beyond keeping the seat warm for mothers out on maternity leave. They encourage new parents to talk to each other about shared experiences and challenges in balancing career aspirations and family life.

Two Jackson Lewis attorneys, Alison Lynch and Nicole Shaffer, started a small resource group for fellow parents in their Orange County, Calif., office. They’d both recently returned from maternity leave and were struggling with feeling unorganized, fatigued, and guilty for going back to work.

The firm soon expanded their quarterly Practicing and Parenting meetings across the firms’ 50-plus offices.The conversations and support in the resource group “make a huge difference in these young attorneys’ mental state, which helps with their productivity and success at work,” Jackson Lewis Chairman Vincent Cino told Bloomberg Law.

Anti-discrimination laws prohibit employers from firing mothers and pregnant workers for having or expecting children, but new-parent resource groups are a way employers can show that having children is openly valued by the company, Shaffer and Lynch said.

They’ve each gone on to have a second child and to become Jackson Lewis equity partners.

Cino said Jackson Lewis’ family-friendly approach, with the resource group and flexible work arrangements and generous leave policy, has attracted a number of lateral attorneys rather than been a strain on the firm’s resources.

Attracting and retaining talent isn’t a magic formula, he told Bloomberg Law. “You just have to make sure you’re embracing accommodations and keeping an even playing field, no matter the minority group. That’s the key to successful integration,” Cino said.

There are still some coverage gaps that advocacy groups like the National Partnership for Women and Families are trying to get lawmakers to fill. One is that the federal FMLA only guarantees the right to take unpaid leave; it doesn’t require employers to pay a worker during leave.“About 30 states have looked at paid family leave over the past year,” Shabo said. “States are and have always been wonderful laboratories for democracy and innovation, but federal legislation would be more efficient.”

That’s why the National Partnership supports the FAMILY Act (S.337, H.R. 947), congressional legislation that would pay workers a portion of their wages while they are on parental leave. The funds would come from a national insurance program that would be established by the proposal. Rep. Rosa DeLauro (D-Conn.) and Sen. Kirsten Gillibrand (D-N.Y.) are sponsoring the bill.

Another piece of federal legislation, the Pregnant Workers Fairness Act (S. 1101, H.R. 2417), would ensure reasonable accommodations for pregnant workers, rather than only requiring employers to accommodate pregnant workers in the same way as they treat their disabled workers.

But other issues remain. The close relationship between unpaid leave and unstable child care concerns Shabo, as does the scarcity of affordable infant care. The “myth of rugged individualism,” as Shabo calls it, has “reinforced the idea that money and family are private issues, rather than common challenges.”

But at least one state known for its rugged individualism has shown it’s willing to address this common challenge in an innovative way.

Nebraska, a state that voted Donald Trump’s way by 25 percentage points in the 2016 presidential election and is led by a Republican governor, Pete Ricketts, announced in January a leave-sharing program for state employees. State workers with paid leave to spare can donate it to their co-workers out on maternity leave.

“Women and men are equal participants in our labor force and should be, too, in our economy,” Shabo said. “So what’s good for women, like being protected and supported in their jobs, is going to be good for the rest of us, too.”

To contact the reporter on this story: in Washington at pwells@bloomberglaw.com