Florida’s new law prohibiting concepts based on critical race theory from mandatory workplace trainings leaves the state’s employers with three options to continue racial diversity trainings: adjusting them, making them optional, or doing away with them all together.

To Tammy Hodo, president of All Things Diverse LLC, a Florida-based diversity training company, none of those are acceptable. If employers aren’t willing to present her trainings—which include modules on systematic racism—as they come, “I’m not going to water down what needs to be said and done, that’s a no-go for me,” Hodo said.

Hodo predicts most employers will make their trainings optional or “surface-level.” Doing away with them is what concerns Cindy-Ann Thomas, co-chair of Littler Mendelson PC’s employment and diversity practice. She said the law is so ambiguous that it will be difficult for employers to have any conversations about race without being exposed to liability.

“I have to wonder if it was drafted to be intentionally confusing, so it would almost chill employers’ desire to forge ahead in the [diversity equity and inclusion] space out of sheer concern that they may be violating the law,” Thomas said.

Trainings that endorse certain concepts related to systematic racism, sexism, and privilege amount to discrimination, according to the The Stop WOKE Act, which was signed by in April and took effect July 1. 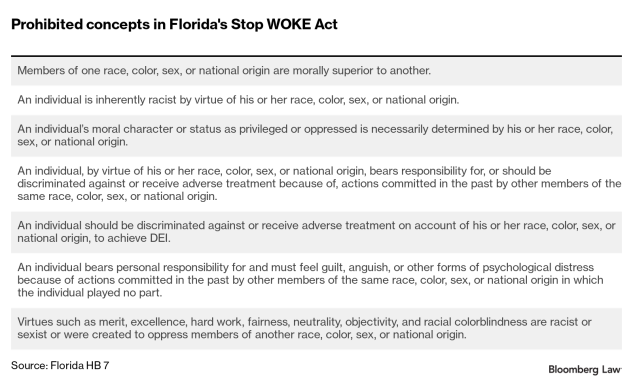 Among the prohibited concepts are ones that emphasize that an individual “by virtue of his or her race, color, sex, or national origin, bears personal responsibility for and must feel guilt, anguish, or other forms of psychological distress because of actions, in which the individual played no part, committed in the past by other members of the same race, color, sex, or national origin.”

Although the law is targeting DEI programs, the topics the law identifies may be embedded in a company’s employee handbook or even its mission statement.

“In layman’s terms, this law is outlawing discomfort,” Thomas said. “And the reality is you can’t experience growth without discomfort. If employee growth is stunted, employer growth is also stunted.”

The most conservative strategy is to hold off on trainings and wait for more guidance, either by the state or federal courts, Thomas said. The second most conservative approach is to not stop trainings, but to alter them to comply with the law as best at possible. A few “risk-takers” may consider not changing their trainings at all.

“The people who need to be there, if it’s not mandatory, they’re not going to be there,” Hodo said.

Constraints on the types of conversations employers can have could have a severe impact on workplace culture, Thomas noted. And a company with poor culture is ripe for complaints of discrimination or harassment, Thomas noted, exposing employers to more legal liability.

“Companies are finding themselves between a rock and hard place,” she said. “They need to do what they can to be able to have their affirmative defenses available to them in the event of a challenge related to harassment or discrimination.”

Employers have no reason to stop DEI trainings altogether, according to Sharon Perley Masling, a partner at Morgan, Lewis & Bockius LLP.

The key may be to work around race.

Inclusivity based on age, disability status, or sexual orientation, for example, is not in the purview of the legislation, she said.

“There are many DEI topics that are extremely important in creating a diverse and inclusive and equitable workplace that are not on the list of prohibited concepts,” Masling said. “So it doesn’t mean that employers have to stop mandatory training, it just means employers have to be careful.”

Two public school teachers, a college professor, a young student, and a consulting firm that provides implicit bias training to law firms and other entities sought a preliminary injunction blocking the law, which they called vague and overbroad. That lawsuit was filed in a federal court in Florida in April, before the law went into effect.

In denying the injunction on June 27, US District Judge said that while the plaintiffs in that case lack standing for an injunction, the points raised still warrant discussion, and whether the law is constitutional will be decided at the motion to dismiss stage.

Another case was filed the same week as that ruling, this time by a private employer. Employers in Florida will be keeping a close eye for rulings in both cases for any clarity that may come from the courts, according to Marisol Ruiz, a Florida-based attorney at Fisher & Phillips LLP.

“Overall, the [first] case is not going anywhere helpful for private employers,” Ruiz said. “However, it may be a few weeks to a few months before we see anything unraveling from that case.”

Laws like Florida’s may become a trend in states with conservative legislatures. But on the federal level, some federal contractors may remember having to comply with a short-lived Trump administration executive order that banned “divisive” workplace diversity trainings that discussed concepts such as “White privilege.”

The September 2020 order was partially blocked by a preliminary injunction, and President Joe Biden revoked it the day he took office. In that case, which was brought by the Santa Cruz Lesbian and Gay Community Center, US District Judge ruled that “training on unconscious bias is critical to Plaintiffs’ missions and their work” and the ambiguity in the government’s order would cost them.

To contact the reporter on this story: in Washington at jmorenodelangel@bloombergindustry.com