A person takes part in a ceremony to become a U.S. citizen in 2018.
Photographer: Joe Raedle/Getty Images

Next year is a big year. It’s an election year. It’s a leap year. It’s the start of a new decade. Someone you know is turning 40.

And 2020 also promises to be a big year for employment-related immigration developments.

Here are the top five to watch. 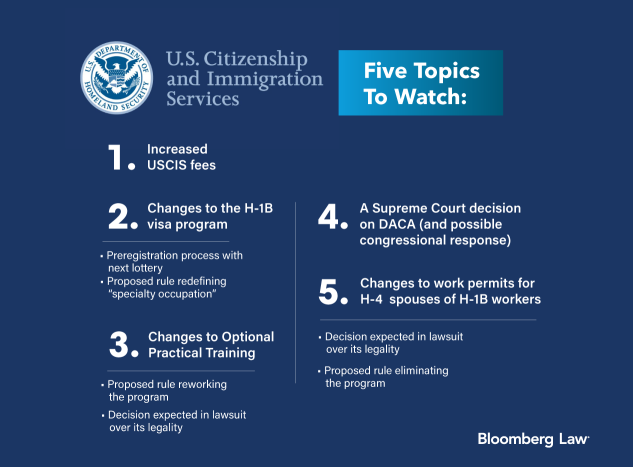 Applying for a visa will get a lot more expensive. That’s if the final version of U.S. Citizenship and Immigration Services’ new fee schedule looks anything like its proposal—and it likely will. And that fee increase will be especially acute for employers of temporary foreign workers.

For instance, the agency is proposing a 22% increase in the base fee for an H-1B specialty occupation visa petition. But it’s also proposing to require companies with at least 50 U.S.-based employees and with 50% or more of their workforce on an H-1B or L-1 intracompany transferee visa to pay an extra $4,000 every time they extend a worker’s visa.

That’s a real issue for information technology consulting companies, which have been receiving H-1B approvals for only a few weeks or months at a time, requiring multiple extensions in a single year just to keep the same workers on a project. “It’s just going to be a nightmare,” said New York immigration attorney Cyrus Mehta.

Electronic preregistration for the H-1B lottery becomes official March 1, 2020. Authorized by a January 2019 regulation, the new process will allow employers to enter the lottery for the 85,000 visas that become available Oct. 1, 2020, without having to prepare a full petition and supporting documentation.

Preregistration has the potential to streamline the H-1B application process, but also could cause problems for smaller employers trying to compete for the visas.

“It seems that this will encourage the nameless, faceless, applicant getting a better shot,” said Anastasia Tonello, managing partner of Laura Devine Attorneys in New York and the immediate past president of the American Immigration Lawyers Association.

Also expect to see a new proposed rule from the USCIS that would redefine an H-1B “specialty occupation” to restrict eligibility to the “best and brightest” applicants. The proposal likely will reflect how the agency already is treating H-1B petitions, but codifying the practice would make it more difficult for businesses to challenge visa denials in court.

The U.S. Supreme Court likely will rule in June on whether the Trump administration legally ended the Deferred Action for Childhood Arrivals program, which provides deportation protections and work permits to young, undocumented immigrants who came to the U.S. as children.

The justices’ reaction to oral arguments Nov. 12 appears to indicate that the court will back the administration’s curtailment of the seven-year program.

One report by pro-immigration groups that ending DACA will result in an average of 30,000 DACA recipients losing their jobs every month. Another report concluded that removing DACA workers from the economy would cause a $460.3 billion drop in the national gross domestic product over the next decade.

The question remains whether Congress would be willing to pass legislation providing legal status to DACA recipients so close to the election. The House passed such a bill in June, but the Senate hasn’t made any move to take it up.

Optional practical training, which allows foreign graduates of U.S. colleges and universities to work in the U.S., could see big changes next year.

A federal judge in Washington has indicated a willingness to entertain a lawsuit by a group of U.S.-born tech workers who say OPT is illegal and harms their job prospects. The potential for the case to upend OPT recently prompted a wave of amicus briefs.

“Without OPT and STEM OPT, employers would suddenly find fewer STEM-educated persons to take positions in the United States for jobs that cannot be filled with native employees alone,” according to one brief filed by 52 businesses and 11 industry associations.

Immigration and Customs Enforcement, which manages OPT, also has revived its plan to overhaul the regulations governing the program. That change, combined with another proposal to limit how long international students can remain in the U.S., could upend how the program operates in the future—if the courts allow it to continue.

A longtime Trump administration promise to rescind a program providing work permits to certain H-4 spouses of H-1B workers likely will come to fruition in 2020.

A Homeland Security Department proposal has been under review at the White House Office of Management and Budget since February 2018. The agency now anticipates a spring 2020 release for public comment, which would mean a summer or early fall implementation of the final regulation.

A lawsuit against the program brought by U.S.-born tech workers also recently gained traction when a federal appeals court in Washington said the workers showed that it’s causing them to face increased job competition. Now back with the federal district court, the case could result in a finding next year that the program is illegal.