Members of the nation’s largest firefighters’ union want their organization to stop accepting funds from gear makers until they commit to ridding the garments of so-called “forever chemicals.”

Manufacturers of protective garments worn by firefighters have given at least $420,000 to the International Association of Fire Fighters since 2016, according to a review of federal disclosures by Bloomberg Industry Group.

A resolution will be up for debate at the union’s upcoming annual convention Jan. 25-28. It asks the IAFF “to no longer accept sponsorships from the chemical industry, textile manufacturers, or PPE [personal protective equipment] manufacturers.” Convention delegates will be able to amend the resolution’s language before voting to approve or reject it.

A second proposal asks the union to seek further testing on the presence of the chemicals in gear, and work with manufacturers to develop safer alternatives.

The moves are among the first member-driven attempts by the 323,000-person union to get suppliers to work on developing gear that doesn’t contain chemicals known as PFAS, or for per- and polyfluoroalkyl substances.

“I don’t think it’s heavy lifting so to speak,” said Jason Burns, former president of IAFF Local 1314 in Massachusetts. He backs the resolution addressing sponsorship and advised its drafting. “If we say don’t take the money, we’re not crippling our organization financially. That’s something our organization can and—because of the health impacts—should deal with.”

The transactions represent a small fraction of the overall IAFF’s overall revenue stream. The union reported net assets of more than $23.5 million at the end of 2019.

One resolution calls out a history of “biased science,” while the other says that “current bunker gear manufacturers continue to deny the potential for any health problems created by their use of PFAS.”

The union said it is “a leader in forcing changes in the industry when data and science show a link between any chemicals, including PFAS in fire gear, and occupational cancer in firefighters,” IAFF spokesperson Doug Stern said in a statement.

PFAS are a group of human-made chemicals that first hit the market as coatings for Teflon pans in the 1950s and are now found in products like microwave popcorn bags, pizza boxes, carpets, and cosmetics.

Thousands of chemical compounds are categorized as PFAS, including PFOS, which has been used in firefighting foams and PTFE, used in manufacturing firefighting turnout gear. The substances are known for their stability, and water and heat resistance.

The IAFF is currently engaged in three studies analyzing the effects of PFAS on firefighters. The results haven’t yet been published.

“The extensive work of the IAFF in researching PFAS exposures and firefighter cancer is one important element of the much broader work that we do to combat the elevated rate at which firefighters contact cancer,” Stern, the spokesperson, said.

Currently, firefighters have no choice but to wear PFAS-laden protective clothing as no alternatives are on the market. Concerned about possible health risks, they are demanding changes.

Gear makers insist that their products have been tested and are safe.

Turnout gear manufacturer Globe—owned by MSA Safety Inc.—said it doesn’t add or use PFAS in any of its manufacturing processes. But the company also said it doesn’t manufacture the raw materials or fabric that goes into its products, and that textile suppliers serving the entire fire industry use PFAS for water, oil, or chemical resistance.

“As industry leaders in firefighter protective equipment, we work to provide fire departments with innovative personal protective equipment that meets or exceeds NFPA standards, improves their members’ performance, and helps guard against the health and safety risks that firefighters may face,” MSA Safety spokesperson Samantha D’Uva said in a statement, referring to the National Fire Protection Association that sets safety standards for turnout gear.

W.L. Gore, a maker of moisture barriers for firefighting gear, said that it is aware of the IAFF resolutions and stands by the integrity of its products, which have passed rigorous safety requirements.

The company said it is “simply unable” to respond to all of the specifics offered to support a proposed PFAS ban, or to address all components of personal protective equipment because “PFAS is a broad class of materials, many with very different properties,” according to spokesperson Amy Calhoun.

The IAFF reported at least $476,161 in transactions with companies and individuals tied to the manufacturing of turnout gear or firefighting foam between 2016 to 2019, according to the union’s financial disclosures.

At least $421,400 was specifically designated by the union as sponsorship, exhibitor, or advertising revenue. Contributions that companies made to the union’s charitable organization, the IAFF Foundation, were not included in this tally.

“The IAFF’s dedication and drive to protecting firefighters and keeping them healthy and safe is influenced only by data and science,” Stern, the IAFF spokesperson, said. “Sponsorships have never affected union policy or decision-making, and any assertion otherwise is reckless and baseless.” 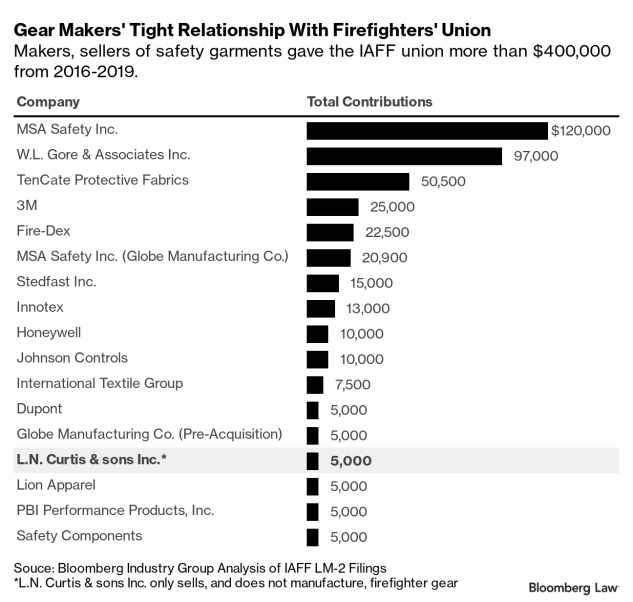 MSA Safety Inc. paid out at least $120,000 to the IAFF between 2016 and 2019—the largest amount of any organization in the turnout gear industry during that time. An individual associated with Globe, turnout gear manufacturer MSA purchased in 2017, separately paid the union $15,900 for advertising in 2019. Globe also paid $5,000 for a symposium sponsorship in 2017.

The majority of MSA Safety’s funding went directly to the IAFF Foundation, supporting charitable support and direct assistance to firefighters, according to D’Uva of MSA Safety.

“Like many manufacturers in the fire service, we also place digital and print advertisements in the IAFF’s quarterly publication and sponsor various events throughout the year,” D’Uva said in a statement. “The contributions for these initiatives represent a small portion of MSA’s financial contributions to the IAFF.”

W.L. Gore’s engagement with the union has allowed it to better understand the needs of firefighters and “better apply our material science expertise,” Calhoun said.

The total money pulled in from industry groups and manufacturers may be much higher than the nearly half-million dollars identified, as not all transactions are itemized with a clear description of how the money was spent.

‘Really Came to the Table’

The relationship between the labor union and industry was on display in February 2018, when the IAFF hosted an inaugural Cancer Summit for its members.

IAFF General President Harold Schaitberger took the stage in Lake Buena Vista, Fla. After a moment of silence honoring firefighters who died in the line of duty from cancer, he asked those gathered to applaud the chemical makers and gear manufacturers who had sponsored the conference.

“I’d like to start by, first of all, thanking our sponsors: TenCate, W.L. Gore, Globe MSA, Dupont,” Schaitberger said. “They really came to the table to provide everything we needed to put together this Cancer Summit and covered virtually all the costs associated with it, including this morning’s breakfast, today’s lunch, and so much more.”

A screenshot from a recording of the IAFF’s 2018 Cancer Summit displays the event’s sponsors.
Screenshot: ‘IAFF Cancer Summit: Morning Session’ via YouTube

The sponsors Schaitberger named are now all defending against criticism and lawsuits that say their manufacturing processes have resulted in cancer outbreaks across the country.

“How can anyone expect that we’re going to appropriately view our personal protective equipment, and the needs and the requirements objectively, when all of these meetings are being funded by manufacturers?” he asked.

Firefighters who assisted in drafting the two resolutions said that they were driven to action by the alarming number of cancer cases they’ve seen.

Orlando Professional Firefighters Local 1365 President Ron Glass, who helped draft one of the resolutions, said he’s lost two firefighters in his local union to cancer in the past year or so. One of those firefighters was 48 years old and had been battling cancer for nearly 20 years.

“Something’s not adding up within the industry itself,” Glass said. “I could see if it was just isolated to one or two cases. But when you have five young firefighters that all come down with the same type of cancer over a five-year period, then there’s an issue out there. And I think we have an obligation as a union to study this.”

The resolutions are a welcome relief to Diane Cotter,wife of a firefighter diagnosed with cancer. She’s spent years advocating against the dangers of PFAS in gear, and helped bring about a study by Notre Dame physicist Graham Peaslee that exposed high levels of PFAS in turnout gear.

Cotter said in a statement that she and her husband, Paul Cotter, are “delighted to see PFAS resolutions that acknowledge the need for independent, peer-reviewed science for turnout gear.”